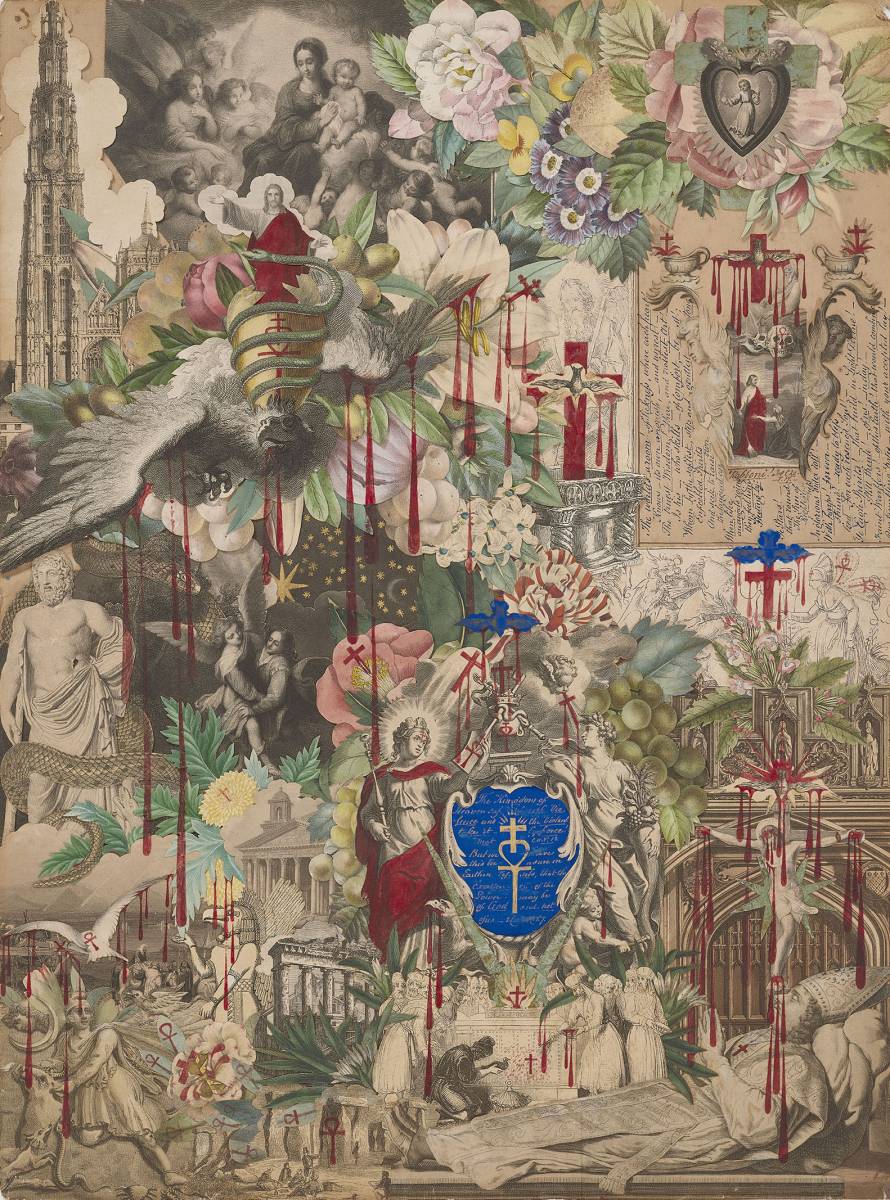 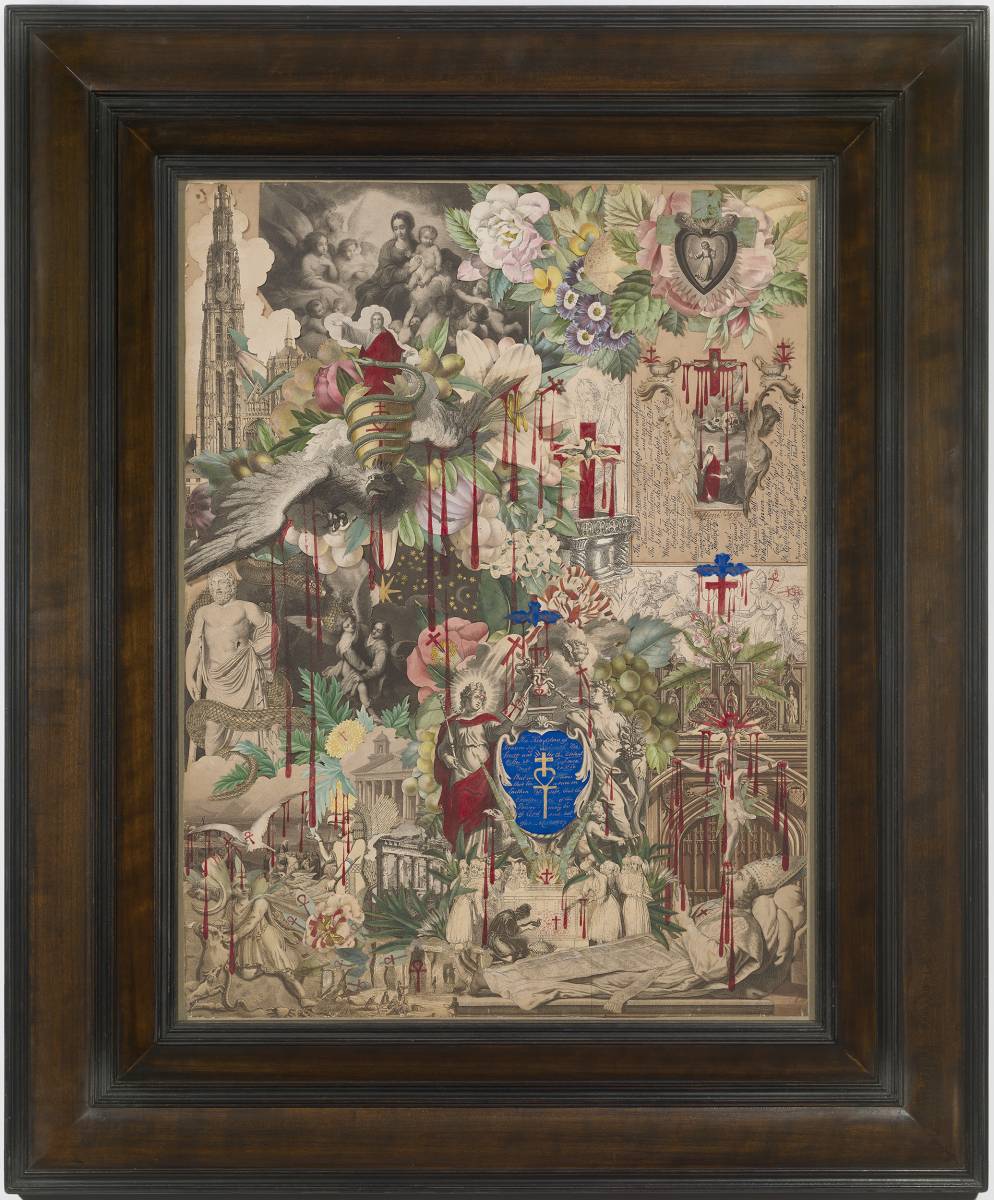 This collage is one of the most impressive from a group made by the remarkable outsider artist, John Bingley Garland. The present large-scale sheet was acquired by the celebrated dealer and collector Christopher Gibbs in 1990 from the collection of Peter Burne-Jones. Gibbs sold several from the group but retained these three as the most compelling examples and they remained at his set in Albany until 2019. The three sheets represent particularly dextrous examples of image making, Garland has combined carefully collaged old master engravings, prints after antiquities and coloured prints of natural history specimens with gold paper, ink inscriptions and his characteristic drops of red India ink blood. The composite images Garland constructs are far more sophisticated than those in the other famous group by him that survive, the so-called ‘Victorian Blood Book’, originally from the library of Evelyn Waugh and now at the Harry Ransom Center at the University of Texas at Austin.[1] In this almost hallucinogenic collage Garland has carefully created an intense, Baroque composition, drawing from multiple sources to produce a remarkably cohesive design. 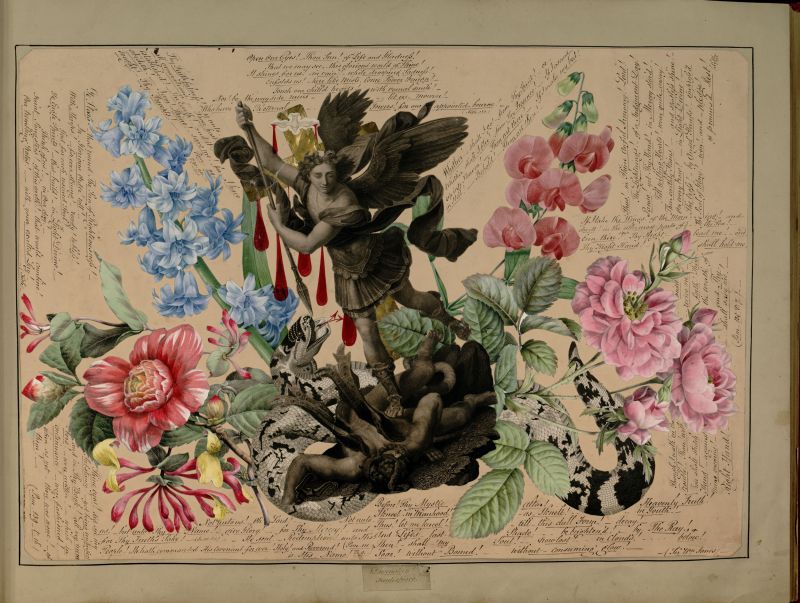 John Bingley Garland
Durenstein! Frontispiece!, a leaf from the Waugh Blood Book
Collage of engravings with gouache and gold paint with extensive inscriptions in pen and ink on buff backing paper
Harry Ransom Center, The University of Texas at Austin (Evelyn Waugh Collection)

This extraordinary sheet displays a sense of horror vacui, the densely covered surface unified by long, pendulous drops of blood running down the collaged elements. Garland has carefully inscribed text from John Keble’s The Christian Year in a box on the right-hand side of the sheet. The densely layered surface is filled with a profusion of prints of both Christian and pagan subjects: Mithras and the bull, Aesculapius, Stonehenge, along with Jacob wrestling the angel and the virgin enthroned. At the centre Christ emerges from an egg, born aloft by an eagle and encircled by a serpent. Antiquarian prints of a bishop’s tomb and a modern engraving of the spire of Antwerp Cathedral offer a backdrop for the more minutely composed Christian iconography. Garland has added cheap coloured prints of flowers and fruit, of the type mass-produced for scrapbooks, using them to subvert the sense of scale: giant bunches of grapes and monstrous lilies dwarf human figures. Garland further adds to the surreal nature of these quotidian prints by transforming the stamen of the flowers to red crosses dripping blood.

John Bingley Garland
The Torch! no.3, a leaf from the Waugh Blood Book
Collage of engravings with gouache and gold paint with extensive inscriptions in pen and ink on buff backing paper
Harry Ransom Center, The University of Texas at Austin (Evelyn Waugh Collection)

There is evidence that, for Garland, these were objects of great emotional significance, made to communicate his deeply felt religious convictions. As Freya Gowrley has observed: ‘the emotional and affective qualities of collage made during this period are amongst its defining features.’[2] Few practitioners were as explicit in their emotions than Garland. A large collage by Garland, of engravings and photographs heightened with gouache, but without Garland's characteristic dripping blood motif, bearing a title taken from a verse in Ecclesiastes (chapter 12, verse 7) 'Or ever the silver cord be loosed Or the golden bowl be broken... ', was with Peter Nahum at the Leicester Galleries. Signed and dated 'J Bingley Garland Stone Cottage 8 Aug 1865 ', it bears a long inscription on the verso, beginning 'For Agnes Arthur nee Crawford - presented by John Bingley Garland. as the work of his fingers in his seventy-fourth year and as a remembrance of Auld Lang Syne in the years 1805 and 1806', followed by an extensive quote from The Feast of Life, a lugubrious poem by L. E. Landon. Garland’s annotations were specifically designed to inform the complex iconography of collaged and drawn elements. More work needs to be done to fully understand the meaning of this work, but as an image, it ranks as one of the most complex graphic works produced by an amateur artist in the middle of the nineteenth century.