‘It speaks to us in a more dreadful whisper of the horrors of war than all the peace speeches ever made.’

This raw, uncompromising drawing of decomposing corpses was made by Edward Armitage in March 1855 following a visit to the site of the Battle of Inkerman. One of the bloodiest engagements of the Crimea War, the Battle of Inkerman, which had been fought in November 1854, became celebrated for the tenacity of Anglo-French troops in the face of a far larger Russian force; despite being outnumbered, the allies held their ground, paving the way for the Siege of Sevastopol and the eventual Russian defeat.

Edward Armitage, a successful young historical painter, was sponsored by the art dealer Ernest Gambart to travel to the Crimea in late 1854, shortly after news of the battle had arrived in London. Gambart was a hugely entrepreneurial dealer and print publisher, he commissioned Armitage to produce a series of grand canvases celebrating battles in the war, which he planned to reproduce and sell as prints. In March 1856 Armitage’s two large-scale battle paintings, The Battle of Inkerman and The Charge of the Heavy Brigade were shown at Gambart’s French Gallery, 121 Pall Mall. In the same year, Armitage exhibited this extraordinary, large-scale drawing at the Royal Academy. In contrast to Armitage’s set-piece battle scenes, this exceptional work was recognised by contemporaries as chillingly communicating the realities of war. As the anonymous reviewer in The Athenaeum noted: ‘it speaks to us in a more dreadful whisper of the horrors of war than all the peace speeches ever made.’

Armitage was unusual amongst his British contemporaries. Born into a wealthy family, his father was an ironmaster from Leeds, Armitage was trained in Paris, not at the Royal Academy in London. In 1837 he enrolled at the École des Beaux-Arts in Paris, joining the atelier of Paul Delaroche. Armitage was one of the four students selected to assist Delaroche in executing his frescos, in the Palais des Beaux-Arts. The vast, multi-figured frieze was commissioned by the architect Félix Duban to decorate the amphitheatre of the École des Beaux-Arts. The painting itself comprises portraits of seventy-five great artists of all ages in conversation, with Phidias, Ictinus and Apelles enthroned at the centre flanked by the muses, Armitage reputedly modelled for the head of Masaccio. Through Delaroche, Armitage received a rigorous training, which privileged draughtsmanship and high technical finish.

Throughout the 1840s Armitage had a series of exhibition triumphs. In 1843 his cartoon, Julius Caesar’s First Invasion of Britain, secured one of the three first-prize premiums of £300 in the competition to decorate the new houses of parliament in Westminster. His cartoon for The Spirit of Religion won the premium of £200 in 1845 and he announced himself as a major battle painter in 1847 with The Battle of Meanee. Exhibited at Westminster Hall in 1847 the large, multi-figured composition caused a sensation and was awarded a premium of £500. Queen Victoria visited the exhibition purchasing the painting for £400, it remains in the Royal Collection.

The success of such an ambitious and complex work as The Battle of Meanee made him the obvious choice for Gambart to send to the Crimea. The war had begun in 1853 and allied forces had landed on the Crimean Peninsula in September 1854, winning the Battle of Alma shortly afterwards. The Russian counterattack in October saw the allies defeated at the Battle of Balaclava, but a second Russian counterattack at Inkerman was repulsed. At no time during the battle did any unit larger than a regiment act against the enemy. Many soldiers resorted to the bayonet, stones and fists when the heavy rain touched their cartridge powder. The courage and tenacity of the British rank and file meant that Inkerman was almost immediately known as the ‘Soldiers’ Battle’.[1] 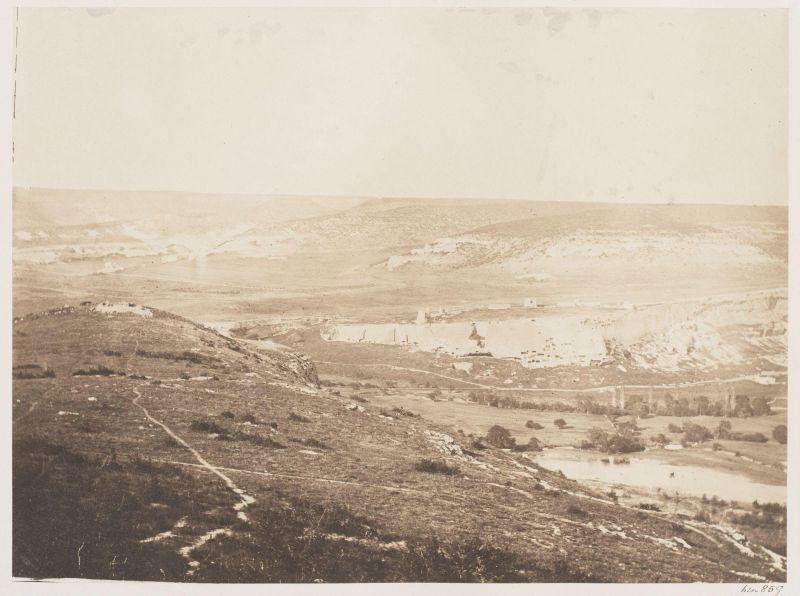 We know from the evidence of a series of drawings that Armitage had arrived at Balaclava by 7 January 1855. His drawings hint at the structural problems the British were facing in the harsh Crimean winter, particularly the lack of adequate transport; one drawing shows soldiers trudging through the mud carrying vital supplies. He made a series of studies of the sutler’s camp and the army cemetery at Cathcart’s Hill. The Illustrated London News published Armitage’s portraits of the British commanders Lord Raglan and Rear Admiral Sir Edward Lyons along with the French divisional commander Pierre Bosquet.[2] The Art Journal recorded Armitage’s return to Britain by October 1855 when it noted that he was preparing ‘two large pictures of the battles of Inkermann and Balaklava.’ The notice added: ‘he has recently returned from the Crimea with a number of sketches of the scenery amid which those glorious struggles took place, and of portraits of many of the most distinguished actors. But Inkermann and Balaklava, though of undying interest, have since been absorbed in that which attached to the last tremendous conflict on the shattered bulwarks of Sebastopol. We shall not be surprised to see this illustrated on the walls of the Academy next year; for our artists, like our soldiers, have rushed into the thickest of the fight to pursue their art, which in such cases can scarcely be called ‘a peaceful art.’[3]

Armitage did indeed produce the two celebratory canvases for Gambart, but chose something far more ruminative and equivocal for the walls of the Academy, the present study of corpses which he gave the title ‘The Bottom of the Ravine at Inkermann’. The Battle of Inkerman resulted in some 15,000 casualties and several thousand decaying corpses remained on Inkerman ridge for the duration of the war.[4] When the present work was shown at the Royal Academy it is specifically listed as having been made ‘from a sketch taken on the spot, four months after the battle.’ Armitage shows fallen soldiers, their nationalities unknown, lying amidst a thicket, the ground punctuated by little clumps of white snowdrops and yellow crocuses, the first spring flowers. The ground is littered with the detritus of battle: a Russian cap, the bolt of a rifle and in the foreground the distinctive regimental badge of the Grenadier Guards. Above this scene of death, Armitage has included a pair of white butterflies, suggestive of the soul’s flight. Richly worked in black chalk on unprepared canvas, Armitage has confined colour to small, localised areas: the March flowers in yellow and white, bluey grey of a ragged greatcoat and faded red of a pair of trousers.

In spirit and approach, this grand drawing could not be further from the highly academic, celebratory works produced for Ernest Gambart. The deliberate anonymity of the soldiers – they could be fallen allied troops or equally Russian – and the sense of nature reclaiming the battlefield points to an undercurrent of disquiet at the course of the war and its human cost; this was how contemporaries read the work. The Crimean War was the first conflict to be reported extensively by war correspondents, the first to be photographed and the first to be covered extensively in the illustrated London papers. As the Siege of Sevastopol dragged on through 1855, the welfare of soldiers, their hygiene, health and conditions became a matter of public debate. By May 1856, when Armitage’s drawing was shown at the Royal Academy, public opinion in Britain was outraged at the logistical and command failures of the war; newspapers demanded drastic reforms, and parliamentary investigations demonstrated the multiple failures of the army. As such, Armitage’s Ravine at Inkerman, celebrates the sacrifice of life on all sides and points hauntingly to the human cost of the conflict. Technically it owes much to Armitage’s training with Delaroche, compositionally it may owe something to Delaroche’s Saint Véronique now in the Louvre, which had been completed in 1855. The expertly foreshortened corpses recall academic nudes, whilst the level of putrefaction and decay reminds the viewer that these were once vigorous young men. Although completed in 1856 Armitage’s chilling depiction of corpses in the Crimea has renewed relevance for us today, as that region is once again plunged into conflict.