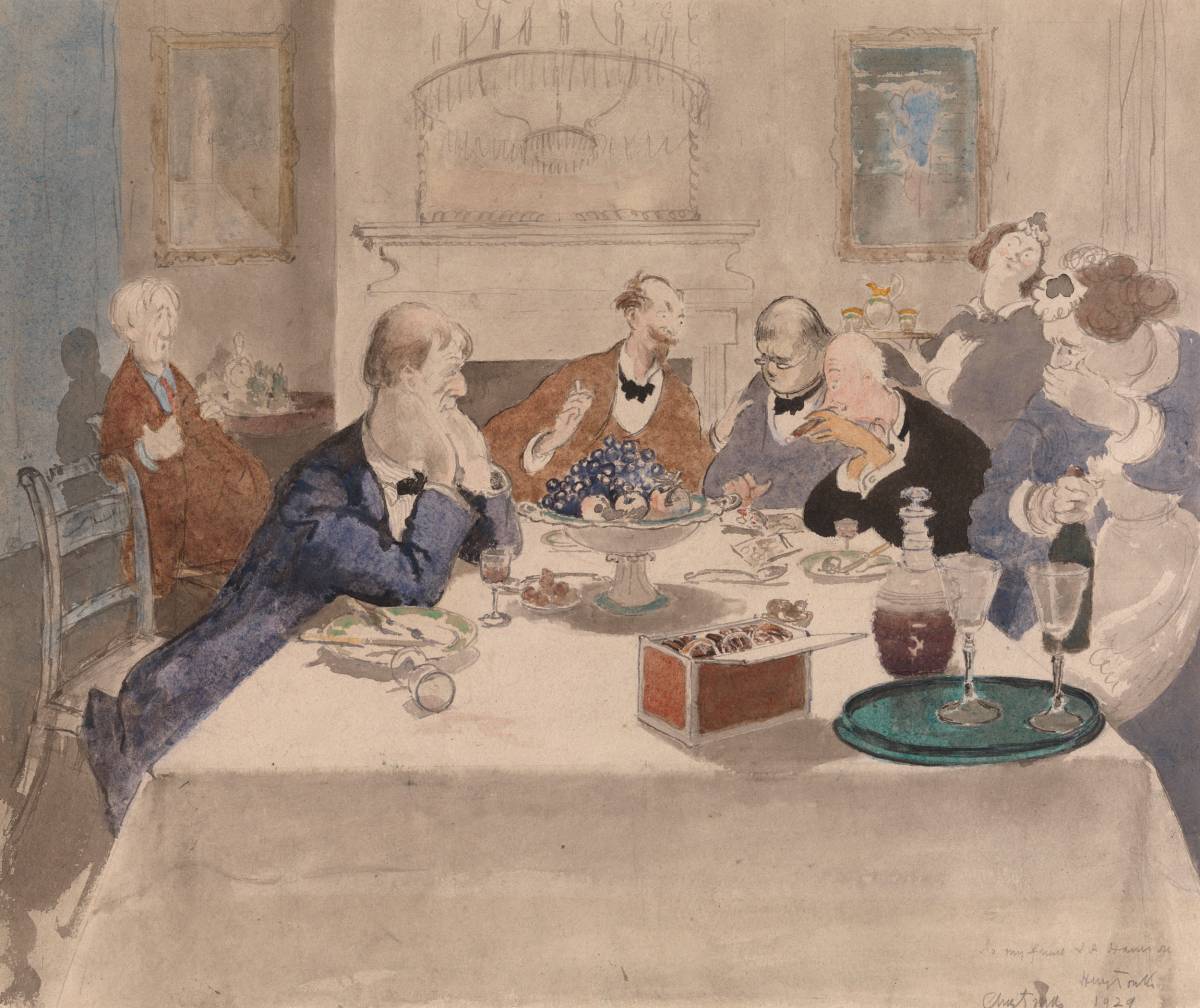 Henry Tonks’s name is intimately bound up with the Slade (where he taught for thirty-eight years). He initially studied medicine and regarded painting as a hobby to be indulged in his spare time, however, he began to become increasingly interested in painting and in 1888 he devoted his spare time to studying at Westminster Art School. Shortly afterwards he gave up medicine to embark on a career as a professional artist. He first exhibited at the New English Art Club in 1891 and the following year he was appointed assistant Professor at the Slade under his previous tutor Fred Brown. In 1918 he was appointed Slade Professor, a post he held until he retired in 1930. Tonks was consequently hugely influential on two generations of artists who studied at the Slade.

Tonks produced a series of satirical or humorous drawings and watercolours such as the present watercolour, for his own amusement and for that of close friends. During the First World War Tonks and D.S. MacColl (Keeper of the Tate Gallery from 1906-11) produced a group of informal and highly satirical cartoons, condemning the politics of war, although, in spite of these views Tonks was still appointed an Official War Artist in 1918.

Tonks was a gregarious and hugely sociable figure who had a large network of influential friends. The figures recorded in the present watercolour are (from left to right) George Moore, Henry Tonks, Laurence Harrison, Philip Wilson Steer and Nelson Ward. These men as well as Sickert, John Sargent and his sisters and William Rothenstein met frequently to have dinner and to debate life, art and politics. One of his later dinners was described by St. John Hutchinson in Tonks’s obituary in The Times:

'A sole, a small saddle of mutton, little white grapes, or Cox’s orange pippins; his wine was his great joy; abstemious himself, when his friends came a bottle of La Fitte 1870 would be produced. The bottle had been opened at the right moment, decanted, and his housekeeper, who was the great stay and support of his life, would sip a small glass, and pass her judgement on it. While the great wine was being drunk, he would discourse on it with relish and wisdom. For many years when he sold a picture, part of the proceeds would be invested at Berry’s not for his own use, but for that of his friends. He had a belief that if you gave a gift it must be something you would wish to keep yourself; to this difficult precept he was always faithful.'[1]

Tonks, Steer and Moore were particularly close throughout their lives; confirmed bachelors they would meet at least once a week, often at Moore’s house. They all lived near each other; Moore was in Ebury Street, whilst Steer and Tonks were in Chelsea. In 1924, Moore published his recollections of several of these meetings as Conversations in Ebury Street.

Nelson Ward was Tonks’s lawyer and he apparently took great pleasure in saying ‘disrespectful things to [Tonks] at dinner in order to have the pleasure of watching his housekeeper’s face and her side looks at him’.[2] Tonks must have known this for it is surely one such incident that he has recorded in the present work, a version of which was owned by Ward.[3]

Lawrence Harrison, the first owner of this drawing, was also an artist and a fellow member of the New English Art Club. His brother Leonard became an important patron of Tonks and first began collecting his work in 1908. The brothers used to invite Tonks fishing at their house on the River Avon. Harrison lent this work to the important retrospective of Tonks’s work held at the Tate Gallery in the autumn of 1936 shortly before the artist’s death.