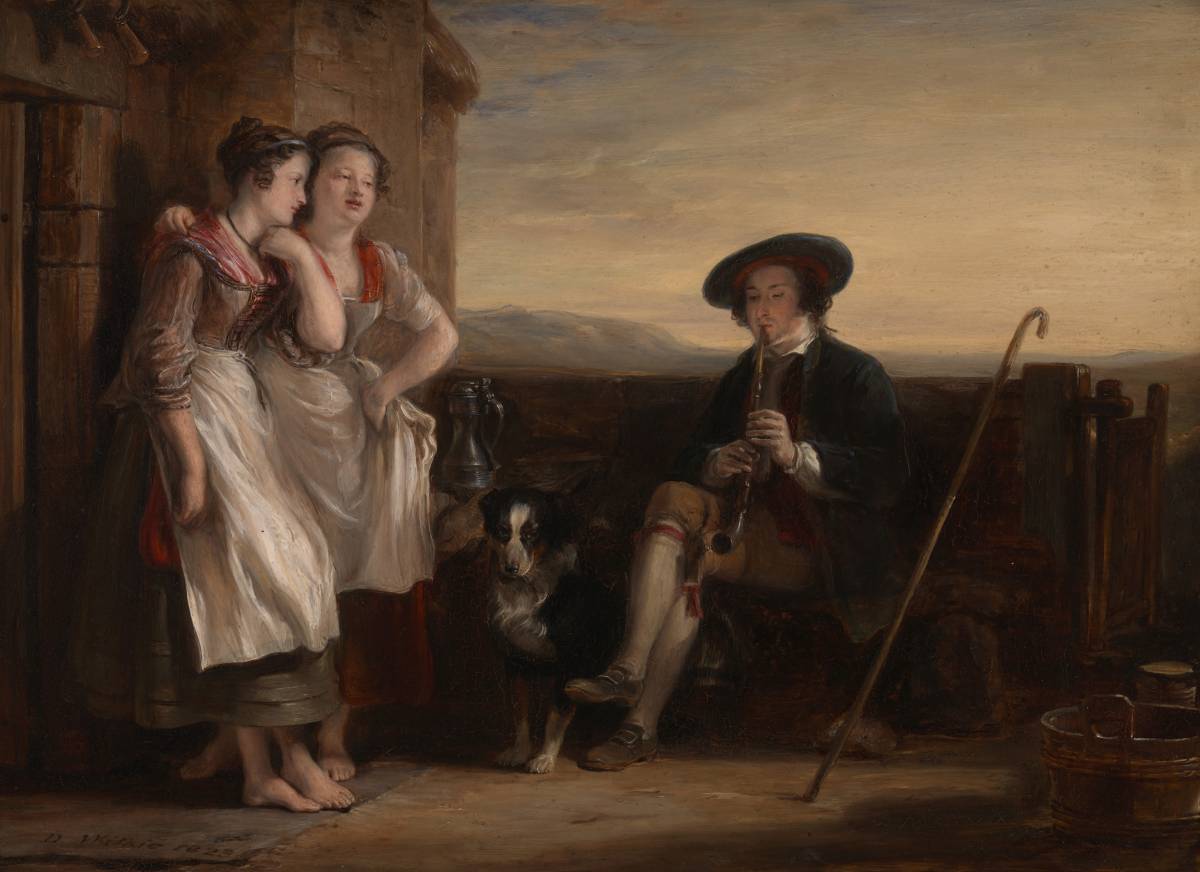 This panel was painted by David Wilkie when he was at the height of his powers. Commissioned in 1823 by the retired diplomat Sir Robert Liston, the painting depicts a scene from Allan Ramsay’s pastoral verse comedy The Gentle Shepherd. Immensely popular in Wilkie’s own life-time, the painting was exhibited regularly throughout the nineteenth century and engraved on four separate occasions. Preserved in spectacular condition, this intensely worked, tender painting is one of the great achievements of Wilkie’s mature career.

Wilkie was born at Cults, in Fife, on 18 November 1785, the third son of the Reverend David Wilkie, the village minister, and his third wife, Isabella Lister. He was educated at local schools in Pitlessie, Kettle and Cupar until the age of fourteen. Ambitious to become a painter, he was sent in 1799 to the Trustees’ Academy in Edinburgh, where he studied at the separate Drawing Academy newly founded by the history painter John Graham; among his fellow students were Sir William Allan and John Burnet, later the successful engraver of his works. He sold his first genre scene, Pitlessie Fair, a portrait of a village teeming with incident, for twenty-five pounds, and after a few months he moved in 1805 to London, where he entered the Royal Academy Schools and attended Charles Bell’s lectures on anatomy. Wilkie achieved an immediate public and critical success in 1806 with his first exhibit at the Royal Academy, The Village Politicians. A painting designed to perfectly capture the metropolitan imagination and executed in a style that reflected the contemporary taste for highly finished Dutch cabinet pictures, the painting catapulted Wilkie to prominence.[2]

Wilkie was elected an Associate of the Royal Academy in 1809 and became a full Academician in 1811. He rapidly achieved considerable commercial success, in 1815 his Distraining for Rent was acquired by the British Institution for 600 guineas. In 1822 Wilkie exhibited The Chelsea Pensioners Receiving the Gazette Extraordinary of Thursday June 22nd, 1815, Announcing the Battle of Waterloo!!! which had been commissioned by the Duke of Wellington for the substantial sum of 1,200 guineas. The painting caused a sensation at the Royal Academy, where a barrier had to be erected to protect it from the crush of people who came to see it. That painting was admired by amongst others Théodore Géricault, who saw the unfinished painting in Wilkie’s studio and Eugène Delacroix who visited the Academy with Richard Parkes Bonington.[3] Géricault wrote of how useful it would be for French artists to see Wilkie’s work. He wrote to Horace Vernet about his visit to Wilkie’s studio where he saw both the unfinished Waterloo Dispatch and the smaller Newsmongers, noting:

‘he has varied all these characters with much feeling. I shall mention to you only the one figure that seemed the most perfect to me, and whose pose and expression bring tears to the eye, however one might resist. It is the wife of a soldier who, thinking only of her husband, scans the list of the dead with an unquiet, haggard eye…Your imagination will tell you what her distraught face expresses.’[4]

In the wake of the success of The Waterloo Dispatch, Wilkie painted this small, intimate panel depicting an episode from Allan Ramsay’s The Gentle Shepherd. Wilkie had known Allan Ramsay’s poem since his youth; he owned a copy of the 1788 edition which had been illustrated by David Allan and contained the music for O’er Bogie. Wilkie executed an early drawing inspired by it and painted another scene from the poem, The Cottage Toilet, now in the Wallace Collection, London. In the present panel Wilkie illustrates a scene described in the opening stanzas of Ramsay’s poem. Patie, the eponymous Gentle Shepherd, and Roger, another shepherd, are found together. They are respectively in love with the cousins Peggy and Jenny. Roger confesses his dejection at having been spurned by Jenny, and speaks of a meeting between them:

When I begin to tune my stock and horn,
With a’ her face she shaws a cauldrise scorn.
Last night I play’s; ye never heard sic spite;
O’er Bogie was the spring, and her delyte;
Yet tauntingly she at her cousin speer’d,
Gif she could tell what tune I played, and sneer’d

Wilkie depicts Roger seated playing O’er Bogie on his stock-and-horn, a traditional Scottish reed instrument. Jenny, Roger’s love, is depicted to the left regarding him skeptically, with her arm over the shoulder of her cousin Peggy, who is shown standing in profile. Between Roger and the standing women, Wilkie has placed Roger’s dog, a border collie.

By 1820 Wilkie’s name was identified with anecdotal rustic genre scenes such as this. The great patron, Sir George Beaumont wrote to Wilkie in 1812 that: ‘you can never improve upon the simplicity of your first intentions.’[5] These paintings of ‘the peculiarities of familiar life’ influenced by Scottish rustic poetry, the popularity of David Allan’s genre scenes, and Wilkie’s knowledge of Dutch and Flemish art were characterized by an obsessively laborious preparation. Miniature lay figures, large finished drawings, and oil sketches were used to establish groupings and lighting. ‘He then walks about,’ John Constable told the diarist Joseph Farington in 1807 ‘looking for a person proper to be a model for completing each character in His picture, & He paints everything from the life.’[6] This method is apparent in The Gentle Shepherd: the individual characterisation of the three figures, not to mention the exquisitely rendered portrait of Roger’s dog, all point to Wilkie’s obsessive observation of figures from life. Wilkie’s method produces some unexpectedly beautiful passages, such as the interlocked feet of the standing women. As Géricault observed, Wilkie perfectly captures the quiet emotion of each figure: Roger, with his stock-and-horn playing his beloved’s favorite tune, Jenny, by contrast is shown with ‘a cauldrise scorn’, mocking Roger. Wilkie has animated the simple scene with a series of meticulous domestic details, a pair of scythes hang above a door to the left, a shepherd’s crook leans against the cottage wall and the distant landscape suggests a romantic Highland setting. The finished painting demonstrates Wilkie’s developing sophistication in the lucidity and focus of his narrative and design, coupled with great emotional range.

The painting was a commission from his kinsman, the successful retired diplomat Sir Robert Liston, at the moment that Wilkie was working on The Waterloo Dispatch. Wilkie wrote to Liston’s wife on 4 December 1821: ‘The picture Sir Robert has been so obliging as to request me to paint for him I still keep in mind. There are some little subjects by me that might be taken up for this purpose. Of these one from the Gentle Shepherd of Allan Ramsay you might perhaps like, but this we can discuss.’[7]

He took a further two years to deliver the painting. Wilkie had painted Liston himself a decade earlier in a portrait now in the National Galleries of Scotland. Liston had served as a career diplomat, perhaps most influentially in North America. In February 1796 Liston had been appointed British minister to the United States, only thirteen years after the ending of hostilities. Through his actions, the British government agreed that Britain would not intervene in west or south-west America. He acted skillfully as an intermediary between the Canadian and American governments in a dispute over the upper Mississippi valley, and did much to encourage the informal system whereby Royal Navy ships convoyed American merchantmen. He remained at Philadelphia until December 1800 when he and his wife sat for portraits by Gilbert Stuart, now in the National Gallery of Art, Washington.

Wilkie’s The Gentle Shepherd proved enormously popular. It was engraved on a number of occasions, impressions making their way to America where it was copied by Thomas Sully. Wilkie himself produced at least two studio variants of the composition. The present panel was exhibited at the Royal Institution in Edinburgh in 1824 and at the British Institution shortly after Wilkie’s death in 1842 and again at the Manchester Art Treasures Exhibition in 1857. The great Scottish novelist, poet and essayist James Hogg wrote an account of the painting in 1829, in which he echoes Géricault’s words of 1821. After stating that the picture as probably regarded as a ‘trifle’ by the artist, he observed:

‘if nature’s first impressions are to be in aught believed it is a gem of the first water. I got only one slight look of it but I saw nature so beautifully depicted that in spite of all I could do the tears burst from my eyes and the impression made by it is as powerful at this moment as it was then. It is a scene from Allan Ramsay’s gentle shepherd in which the lover is exerting all his power to play his sweetheart’s favourite tune with proper effect while she is leaning on her cousin and asking her ‘if she has any guess what tune that is which the poor fellow is trying?’ I never saw any thing equal to it! There is a cast of disdain in every muscle of Jenny’s lovely rural form from the toe to the eyebrow which is indescribable. And the best of it all is the looker at the picture perceives at once that it is an affected disdain, but neither the lover, nor Peggy, nor the colley discover aught of this but are all deploring her perversity by looks the most characteristic. The looks of disappointed affection in the dog are exquisite. I have often wondered what became of that little picture, or how it was estimated, for there was never any thing of the kind made such an impression on me.’[8]