This grand and impressive watercolour of Lake Lucerne was made towards the end of Turner’s career, the rich, shimmering washes capture the limpid light and atmosphere of the Alps at sunset.

The view is one of Turner’s most iconic, taken to the south-east of Lucerne across the lake to the familiar profile of the Rigi mountain, it is a view most famously depicted in The Blue Rigi now in Tate Britain, London. The views of Switzerland that Turner created in the 1840s, when he was in his late sixties, have long been admired as the culmination of a lifetime of innovative achievement as a watercolour artist. Turner himself recognised that the Swiss lakes and mountains had stimulated something exceptional from him, and he consequently valued these watercolours among his most highly-priced works on paper. This important watercolour was probably made by Turner on his 1842 trip to Switzerland, it belonged in the nineteenth century to his friend, the Revd William Kingsley.

Though the Rigi rises only to 1,797 meters, a modest height when compared to numerous more challenging Alpine peaks, its proximity to Lucerne, and the steady incline of its slopes, ensured that it became one of the most popular climbing targets for the first generation of tourists in the mid-nineteenth century. The view from the summit was considered among the finest in Switzerland, especially at sunset or sunrise, when the spectacular effect was frequently augmented by the drone of an alpine horn.

Turner had first seen and sketched the saddle-like wedge of the Rigi during his rushed tour of the Alps in 1802. But it was only during his annual summer tours between 1841 and 1844 that the mountain became a motif he invested with potent and poetic resonances. Early in 1842, after the first of these visits, he embarked on a set of ten watercolours, each of which had been commissioned as a more developed (or 'finished') version of the preliminary colour sketches he had made during his travels. This was an unconventional way of working that appears to have both bewildered and enthralled the group of collectors who were invited to make the selection of subjects. In addition to views of Lake Constance, the Splügen Pass and Zurich, most of the first series of these watercolours depicted Lake Lucerne, of which three focused on the Rigi, each of which is now referred to by its defining colour or tonal effect. Turner intended two of them to act as contrary states: one shows the mountain lit by a cool blue light at sunrise (The Blue Rigi, now at Tate Britain); and it is contrasted by the hazy warmth at the end of the day, which illuminates the Rigi with a red glow (The Red Rigi, now at the National Gallery of Victoria, Melbourne). The success of the pair resulted in a request for another version of the morning effect, known as The Dark Rigi now in a Private Collection. 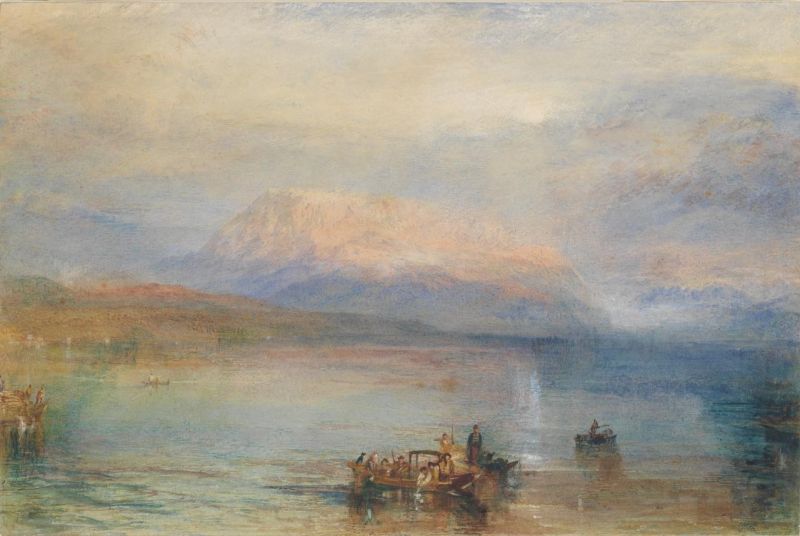 The viewpoint in Turner's watercolours of the Rigi is one he could enjoy from the windows of an inn he habitually chose during his stays in Lucerne between 1841 and 1844. Recommended in many early guidebooks, 'L'Hôtel du Cygne' (the Swan Hotel) was right on the waterfront, and would have enabled Turner to study the mountain as its appearance was modified by the changes of light in the course of the day. From the hotel he could also witness, in comfort, more dramatic atmospheric effects, such as the rainstorm he shows in some of his colour studies. This enduring obsession with the Rigi can be charted in a stunning array of watercolours, the majority of which are in the Turner Bequest at Tate Britain. This distinctive fascination with the nuances of perception as they can be discerned in the contemplation of a specific motif anticipates the later preoccupations of Claude Monet, in his various canvases devoted to haystacks or to Rouen cathedral, or of Paul Cézanne, in his repeated renderings of the flanks of Montagne Sainte Victoire in Provence.

Some of Turner's most daring and economic variations on the motif of the Rigi were painted in 1844 in a soft-bound jotter simply designated the 'Lucerne' sketchbook (Turner Bequest CCCXLV; Tate Britain). But he also worked on separate sheets of paper that year as he toured the lakes of central Switzerland. This watercolour can be related to some of these, and particularly to another view of Lake Lucerne formerly in the collection of Jan Krugier.

In the present watercolour Turner has depicted the end of the Höfbrucke, the longest of Lucerne’s medieval bridges, which had been cruelly abbreviated to create the quay on which the L'Hôtel du Cygne and associated landing stages were built. In distinction to most of the watercolours Turner made of this view, he has shown the wharfs busy with activity. A herdsman with his cattle is discernible patiently waiting, possibly to be ferried to summer pastures across the lake, whilst the presence of wagons and covered barges points to the commercial life of Lucerne and implicitly the creep of modernity into the Alpine landscape.

The drawing is first recorded in the collection William Kinsley, Rector of South Kilverton, Thirsk, and a Fellow of Sydney Sussex College, Cambridge. Kingsley was a friend of both Turner and Ruskin, having met the latter at Cambridge.[1] Kingsley befriended Turner and is the source for a number of important anecdotes and biographical details, including the story he reported to Ruskin, of Turner having tied himself to the mast of a ship in a storm. He knew the ageing artist well enough to be able to report on his difficulties with ill-fitting false teeth and his recourse to alcohol.  Kingsley formed an important collection of Turner’s works, owning amongst other drawings the Distant View of Lowther Castle now at the Ashmolean Museum, Oxford and Prudhoe Castle now in the British Museum, London.