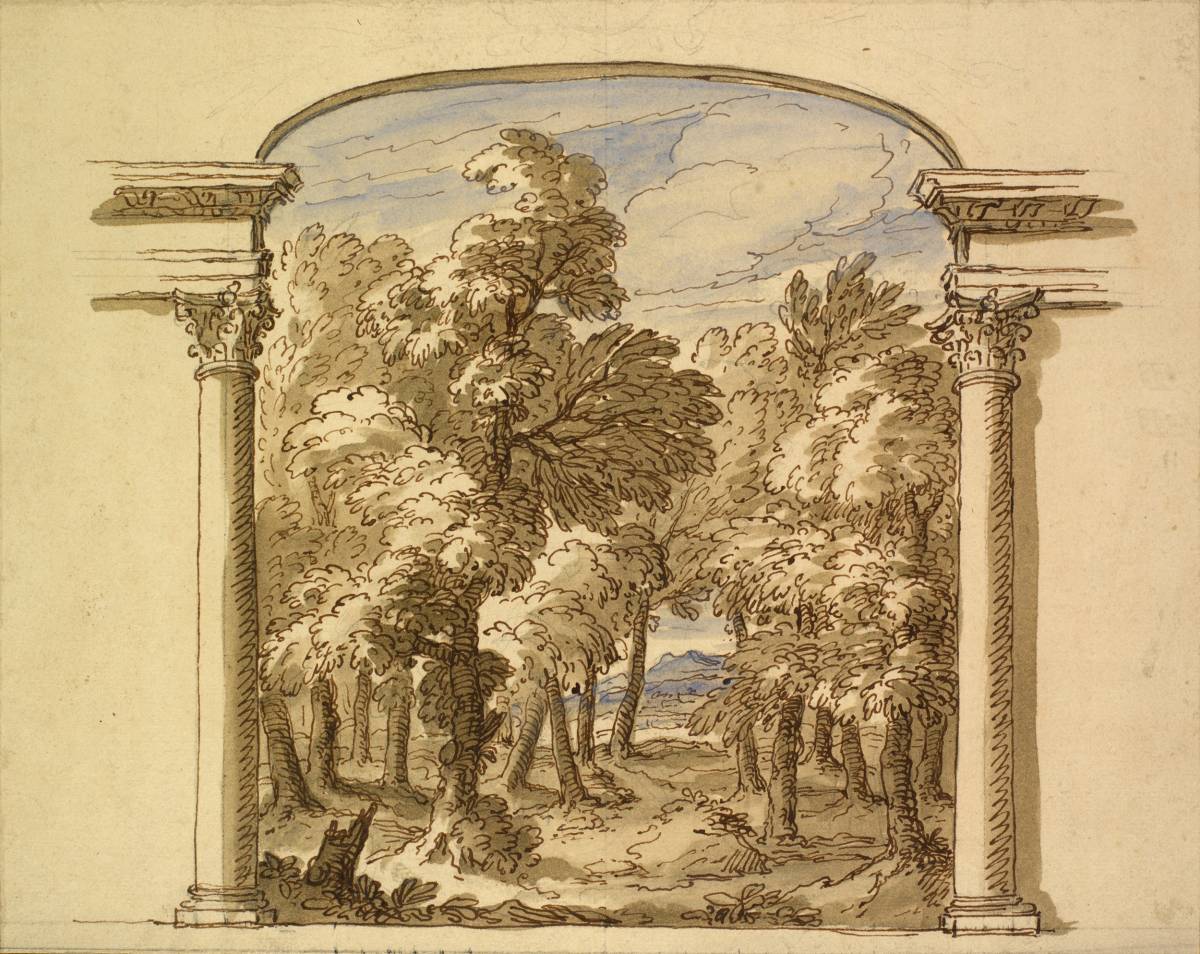 It has been proposed that this drawing is a design for the forestage of the Queen's Theatre on Haymarket, which opened in 1705 with a production of the pastoral opera The Loves of Ergasto. Sir John Vanbrugh designed the building, which was altered in 1708-9 and finally destroyed by fire in 1789. Thornhill's involvement with stage design at this early point in his career is established through four landscape sketches at the Victoria and Albert Museum, whose inscriptions show that they were produced for the 1705 production of the opera Arsinoe at the Theatre Royal, Drury Lane.[1]

Graham Barlow identified the present drawing in a 1989 article in which he reconstructed Vanbrugh's design for the Haymarket theatre, based on what was already known of the building from plans published in the later eighteenth century and on four more of Thornhill's drawings, whose connection to the theatre had not been recognised.[2] Barlow identified a sheet in Thornhill's British Museum sketchbook as an outline elevation of the stage, whose measurements showed that it belonged in a building that was fifty-four feet and eight inches wide, which were the dimensions of Vanbrugh's theatre.[3] The same measurements were also inscribed on the back of Thornhill's ceiling design at the Huntington Library on the theme of Queen Anne's Patronage of the Arts, which also contained three blank circular holes through which three chandeliers were to be hung.[4] The two remaining drawings – the present landscape watercolour and a sketch now at the Art Institute of Chicago which is inscribed 'The 1st Great flat scene' - were clearly scenery designs.[5] Barlow suggested the present sheet be entitled 'The Pastoral Scene' in an allusion to the theatre's inaugural production. If so, it would have been painted on a huge scale, as in real life the columns in the watercolour would have been twenty-foot-tall and two foot in diameter, and topped with three feet high gilded capitals that supported a five foot high cornice.

Thornhill painted landscapes in domestic settings too, and there are many landscape sketches in the British Museum sketchbook. For example, Thornhill decorated the closet and dairy of Mr Loader at Deptford, whom Croft-Murray identified as 'anchorsmith’ to King William and Queen Mary.[6] In 1710 Thomas Cary commissioned Thomas Archer to build him a house in Roehampton, Surrey and in about 1712 Thornhill was asked to decorate the main Saloon, for which he devised a composition of the Feast of the gods for the ceiling and a series of landscapes set within architectural frameworks around the walls. The house still stands, but Thornhill’s work was destroyed in 1940. The present watercolour, although more fully worked, is similar in style and subject matter to the studies for Mr Loader and at Roehampton. 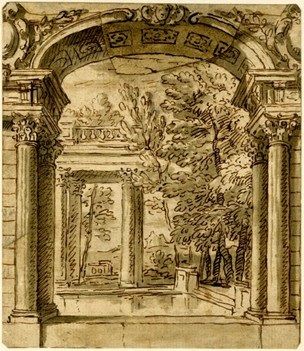 This watercolour supports the idea that a taste for pastoral classical landscapes flourished in the early eighteenth century. Histories of British landscape painting have typically traced the origins of the genre to topographical or chorographical representations of real scenery and suggest that taste for ideal classical landscape in the style of Gaspar Dughet emerged only around the middle of the eighteenth century as the influence of the Grand Tour grew. In fact, this design and others confirm that a taste for Italianate landscape formed much earlier and suggest that the role of decorative painting in the history of the emergence of classical landscape in England has been overlooked. 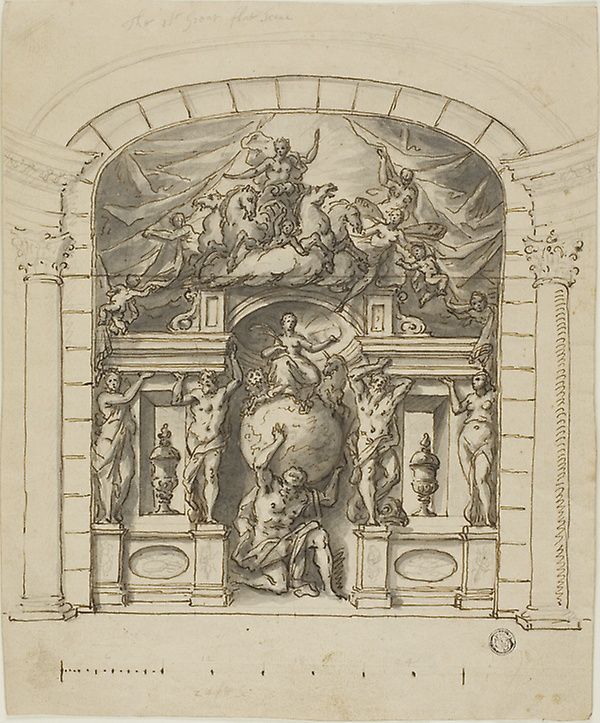