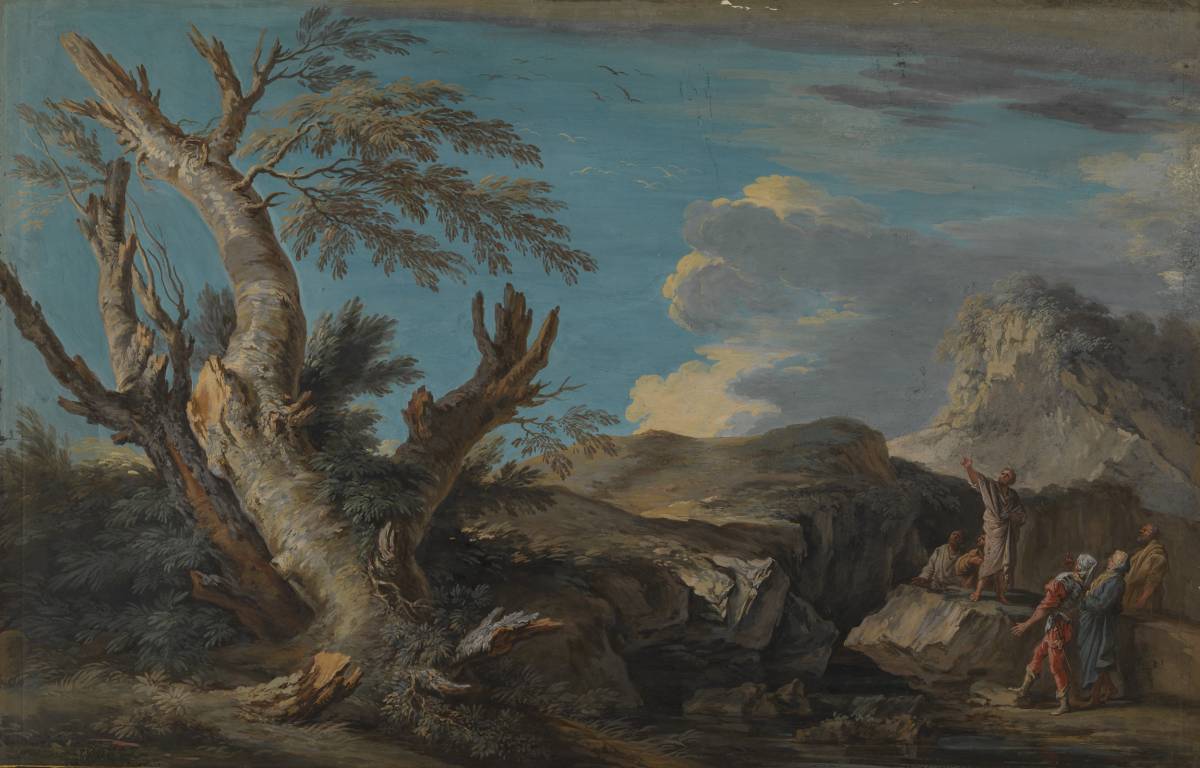 Writing in 1755 in his Present State of the Arts in England, Jean-André Rouquet devoted a whole section to ‘Painting in Water-Colours’ in which he praised the work of Joseph Goupy, who he claimed:

‘copies in the most perfect manner, in water colours, the drawings of the most eminent masters; he knows how to accommodate his pencil to their different manners of designing and painting. He executes this branch, which in appearance is merely servile, with a skilful freedom, by which his copies preserve the spirit of the originals.’[1]

This impressive gouache by Goupy was made after a painting by Salvator Rosa and it neatly demonstrates his ability at preserving ‘the spirit of the original’. This painting offers valuable evidence of both the demand for miniature copies of old master paintings in early eighteenth-century London and the market for reproductive prints. We know a remarkable amount about the circumstances surrounding Goupy’s execution of copies after Salvator Rosa, thanks to a court case he was embroiled in with the brother of his most important and consistent patron, John Hedges.[2]

Goupy was born into a family of French artists, probably in London, in 1689, Goupy is said by George Vertue to have studied under his uncle Louis Goupy. In Goupy’s own account, written for the 1738 court case, he states that he travelled to Rome to improve himself ‘for near seven years together.’ He had returned to London by 1711, when he is recorded as one of the subscribers to the Great Queen Street Academy. Shortly after his return from the Continent Goupy became a fashionable drawing master, teaching the daughters of Frederick, Prince of Wales. Goupy established himself as a leading practitioner in producing miniaturised copies of old masters in gouache. In 1717 Goupy completed copies of the seven Raphael Tapestry cartoons for the Hanoverian minister Baron Kilmansegge, for which he was paid 200 guineas. Following his death, later the same year, Kilmansegge’s widow sold the copies- of which the Death of Ananias is now in the Center for British Art at Yale- to the Duke of Chandos for 50 guineas each.[3] This was a considerable sum and substantiates Goupy’s claim in 1738 that he was earning with ‘the greatest ease £600 per annum and upwards.’[4]

Reduced copies of celebrated paintings occupied a privileged position in the burgeoning art market of early eighteenth-century London and Goupy’s success should be read as the coalescence of several factors. Miniature copies of old master paintings had been popular in Britain since the seventeenth century when Peter Oliver had both produced reduced versions of paintings in the collection of Charles I. Goupy’s choice of medium, gouache - watercolour mixed with white pigment to render it opaque - had been made fashionable by Marco Ricci, who worked in Britain from 1711. Cabinets of miniatures continued to be a feature of English interiors until the middle of the eighteenth century; on a visit to Leicester House in 1749, Vertue records some 13 reduced copies by Goupy decorating Princess Augusta’s dressing room.

The present work relates to a series of six prints Goupy made after paintings by Salvator Rosa which he published in 1724. Vertue observed that the prints were ‘Etch’d…from several rare original pictures of Salvator Rosa in the Collections of the Curious.’ The ‘curious’ represented some of the most familiar and influential connoisseurs in early eighteenth century London, including William, 2nd Duke of Devonshire, the diplomat and collector Sir Paul Methuen and Jonathan Richardson. The Augures belonged to Thomas Coke, Queen Anne’s vice-chamberlain, although it can now no longer be traced. The project probably dates from 1717. During the 1738 court case it was claimed that Hedges: ‘bespoke four pictures to be copied by [the] defendant [ie. Goupy] from landscapes by Salvator Rosa for which he agreed to pay…20 guineas.’ Later in the proceedings three of the landscapes are named as the ‘Augures’, ‘Tobit and the Angel’ and ‘The Robbers.’[5] Hedges’ pictures formed the basis for Goupy’s etchings, which show the original compositions reversed. The fact that the verso of this work is blackened gives direct physical evidence it was used as the model for the etching, the chalk enabling Goupy to transfer the design directly to the surface of the plate. Goupy also used the present work as the basis for a number of copies, a gouache of the same subject-matter is preserved in the British Museum, which differs considerably in scale - being smaller and squarer than Goupy’s etching- and in the disposition of the figures.

Goupy’s etchings were the first set of landscape prints produced after an Italian seicento artist in Britain, they therefore represent a major contribution to the evolution of landscape painting in Britain. 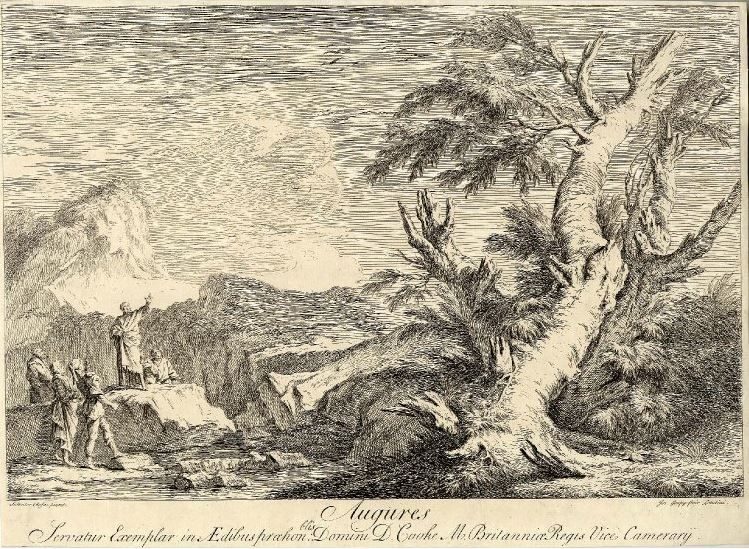