One of the immediate impacts of the Restoration of the monarchy in 1660 was an influx of tourists from the Continent, although travel had by no means been forbidden during the interregnum, the prospect of patronage from Charles II and his new court prompted the arrival of a number of painters in London during the 1660s. One such visitor was the Dutch artist Michel van Overbeek who made  pen and ink studies of his journey from Dover to London and in the environs of the city. This sheet depicts a view of St James’s Park offering a rare glimpse of the park shortly before the campaigns of formal planting would transform it from a Tudor hunting ground into a public pleasure garden.

Michel van Overbeek was a Dutch painter and picture dealer, the nephew of the topographical draughtsman Bonaventure van Overbeek. Overbeek senior was born and died in Amsterdam, but was most celebrated for his publication of Roman ruins, Les restes de l'ancienne Rome, which was completed in 1709. Dedicated to Queen Anne the book was, according to Arnold Houbraken, published posthumously by Michel van Overbeek.[1] Like his uncle, Michel seems to have travelled extensively in France and Italy and made what appears to be a brief stay in England from about 1663 until 1666. Both Christopher White and Celina Fox have concluded that he was in London by 1663 as a distant view from Greenwich (Royal collection, Windsor Castle) shows the tower of Old St Paul’s covered with scaffolding which was in place from August 1663 until the church was destroyed by fire on 4 September 1666. 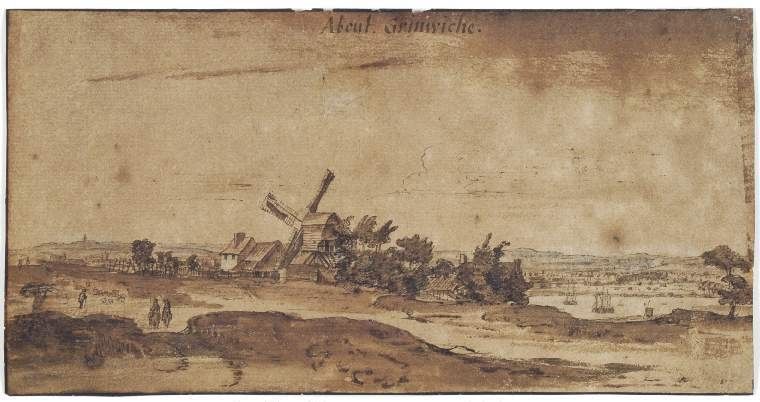 The work from Overbeek’s English tour accords with the contemporary convention of topographical travel views, such as those prepared by the Bohemian etcher, Wenceslaus Hollar in the 1640s.[2] The oblong, ink drawings are all the same size and probably come from a single sketchbook, they are all prominently titled, suggesting Overbeek had some kind of publication in mind. It would seem, from the internal evidence of the extant British drawings that he landed at Dover, probably from France, and travelled up to London. Amongst the five English views by Overbeek in The Fitzwilliam Museum, Cambridge, is a drawing of Dover Castle as well as a view on the Medway. Once in London, he completed several conventional views of the city and its environs, including a fine drawing of the Palace of Westminster from the Thames now in the British Museum, a prospect entitled ‘About Grinwiche’ (Fitzwilliam Museum) and two further views of Westminster (Westminster Public Library). Overbeek seems to have traveled to St Albans, a view of which survives in the British Library, as well as a view of Kingston showing the Copper-mills at Kingston (Yale Center for British Art, New Haven), however the largest concentration of his English drawings are of London’s parks. 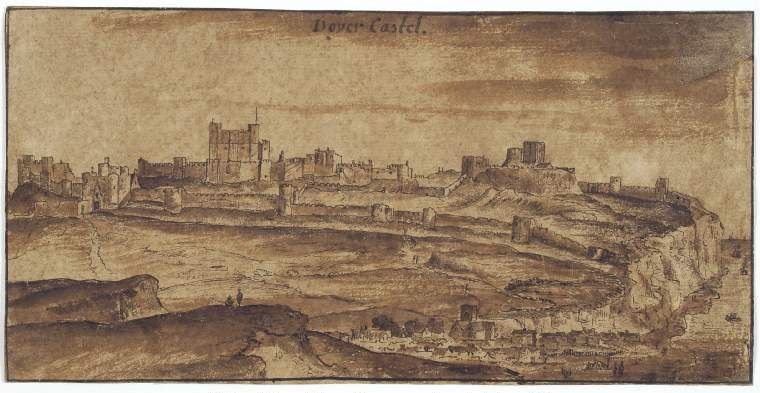 Overbeek’s focus on the parks to the west of London perhaps reflects the reorientation in the life of the nation following the Commonwealth, away from Parliament and the City, back to the King, aristocracy and court, who were based at St James’s Palace. Recreation became a conspicuous element of metropolitan life, and London’s parks were used not only for relaxation but, as documents such as the diary of Samuel Pepys reveal, forums for political lobbying and intrigue.

St James’s Park had been acquired from Eton College by Henry VIII in 1532; initially an area of marshland, traversed by the Tyburn, it lay to the west of York Palace, which had belonged to Cardinal Wolsey. James I had the land drained at the beginning of the seventeenth century and turned into a park where he kept exotic animals. Overbeek’s view of the park, inscribed St Iaems Park, show the park following its restitution to the Crown, but before it was transformed by Charles II with more formal planting by the French landscaper André Mollet. This included the creation of the large canal and avenues of trees, the most famous being designed for the King’s favourite courtly game, a kind of boules-cum-croquet named pell mell. Following these alterations, St James’s Park became indelibly associated with two conflicting sides of Restoration culture, represented by two great poetic works. The first, Edmund Wallers Poem on St. James’s Park as Lately Improved by His Majesty of 1661 which depicted the park as a cultivated idyll and location of genteel courtship. The second, John Wilmot, 2nd Earl of Rochester’s A Ramble in St James’s Park of about 1673, exposed the park’s status as a locus for imagined and actual sexual congress.