This small, precisely made drawing is an important early depiction of the British Museum. Made by Samuel Wale in 1761 as an illustration for Robert and James Dodsley's London and its environs described, this drawing was published to accompany the first comprehensive account of the museum, which had only been founded in 1753. Samuel Wale was one of the most versatile and prolific draughtsmen working for the London book trade in the mid-eighteenth century. Wale produced designs for more than 100 publications. Unlike many of his contemporaries, he chose not to engrave his own designs, preferring to pass them on to engravers such as James Green who engraved the present drawing for Dodsley's publication.

These drawings follow a format adopted in a number of plates in Dodsley's London and its Environs, showing a notable building from two views. In this case Montagu House is shown from Russell Street on the top and from the gardens of the house on the bottom, with the distinctive tower of St George's, Bloomsbury visible in the background. As Dodsley's text describes, the British Museum trustees having acquired the collection of Sir Hans Sloane, the Cottonian library and the Harleian manuscripts: 'it happened very fortunately soon after, whilst the Trustees were at a loss where to purchase or build a proper repository, an offer was made them of Montague House in Great Russell Street, Bloomsbury, a large and magnificent building, finely ornamented with paintings, situated in the most convenient part of the whole town, and having an extensive garden of near eight acres. This they purchased for the sum of £10,000. Repairs, alterations, book-cases, cabinets, and all other conveniences for placing the whole collection properly, and the making apartments for the officers, have cost £15,000. more. And every part is now so excellently contrived for holding this noble collection, and the disposition of it in the several rooms is so orderly and well designed, that the British Museum may justly be esteemed an honour and ornament to this nation.' 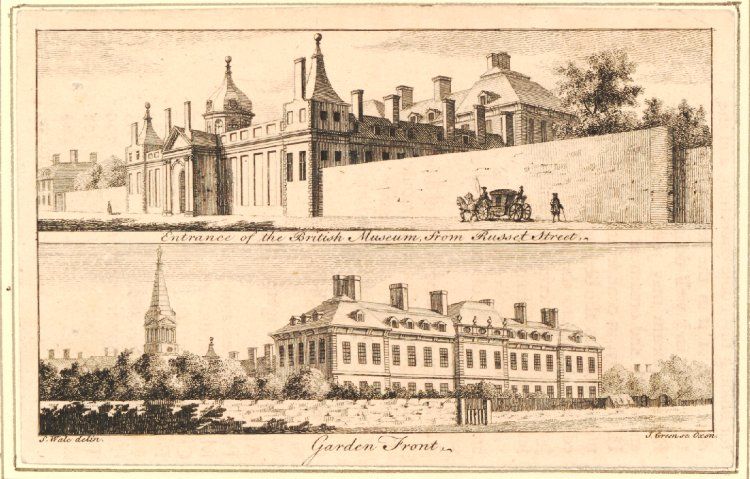