This large, squared-up drawing was made by Samuel Buck in preparation for an engraving of The North Prospect of Gravesend which he published with his brother, Nathaniel, in 1739. By this date the Buck brothers were celebrated and successful engravers and publishers. From 1735 they operated from number 1 Garden Court, Middle Temple, with a second address at the Green Canister, by the Crown and Anchor Tavern, opposite St Clement Danes in the Strand. The Bucks had two ambitious projects in progress, a series of 24 perspective views of ruins in Yorkshire and a second series of town prospects. The present, grand sheet was made in preparation for a print in the second series.

In the Bucks’ series of townscapes, each prospect consisted of an image on a single sheet measuring 305 mm × 775 mm. They habitually took the views from the nearby countryside, 1 mile or 2 miles from the town, and from an elevated spot where possible. In the case of Gravesend, which lies seven miles to the north-west of Rochester, on the south bank of the River Thames, Buck took the view from an elevated position above Tilbury Fort from the north bank of the river. The view therefore shows the northern prospect of the town along the Thames itself. Gravesend had suffered a devastating fire in 1727 which destroyed not only the fifteenth-century St George’s church, but 110 houses. Reconstruction was largely completed by 1731, the Bucks therefore show the town with its new skyline including newly built tower of St George’s church. In the foreground of the view, the Bucks included the fortifications of Tilbury. The drawing shows how careful the Bucks were to dress their prospects with a suitably fashionable staffage, the elegant figures in the foreground provide an unexpectedly rococo note. These additional figures may well be the work of another hand, as Ralph Hyde has pointed out Gravelot, Claude Chatelain, Peter Monamy and possibly Samuel Scott were all employed to strengthen the Bucks drawings, to draw staffage, and generally to bring their awkward drawings to life. All the town prospects carry a numbered key and most are accompanied by a diligently compiled panegyric. The Bucks' usual practice was to market the town prospects in sets of six, in this case the prospect of Gravesend was accompanied by views of Dover, Sheerness, Woolwich, Greenwich and Deptford all then in Kent.

Sold with an impression of the engraving. 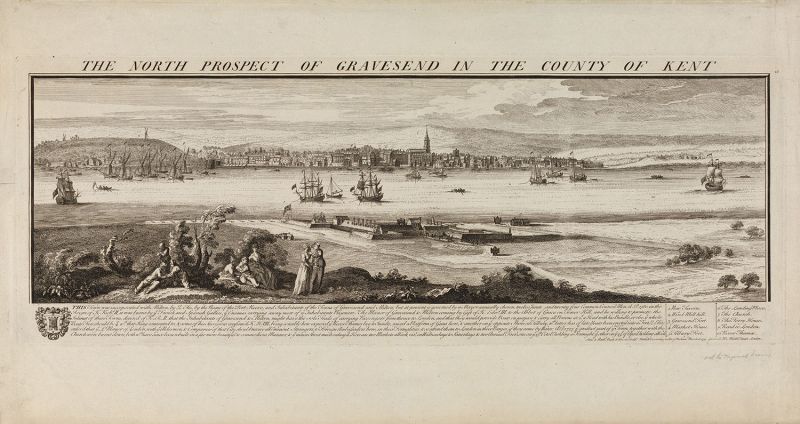