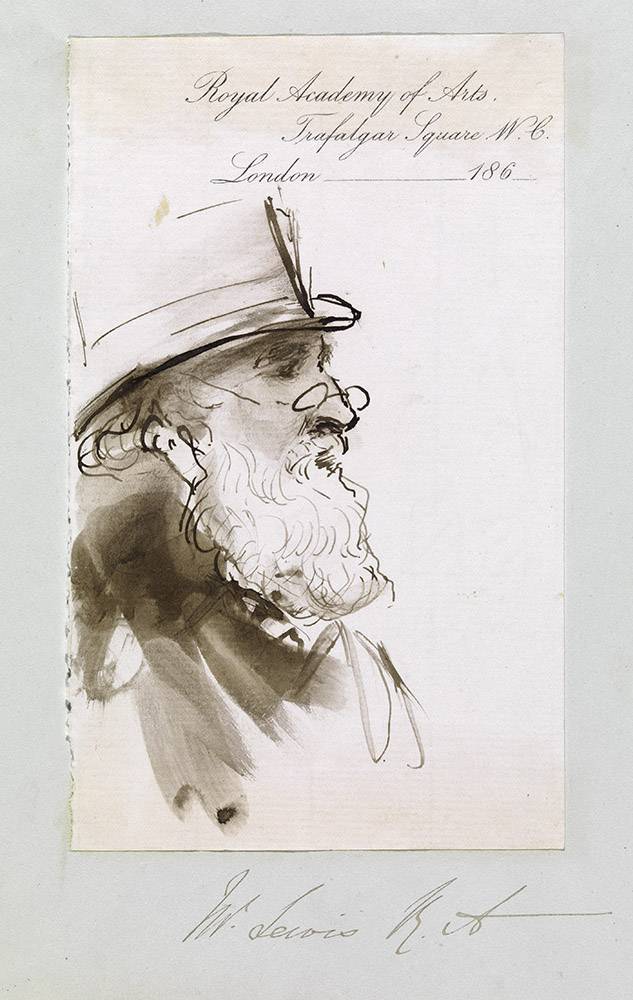 This spirited, informal sketch was made by Francis Grant in the mid-1860s it depicts his fellow Royal Academician, John Frederick Lewis, seen in profile. Made on a piece of Royal Academy stationary, it may well have been a rapid sketch executed during a meeting. In 1866 Grant was elected President of the Royal Academy, he proved himself to be a hugely energetic and effective leader, negotiating the Royal Academy’s 999-year lease on Burlington House, Piccadilly, London for the rate of £1 a year. The Academy moved from the National Gallery in 1869, so this drawing is likely to predate the move as the writing paper bears the Trafalgar Square address. After his early life travelling on the Continent and the Near East, John Frederick Lewis established a flourishing career in London as a painter of Orientalist subjects. Lewis was elected an Academician in 1864, so this drawing is likely to date from shortly after.

At the Royal Academy Lewis proved to be an ineffective teacher: an irritable perfectionist, he was unable to understand his pupils, according to W. R. Spanton, a student in the 1860s. Lewis had no true protégés, although he inevitably exercised a strong influence on any English artist who attempted to depict harems, Bedouin, or bazaars, such as Frederick Goodall. Briony Llewellyn has recently described the ‘two facades’ of Lewis, the respectable Victorian gentleman and the ‘more outré Eastern counterpart.’ In this drawing we see Lewis ‘with dishevelled hear and beard, spectacles on the end of his nose and hat rammed on to his head’ which, she suggests ‘seems to represent Lewis free from any of the guises that he assumed.’