‘His forehead was high with the frontal veins singularly apparent when under the influence of passion or intense thought; his eyes were dark hazel, full and somewhat piercing, his nose rather aquiline… he generally wore a coat of mixed colour, with long square skirts, and breeches of velveteen; these, with two or three waistcoats and a dirty silk handkerchief round his neck, completed his appearance, which was that of a hackney-coachman.’[1]

This previously unpublished and highly refined self-portrait of the young George Morland was made in 1775 when he was 12 years old. Carefully observed in profile, the portrait shows Morland’s characteristic features and messy hair. Morland was a child prodigy who exhibited his first works at the Royal Academy in 1773, he went on to have a successful career as a genre painter, subverting the normal commercial model of artists in the period to have a profitable relationship with dealers and print publishers.  Morland’s unconventional appearance mirrored his unconventional life and in spite of his commercial success he ended up in debt. This incisive and precocious early self-portrait underlines what an intelligent and sensitive draughtsman Morland was.

George Morland’s father was the successful painter and engraver, Henry Robert Morland. Morland senior owned a house at 47 Leicester Fields, London which he sold to Joshua Reynolds in 1760. Morland therefore grew up in an ambitious and well-connected artistic household; a sketch of the young Morland asleep in a chair by his father’s friend Paul Sandby survives in the Royal Collection.[2] This exposure within the artistic establishment undoubtedly led to Morland’s early talent in drawing being promoted. From 1775 Morland became a prolific contributor to London’s exhibiting society showing two sketches ‘in chalks’ at the Free Society in 1775 and six ‘stained drawings’, or watercolours, the following year.

The rediscovery of this self-portrait gives a sense of how accomplished Morland was by the time he began exhibiting at the Free Society. The profile is handled confidently, with a number of noticeable pentiments, for example in the precise outline of the chin. The sophisticated tonal handling of the black chalk suggests Morland’s training with his father, who was a celebrated pastel portraitist by this date. The sensitive characterisation, the features – ‘his eyes were dark hazel, full and somewhat piercing, his nose rather aquiline’ – and the unruly hair all accord with Morland’s later, extensive iconography.

Morland’s iconography is worthy of note. A self-portrait, apparently painted at the same date as this drawing is in the collection of the National Portrait Gallery, London. But as Richard Walker has suggested, its confused provenance, means that the sitter’s identity is little more than an historic attribution.[3] In fact the discovery of the present drawing suggests that if it is by Morland it dates from slightly early in his precocious career, as by 1775 he was an assured and mature draughtsman who had already developed his characteristic appearance. Morland as depicted in the present self-portrait is instantly identifiable as the sitter in John Raphael Smith’s portrait of 1792 and Morland’s own self-portrait in black chalk of 1795 in the National Portrait Gallery and in miniature at the Yale Center for British Art and even in his final, famous self-portrait The Artist in His Studio and His Man Gibbs painted in 1802. 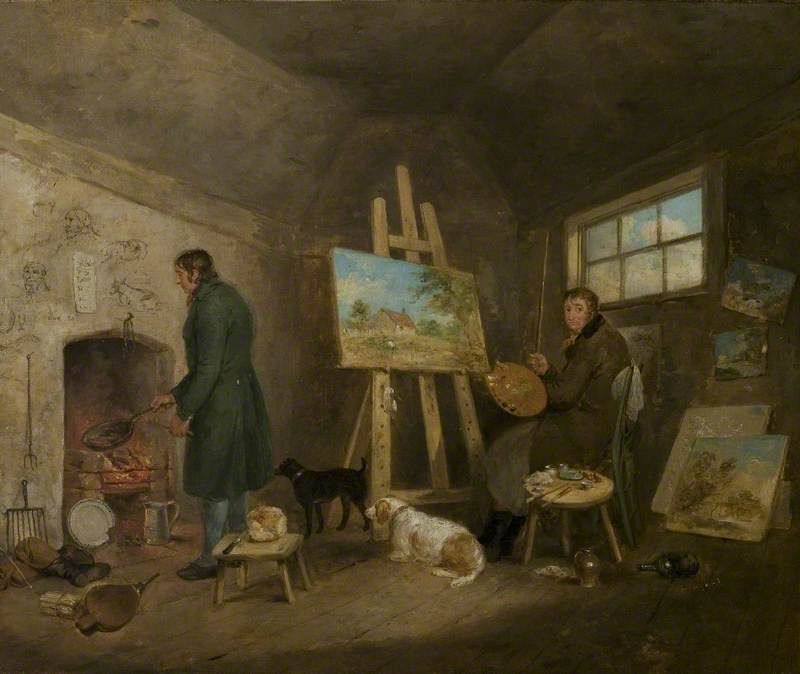 George Morland
The Artist in his studio with his man Gibbs, 1802
Oil on canvas
25 x 30 inches; 635 x 762 mm
By permission of Nottingham City Museums & Galleries

At the age of fourteen Morland's official seven-year apprenticeship with his father began. As in his early years, Henry Morland tutored him with close scrutiny and encouraged him in studying anatomy and in copying the work of earlier masters. His tuition was carried out entirely at home while he worked in his father's studio as an assistant and restorer. He was not permitted to study at the Royal Academy Schools, perhaps from parental concern for his moral welfare or from his father's disregard for the validity of an academic training.

Morland went on to have a successful, if unconventional career and his self-fashioning, as Nicholas Grindle has recently suggested, remained individual and ambiguous.[4] This ambiguity makes the rediscovery of the present portrait extremely interesting, it suggests that Morland was conscious of the power of his image from an exceptionally young age; it also underscores the importance of viewing his later work and reputation in the light of his early emergence as a child prodigy. An engaging, intelligent and beautiful drawing, this self-portrait is an important addition to not only Morland’s oeuvre but the genre of British self-portraiture in the eighteenth century.