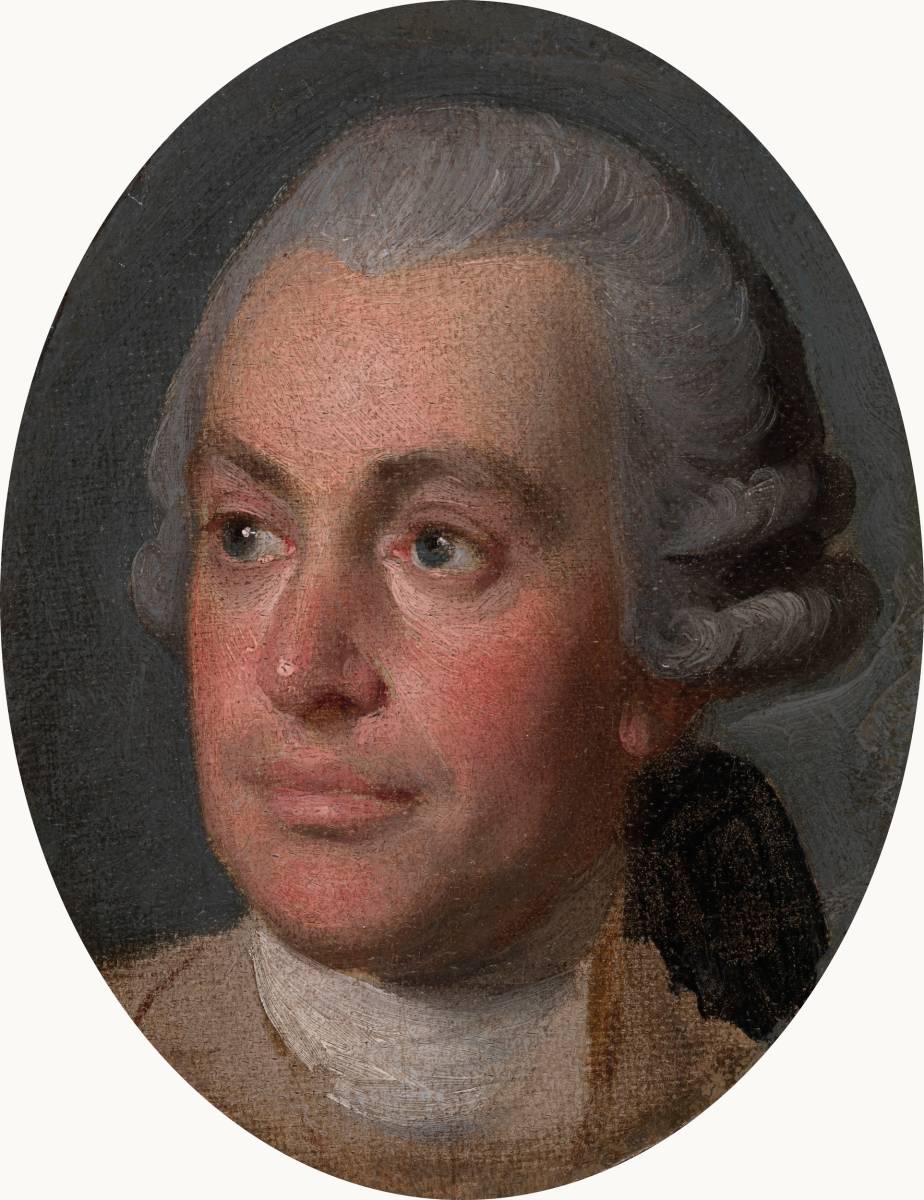 This highly engaging, previously unpublished portrait by Johan Zoffany represents an important addition to his oeuvre. Exceptionally finely painted, the portrait study is unfinished and thus provides us with some information about Zoffany’s working method. Zoffany’s wide ranging training and career encompassing Germany, England, Grand Tour Italy and India has recently received much scholarly attention:  a biography appeared in 2009 followed by a comprehensive survey of his works by Mary Webster in 2011, the same year in which a major exhibition of over a hundred of his works was held at the Yale Center for British Art and Royal Academy of Arts in London.[1] This attention has prompted a reassessment of Zoffany’s role as one of the most versatile and acute observers of British society, but also as one of the finest portraitists of the eighteenth-century.

The sitter in this characterful portrait has recently been identified as the painter Nathaniel Dance.   Dr Martin Postle has suggested that it was one of the heads prepared by Zoffany for his great conversation piece:  Portraits of the Academicians of the Royal Academy In preparation for the first of these monumental canvases, commissioned by King George III to commemorate the foundation of the Royal Academy of Arts in London, Zoffany made a series of small-scale oil studies, at least one other of which survives.[2] In February 1772 Zoffany went to Bath to paint Thomas Gainsborough for inclusion in the conversation piece, the resulting portrait study remained with the sitter’s family until it was presented to the National Gallery in 1896 and subsequently transferred to the Tate in 1955.[3] Like the present picture, the portrait of Gainsborough is fluidly painted and left unfinished, the sitter is seen animatedly looking to the right and would have served as a model for inserting the head into the finished conversation piece. Along with Gainsborough – who seems likely to have refused inclusion on the grounds of his growing animosity towards the hanging committee - the brothers George and Nathanial Dance were also omitted from the group.

For Zoffany friendship was frequently expressed through portraiture and the intimate scale and unfinished nature of the present work reinforces the idea that it was the study of Dance, a fellow Academician and someone he knew well. We know Zoffany was in the habit of painting oil studies during theatrical performances, a fact confirmed by the rare survival of two studies of David Garrick as Abel Drugger in The Alchymist at the Ashmolean, and this head may be the result of studying one of his friends from the theatre. The partially painted canvas reveals Zoffany’s characteristic off-white ground, which is visible at the bottom of the canvas, beneath the sitter’s white stock.[4]

Fluid lines of light brown paint are also clearly visible and these are characteristic of Zoffany’s method for blocking in the features and poses of his sitters. The head itself is bought up to an extraordinarily high level of finish, the features are handled with characteristic delicacy, adding unblended passages of highlight to impart a vitality to the expression. The portrait, which was cut-down at some point and laid-down on a mahogany panel, survives in outstanding condition and directly demonstrates the vivacity and incisiveness with which Zoffany drew with the brush.

We are grateful to Dr Martin Postle for confirming the attribution of the painting to Zoffany and suggesting the identity of the sitter.