This beautifully drawn portrait was made by Thomas Lawrence when he was at the height of his powers as a portraitist and as a draughtsman in particular.

A child prodigy himself, Thomas Lawrence was self-trained as a draughtsman and made small portraits in pastels in Bath for three guineas each before moving to London in 1787. He attended the Royal Academy Schools briefly but pressure from commissions forced him to leave. He exhibited portraits in pastels, chalks and smaller oils at the Royal Academy each year and became friendly with the older artist William Hamilton, who lived nearby and introduced Lawrence to the Siddons family. Lawrence’s early biographer recorded that he spent some of the ‘happiest days of his life’ with the Hamiltons and that they ‘used to draw a great deal from the antique statues at night, whilst Mrs Hamilton would read to them either poetry, history, or works of the imagination.’ In 1789 Lawrence exhibited a spectacular portrait drawing of Mary Hamilton at the Royal Academy, recently acquired by the British Museum, London it is one of the most remarkable of Lawrence’s early portrait drawings. 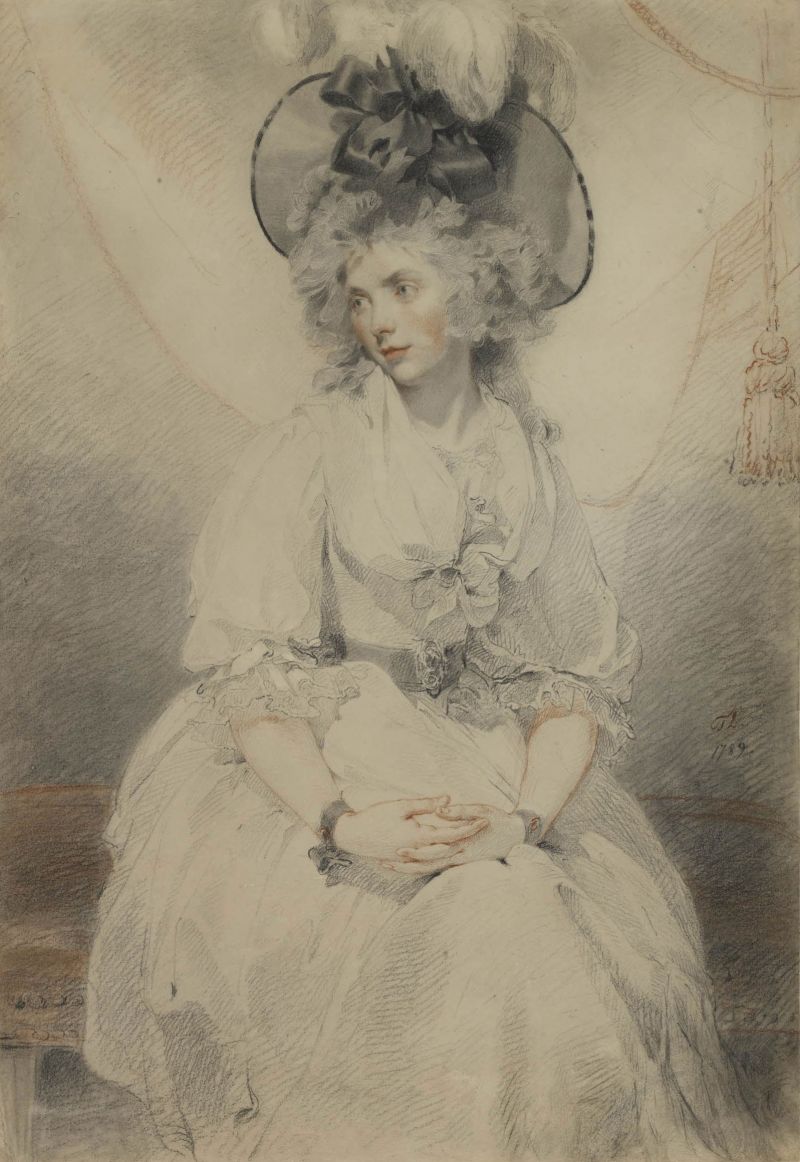 This portrait of Henry Thomas Hamilton was made when he was 10 or 11 and already showing talent as an artist.[1] As the inscription on a label on the reverse of the frame makes clear, Henry ‘evinced an extraordinary degree of talent in Historical painting which profession he embraced.’ In 1809 the diarist Joseph Farington reported that he had seen Mary Hamilton at the Royal Academy:

‘Her son a boy of 15 was with her. He indicates an inclination to drawing and she sd. Lawrence had expressed an intention of taking him to be an articled pupil – but three months have passed and she has not heard from him. I told her I would speak to him, at which she expressed much pleasure.’[2]

Lawrence was a notoriously lax teacher, and Farington’s diaries are full of complaints by his apprentices. However, Lawrence was generous with young artists and there is evidence that he provided Hamilton with some measure of guidance. In a letter to Hamilton dated 30 May 1809, Lawrence included a drawing of his palette with notes on mixing colours and the use of drying agents for paints.[3] Hamilton was admitted a student of the Royal Academy in February 1811 and was given a ticket to study life drawing in December of that year. He subsequently exhibited two works at the Royal Academy in 1812 and 1813, although he died young at the age of 19.

The present drawing, finely worked and executed rapidly in black chalk and finished with touches of red and a small amount of white heightening shows Hamilton seated, looking to the right wearing elaborate, high collar and what looks like a medallion or locket around his neck. Cassandra Albison has suggested that it might be: ‘a miniature in a locket around his neck. Perhaps the locket holds a portrait of his deceased father; Lawrence also owned one of these keepsakes.’[4]