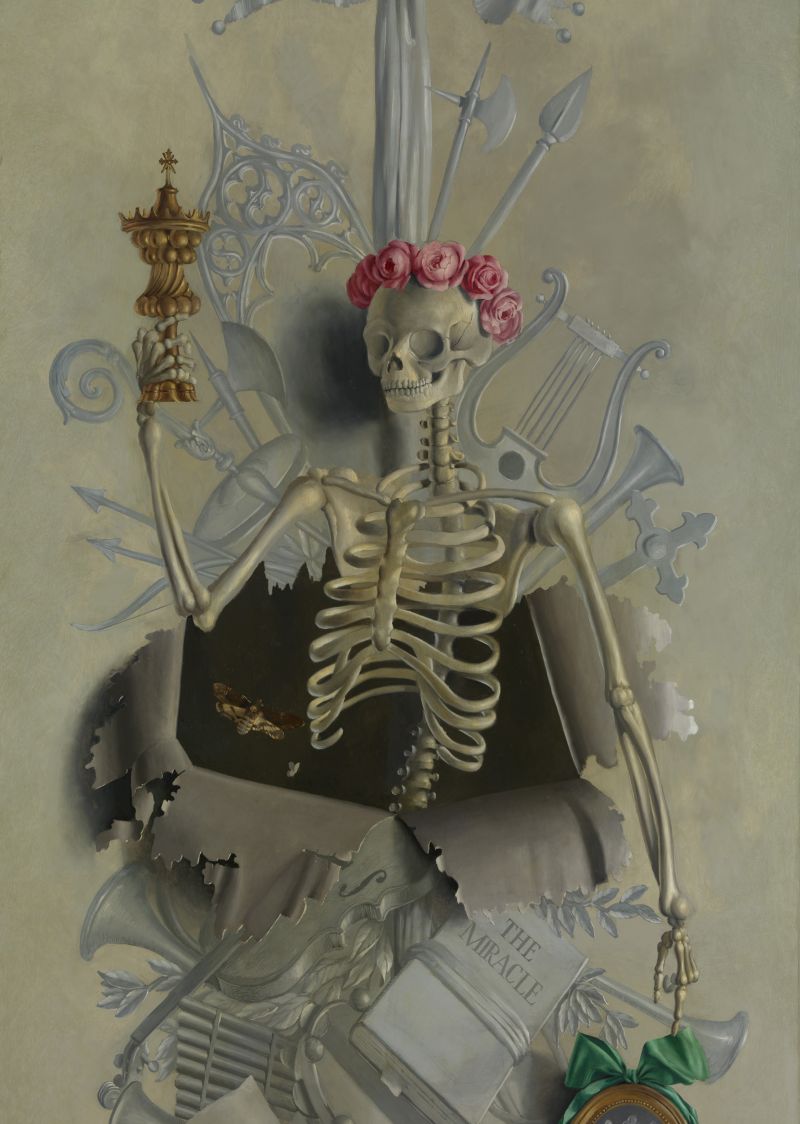 At TEFAF, Maastricht, which opens next Thursday, we are excited to be showing a series of six panels painted by Martin Battersby for Lady Diana Cooper. Painted in 1950 to decorate Lady Diana Cooper’s drawing room at the Château St-Firmin in Chantilly, the panels were conceived as baroque trophies en grisaille, each celebrating periods in the life of Diana Cooper, her husband, Duff Cooper, later 1st Viscount Norwich, a celebrated politician and diplomat, and their son, the writer John Julius, later 2nd Viscount Norwich. Battersby, who had collaborated with Cecil Beaton on stage designs, before becoming a celebrated decorative artist, worked in an elegant, neo-classical style, inflected with elements of surrealism. The panels remained in situ in Chantilly until Diana Cooper returned to London, where they were installed in her drawing room in Little Venice; they have been in store since her death in 1986 and will be exhibited publicly for the first time at TEFAF Maastricht.  We are very excited that this installation is made in collaboration with Soane Britain. 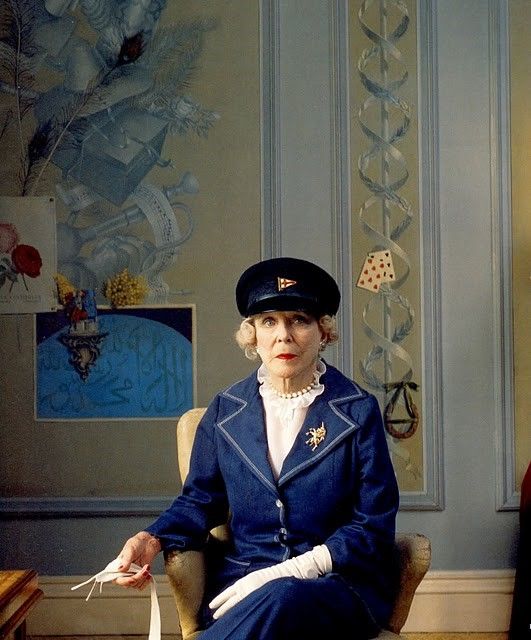 Diana Cooper photographed in front of the Battersby panels

The panels themselves are intensely personal in their design. Battersby had worked as a decorator, then actor before becoming an artist and designer. In 1938 he designed a production of Hamlet with Laurence Olivier; Battersby established a considerable reputation as a stage designer working with Cecil Beaton on the 1945 production of Lady Windermere’s Fan. At the same time Battersby’s decorative painting was in huge demand in Europe and North America. He painted rooms in the Villa Favorita, St Jean Cap Ferrat for Enid, Lady Kenmare; at the Carlyle Hotel in New York; for Mrs Verner Z. Reed of Palm Beach; Mrs Elinor Ingersoll of Newport and Paul Mellon in Virginia. 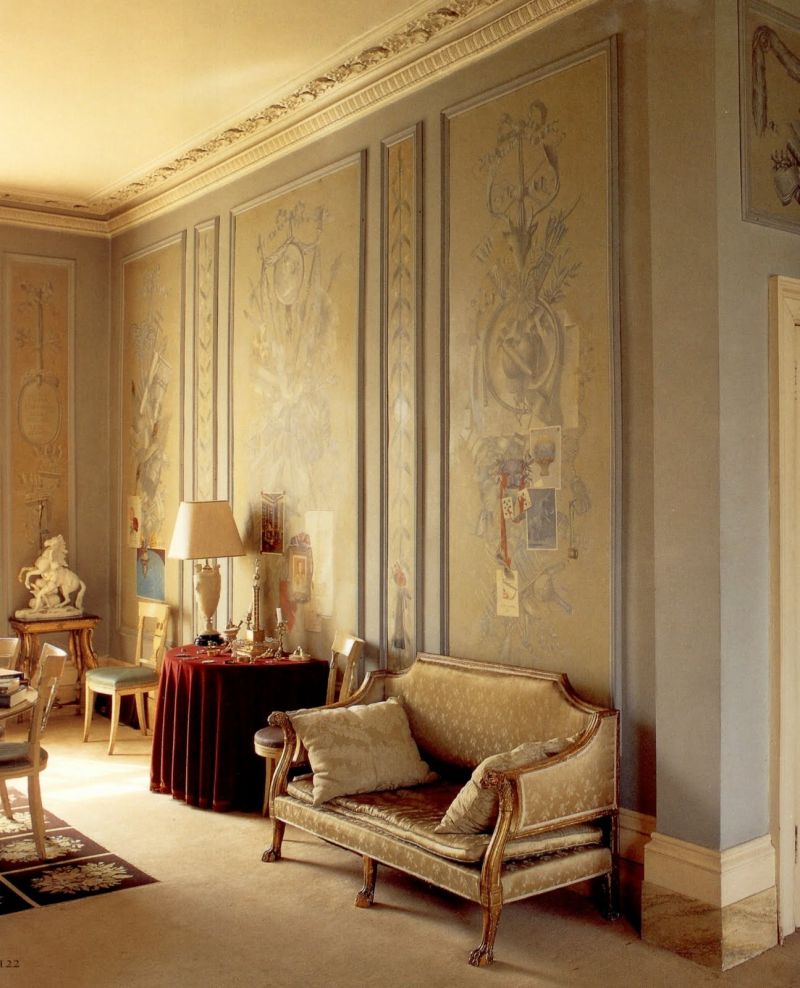 The ingenuity of Battersby’s highly refined, classical interiors and his tendency to litter his designs with whimsical and personal visual references must have appealed to Diana Cooper. In the late 1920s Diana Cooper had commissioned her friend, Rex Whistler, to decorate her drawing room in London with Regency trompe l’oeil and Battersby’s panels preserve something of Whistler’s spirit.

Made at precisely the moment Christian Dior launched his ‘New Look’, Battersby’s panels celebrate the same return to classicism and post war optimism. The suite comprises five panels of grand scale and a small over-mirror. The panels themselves are a lucid mix of historicism, theatricality and romanticism. It was a taste associated with a coterie of refined French collectors and decorators, most notably Diana Cooper’s friend Charlie Beistegui. Battersby’s commission, to complete the decoration of the principal drawing room at the Château St-Firmin, dictated the style, which takes the form of painted trophies in grey collaged with trompe l’oeil details in colour. The room itself formed the backdrop for the Coopers’ social world, which included royalty, politicians and artists; Nancy Mitford and the Duke and Duchess of Windsor were neighbours and close friends. Diana Cooper’s letters and autobiography are filled with encounters with a procession of all the greatest figures of the day.

The most striking panel celebrates Diana Cooper’s career as an actress. Battersby created a trophy celebrating her most famous part, as the Madonna from Max Reinhardt’s 1924 production of The Miracle with gothic tracery, the ‘prompt book’ and musical instruments. The decoration is disrupted by a skeleton – a character from the play, called the Spielmann - bursting through the panel, with a crown of roses and pointing at a frame containing Cecil Beaton’s portrait of Diana Cooper en role as the Madonna. 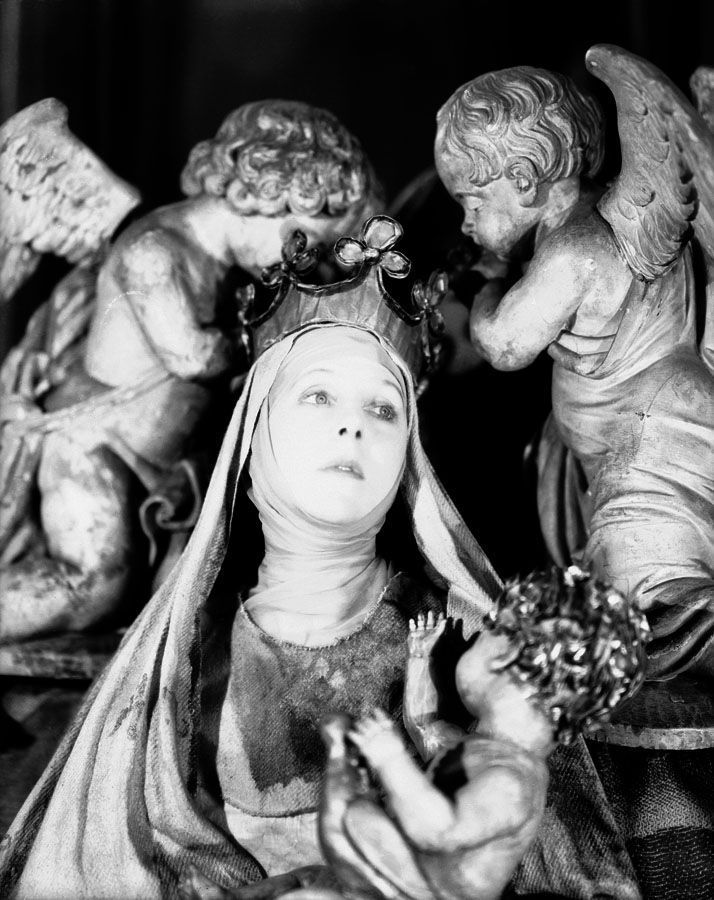 The next three panels celebrate Duff Cooper’s political career. He held various junior ministerial posts, before being made first lord of the Admiralty by Chamberlain in 1937. This period is celebrated in a grand naval trophy with a collaged image of the Admiralty yacht, HMS Enchantress, which the Coopers used to tour the Mediterranean and Baltic. Battersby includes intimations of the impending war: a trompe l’oeil ration book and the ribbon of the DSO, which Duff Cooper had won in 1918. The ration book is particularly notable, as it stands in for a signature, being made out in Battersby’s own name and dated 1950-1951. Duff Cooper took a principled and far-sighted stand against Chamberlain’s policy of appeasement towards Hitler, denouncing the Munich agreement and resigning from the government. In 1944 Cooper was made British representative to the French committee of national liberation in Algiers. Battersby celebrates the Coopers’ time in Algiers with a grisaille trophy including the symbol of the free French, the Cross of Lorraine, a palm tree, Moorish capital and Diana Cooper’s distinctive, wide-brimmed sun hat. French in North Africa.

Following the liberation of Paris, Cooper was made British Ambassador to France. Battersby celebrates the Coopers’ time in Paris in the largest panel, with a spectacular trophy containing allusions to France, war, peace and plenty. The Hôtel de Charost, the British residence, fills much of the iconography: it had been acquired from Napoleon’s sister, Pauline Borghese – who appears in a portrait roundel at the top - by the Duke of Wellington. A collaged photograph celebrates the library created by Duff Cooper at the residence. Here again Battersby has included his signature, in the form of a letter addressed to his flat, 12a Gloucester Road.

As an over-mirror, Battersby designed a panel dedicated to the Coopers’ son, John Julius. As a still-life portrait, it shows the school yard at Eton and a drawing of a stalk, emblematic of Strasbourg, where he read Russian and German at university. The guitar with its sheaf of English and French music points to John Julius’s skill of singing accompanied by the guitar. The final panel celebrates the pleasures of life at Chantilly. A stag’s head and horn for hunting; food, in the form of a large jelly mould, drink, in the form of bottles and a cork; entertainment in the form of playing cards, an opera programme and costume mask. The trompe l’oeil elements include a balloon initialled with an L, a reference to the Coopers’ great friend, Louise de Vilmorin and a depiction of a unicorn, Diana Cooper’s personal symbol.

The panels remained in situ at the Château St-Firmin in Chantilly until Diana Cooper returned to London in the early 1960s, they were then installed in the drawing room of her house on Warwick Avenue. Battersby worked for a number of Diana Cooper’s friends, including Evelyn Waugh, for whom he produced a still life for his library at Piers Court, Gloucestershire. The panels in their refinement of design and whimsical subject matter are a perfect distillation of the social and artistic worlds of early 1950s Paris.