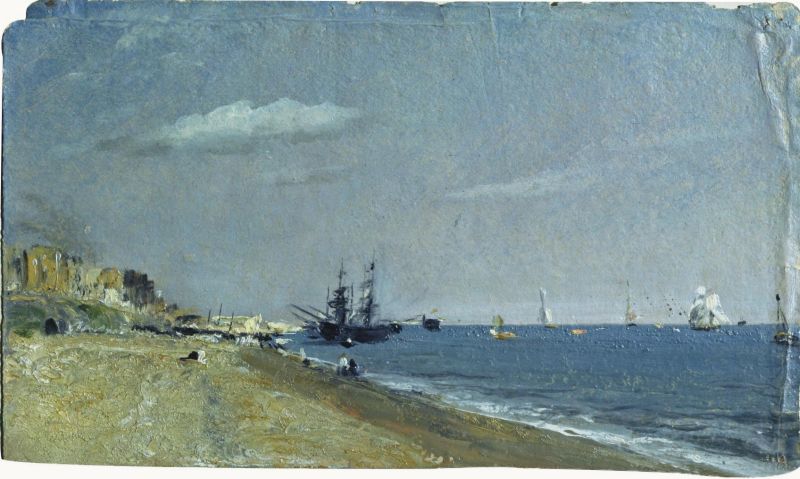 On Friday we visited Brighton Museum and Art Gallery to see the opening of Constable and Brighton. As the title suggests, the show brings together works by John Constable made during his visits to the Sussex coast in the 1820s. Covering his most successful decade professionally, this focussed exhibition gives a fascinating insight into Constable’s working practices and technique. We were delighted to be able to support the show by sponsoring the loan of an important drawing Constable made in 1824 at Brighton, which has come from the Stuart Collection at the Museum of Fine Arts Houston. 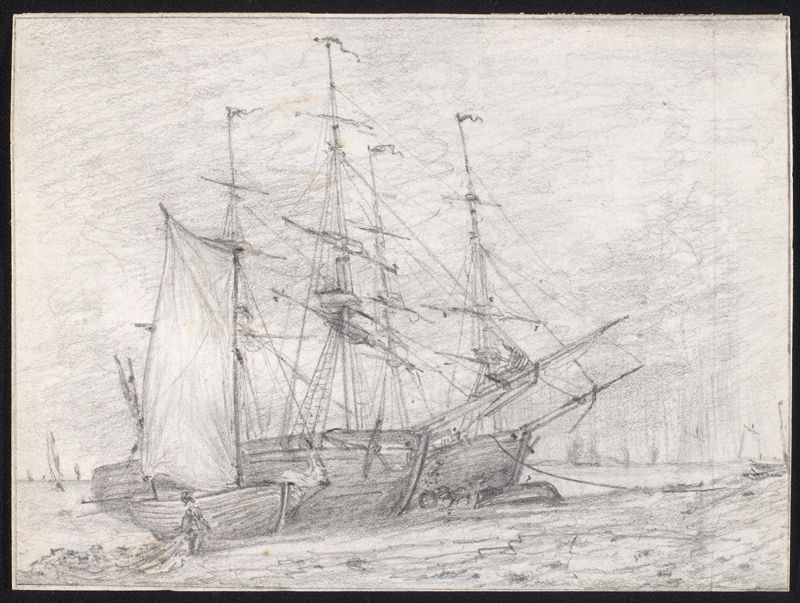 By the spring of 1824 it had become apparent that Constable’s wife, Maria, needed to leave London for the sake of her health. Constable wrote to his friend and correspondent, John Fisher: ‘we are told we must try the sea.’ Constable used his periods spent in the fashionable and rapidly expanding resort to paint the sea, the Sussex landscape and observe the life of a working coastal town. He only made one large-scale exhibition work from these accumulated studies: Chain Pier, Brighton (Reynolds 27.1), which was shown at the Royal Academy in 1827 and is now in the Tate.

Despite his famous antipathy to the town itself – he complained of the ‘endless & indecent confusion’ - Constable evidently responded to the wide, open sea views, writing, in a celebrated letter to Fisher about: ‘the magnificence of the sea, and its (to use your own beautiful expression) everlasting voice.’ It was a landscape which enabled him to explore new climactic and lighting effects. As always with Constable it is fascinating to try and discern precisely what was done en plein air and what was worked up in the studio. The immediacy and freshness of Brighton Beach with Colliers (Reynolds 24.11) from the V&A, with the delicious turquoise sea, rapidly handled shipping and almost cloudless sky, must have been worked entirely outdoors. It has always been associated with Constable’s letter to Fisher accompanying a group of his works, in which he notes: ‘I have enclosed in the box a portfolio of a Dozen of my Brighton oil sketches – perhaps the sight of the sea my cheer Mrs F – they were done in the lid of my box on my knees as usual.’ As with many of the V&A oil sketches, pin holes are visible at the corners and the style is entirely consistent with having been executed out of doors. By contrast, the Rainstorm over the Sea (Reynolds 24.67) or the small, almost square, Coast scene with a stormy sky (Reynolds 24.66) both now in the Royal Academy, seem more likely to be sketches which were finished in the studio.

As always with exhibitions dealing with Constable it is seeing the paintings where he clearly struggled which is so revealing. Hove Beach in the V&A (Reynolds 24.60) is on a larger scale than most of the ‘lid of box’ sketches, it is evidently an idea for a larger painting developing an existing composition (other versions exist), but Constable was evidently indecisive about how to handle the weather, the surf and the shipping on the horizon; clear pentiments show where boats were over painted and the unresolved foreground and sea make it difficult to read. This was Constable on a bad day. By having so many works from a few years in close proximity, the exhibition offers an important opportunity to view Constable’s working methods, shifting modes and artistic struggles over a very short period of time. The variousness of his art at this period is amplified by the inclusion of a clever section which examines the more commercial repetitions of his paintings he was producing at this date for dealers. A pair of paintings of Hampstead (Reynolds 25.7 & 8) commissioned by the Parisian dealer, Claude Schroth, which were begun by Dunthorne and finished in Brighton by Constable, also underscore the variability of Constable’s technique in a single year.

The complexities of Constable’s working methods and the context for the period are expertly explored in the exhibition’s accompanying catalogue, where a series of essays by Anne Lyles and Ian Warrell carefully contextualise the works. The exhibition is an important show and adds greatly to our understanding of Constable at one of the key moments in his career, it is well worth visiting and the catalogue makes a valuable contribution to Constable scholarship.