Earlier in the year we produced a short catalogue celebrating a group of ten drawings by John Constable. As a result of the catalogue we sold a group of six drawings by Constable to the Teylers Museum in Haarlem. This was the first major acquisition of British drawings by the museum and the first major group of works by Constable to enter a public collection in the Netherlands. We were particularly excited by the purchase because it underscores the permeability of influence that exists between British and Continental art in the early nineteenth century.

Constable was fascinated by seventeenth-century Dutch art. As a collector he owned a substantial number of Dutch landscape prints, he borrowed and copied a number of seventeenth-century Dutch landscapes from friends. In the Lectures he wrote at the end of his life, Constable devoted considerable attention to Dutch art. In a passage on Jacob van Ruisdael Constable noted that he:

‘delighted in and has made delightful to our eyes, those solemn days, peculiar to his country and ours, when without storm, large rolling clouds scarcely permit a ray of sunlight to break the shades of the forest. By these effects he enveloped the most ordinary scenes in grandeur…’

In our current catalogue, that has recently gone online here, we have a spectacular sheet from the large sketchbook Constable was using in the autumn of 1827 whilst staying with his siblings by the Stour at Flatford Mill. The drawing depicting his brother, Golding Constable, shooting duck on the Stour. At first sight it appears a quintessentially British image, but Constable was steeped in earlier models and frequently conceived his plein air models as responses to his favourite old masters. In this drawing Constable composes a grand landscape in miniature carefully filled with narrative: the sportsman in his cover, the dog holding a recently shot bird and in the distance a series of duck on the Stour, all illuminated by the rising sun. Constable probably had in his mind Peter Paul Rubens’s landscape of Het Steen in the Early Morning now in the National Gallery, which belonged to his great friend and patron, Sir George Beaumont. The general arrangement of the subject, with the hunter crouched in the undergrowth and central axis of the composition dominated by broken posts, with an open landscape stretching to the right bathed in the early morning sun, is close to Rubens’s design. 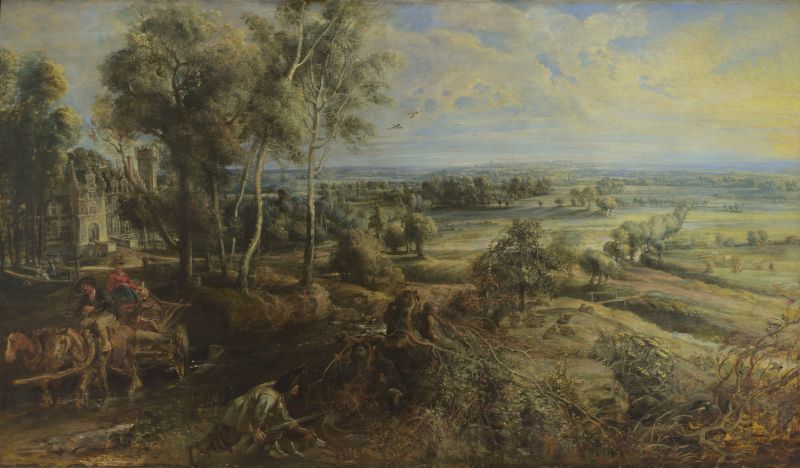 Constable wrote passionately about Rubens, particularly his Het Steen in the Early Morning which he specifically praises in a remarkable passage from his Lectures: ‘in no other branch of art is Rubens greater than in landscape; the freshness and dewy light, the joyous and animated character which he has imparted to it, impressing on the level monotonous scenery of Flanders all the richness which belongs to its noblest features. Rubens delighted in phenomena; - rainbows upon a stormy sky – bursts of sunshine – moonlight – meteors – and impetuous torrents mingling their sound with wind and waves. Among his finest works are a pair of landscapes, which came to England from Genoa, one of which is now in the National Gallery.’

Constable was in turn greatly celebrated on the Continent during his lifetime. Paris was the only city in which Constable achieved any real critical success during his lifetime. In 1824 Constable sold two of his great exhibition machines, The Hay Wain and View on the Stour to the Anglo-French dealer John Arrowsmith who showed them at the Paris Salon the same year. They caused a sensation and Constable was awarded a gold medal by Charles X. Constable’s popularity amongst French artists and collectors meant that by 1835 there were at least twenty-two paintings by Constable in France. Consequently his work had enormous impact on the rise of plein air painting in Europe.

We look forward to the Teylers engagement with Constable and his legacy and are very excited to have been able to help with their exciting new project.