We are excited to be contributing virtually to London Art Week which goes live with a Preview on Thursday 2nd July. The gallery will be open, so do feel free to visit if you are in London. We are excited to be showing a number of new works, including a rare and very beautiful portrait by Thomas Lawrence. Drawn in black, red and white chalk on prepared canvas, an innovative method that Lawrence pioneered to produce some of his most engaging works, this portrait amply communicates why he was considered the greatest portraitist in Europe at this date, admired as much in Paris as in London. There is some debate about the precise status of Lawrence’s large-scale drawings on canvas, but it seems likely that he never intended to take them further, preferring the subtle rendering and immediacy of the various chalks on prepared canvas to the finished portrait in oils. Preserved in spectacular condition, this is one of Lawrence’s most complete and beautiful mature portraits in this medium and despite being reproduced in Frederick Christian Lewis’s lithographic selection Twenty Imitations of Sir Thos. Lawrence's finest Drawings, has remained largely unknown to scholars.

A child prodigy himself, Thomas Lawrence was self-trained as a draughtsman and made small portraits in pastels in Bath for three guineas each before moving to London in 1787. He attended the Royal Academy Schools briefly but pressure from commissions forced him to leave. He exhibited portraits in pastels, chalks and smaller oils at the Royal Academy each year. After initial success on the walls of the Royal Academy, Lawrence became a full member of the Academy in 1794 at the age of 25 and by 1800 was considered the leading portrait painter in Britain.

This sitter in this portrait is Isabella Mary Elderton, the first wife of John Fairlie. Fairlie served as agent for the 5th Duke of Rutland on his estates in Cambridgeshire. A drawing recording this portrait by Henry Bone survives in the National Portrait Gallery, where it is dated 1825. As Fairlie married Isabella Elderton on August 1st 1826 at St Alphege Church, Greenwich, it seems likely that Lawrence’s portrait was made to celebrate their engagement, the sitter was 18 years of age.

The medium represents perhaps Lawrence’s greatest innovation as a portraitist, the use of black, red and white chalk on prepared canvas. It was a technique which offered Lawrence the opportunity to demonstrate his precautious talents as a draughtsman on a large scale. As Cassandra Albinson has observed: ‘while his drawings on paper can seem distant from the bravura style of his oil paintings, Lawrence’s chalk-on-canvas portraits reveal the relationship between his two practices.’  There is anecdotal evidence that Lawrence made these kind of under-drawings in preparation for all his major works. In 1838 the American artists Thomas Sully visited Richard Evans, who had studied with Lawrence and produced copies of his works. According to Evans, Lawrence ‘often made careful drawings in black chalk, heightened the lights with white chalk, would sometimes add a few touches of red, and even tint the eyes and hair the proper colour – and over this preparation make his dead colour!!!!.’  But as Albinson points out, there is currently no corroborating technical evidence.

It seems more likely that Lawrence conceived of these more complete drawings on canvas as finished. The majority of surviving examples are of beautiful, young women – for example the beautiful portrait of Dorothea Lieven of 1818 now in the Hermitage, St Petersburg and the complex portrait of Countess Thérèse Czernin of 1819 now in a private collection – suggesting that he found the delicate tonal qualities of three different chalks on a prepared surface a particularly expressive medium. In the present portrait, Lawrence has lavished attention on Isabella Fairlie’s hair, showing a mass of dark ringlets piles on her head, these frame her beautifully described features, highlighted with touches of red chalk and a few highlights of white. Lawrence has left Isabella’s lavish costume a loose collection of suggestive black and white chalk lines, preferring to concentrate on the sitters’ beautifully sculpted head. 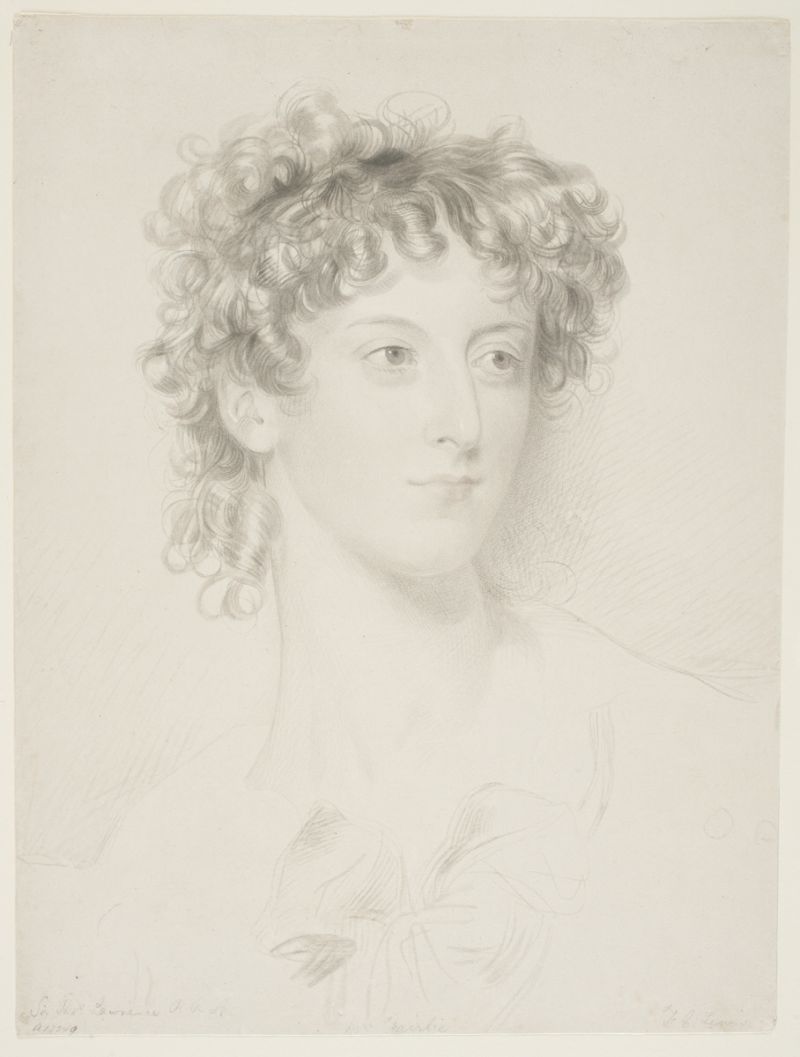 The evidence demonstrates that this portrait was regarded as a completed work of art. Isabella Fairlie died when she was only 22 years old, just a year following the death of her infant son, John, the couple's only child. Following her death, her portrait remained with her husband. John Fairlie loaned it to the noted engraver-publisher Frederick C. Lewis, who translated Lawrence's delicate lines into a remarkable lithograph and published it as part of his folio of life size portrait engravings entitled, Twenty Imitations of Sir Thos. Lawrence's finest Drawings of Sovereigns, Statesmen, Ladies &c. Isabella's portrait was advertised by name in Lewis' advertisements for the folio published in Bent's Monthly Literary Advertiser, London, in 1840 and 1841.