We have a busy schedule ahead: September sees the completion of a catalogue of recent acquisitions which will be published later this month; in October we are excited to be exhibiting at the second edition of TEFAF New York. During November and December we will be mounting an exhibition in New York and then back in London in collaboration with Marcus Flacks entitled Parallel Lines, the idea is to bring together British landscape drawings and contemporary Chinese works.

We will be discussing some of our recent discoveries and acquisitions in our news section over the coming weeks. Sculpture in both a British and wider European context is a particular interest and one of the most interesting and beautiful objects in our new catalogue will be a relief of Venus and Cupid by the German neo-classical sculptor Johann Valentin Sonnenschein.

Sonnenschein was an early mentor of the sculptor, Johann Heinrich von Dannecker, and despite his work featuring prominently in the 2003 exhibition Playing with Fire: European Terracotta Models 1740-1840 held at the Metropolitan Museum of Art, New York, Louvre, Paris and Nationalmuseum, Stockholm, there are few examples of his work outside German or Swiss collections. Technically highly skilled, our relief is an early work, but it displays the theatricality which is such a feature of his mature sculptural groups.

In 1761 Sonnenschein began training in his native city of Stuttgart as a stuccoist under Luigi Bossi, before entering the Karlsschule in Stuttgart, where he studied with Friedrich Wilhelm Bayer.  Under the patronage of Karl Eugen, Duke of Württemberg, he decorated Schloss Solitude near Stuttgart; he became a member of the Ludwigsburg Kunstakademie in 1772.  After moving to Switzerland, Sonnenschein made large-scale busts, amongst them that of Jonann Konrad Heidegger, the mayor of Zurich (1778, bronze; Zurich, Schweizerisches Landesmuseum), as well as small-scale portraits in terracotta, including Susanna Rosina Kupfer (1798; Zurich, Schweizerisches Landesmuseum).  He is, however, best known for his small terracotta genre scenes.  Having served as a modeller for the Ludwigsburg Porcelain Factory earlier in his career, the artist later worked in the same capacity for the Zurich Faience and Porcelain Factory in Kilchberg-Schooren.  He also taught at the newly founded Kunstschule in Bern from 1779 to 1815. 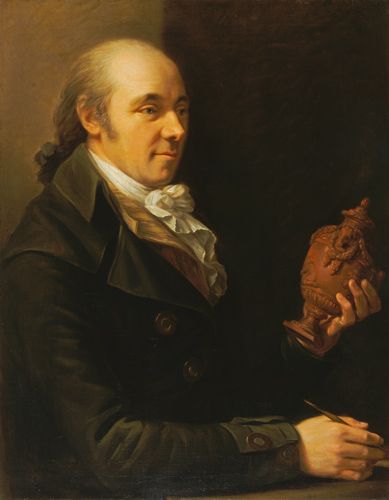 In his most impressive works, such as the spectacular Memorial for Ludwig Rudolf von Jenner (1806) in the Historisches Museum, Basel, Sonnenschein crystallises the tenebrous qualities of the sublime pushing his neoclassical figures into compositions of romantic emotion. This relief of Venus and Cupid dates from earlier in his career. Made in Zurich in 1780, the terracotta plaque retains the qualities of Rococo sensuousness which he must have learnt whilst working as a stuccoist in Stuttgart. The composition shows Venus recumbent on her bed, her body twisted to kiss her son, Cupid; in the background two putti are shown on a bed of clouds, holding an arrow (the traditional symbol of Cupid) and a garland. Sonnenschein models Venus with a sense of latent eroticism both in her contorted pose - legs opened, with one foot on the ground, the other bent behind her – and viewpoint. Sonnenschein depicts Venus from a slightly elevated position, allowing the viewer to look down on her naked form. The basic composition seems to have been based on a sixteenth-century Italian model, possibly after a print of the same subject.

As Burkard von Roda has pointed out, Sonnenschein is an exceptional technician in terracotta. The relief is modelled throughout with remarkable delicacy and freedom. Texture is everywhere exploited: from the crisp, intricate folds of the sheets, to the tassel and fringe of the canopy to Venus’s richly worked hair. Sonnenschein exploits the rilievo schiacciato with incised lines suggesting the continuation of the canopy, vase and volume of clouds.