We are delighted to be back for the second year at TEFAF New York Fall. Our stand this year will be showcasing the recent acquisitions published in our latest catalogue. The catalogue – and exhibition – cover over a century of British art and includes paintings, drawings, pastels and several spectacular pieces of sculpture in terracotta.

Amongst the highlights is Jean-Étienne Liotard’s great portrait of Francis Owen which is being exhibited in New York for the first time. It was painted during Liotard’s second trip to London in 1773 on an unusually large scale, the portrait is executed in oil, a medium rare in Liotard’s oeuvre, yet it is handled with all the minute sophistication, compositional innovation and psychological power he generally reserved for his works in pastel. It was great fun to research because there were so many question marks over this apparent anomaly in Liotard’s oeuvre.

Why did Liotard produce such a grand portrait, in an unusual medium for an almost unknown Shropshire squire? Why was Owen shown in elaborate seventeenth-century costume with a somewhat eccentric pose?

These were all questions raised by Roethlisberger and Loche in their magisterial catalogue raisonné of 2008. Here are some answers:  Owen was intimately connected with another of Liotard’s British patron of the 1770s, James Hamilton, 2nd Earl of Clanbrassil. Clanbrassil was a friend and correspondent of William Ponsonby, 2nd Earl of Bessborough. Like Bessborough, Liotard’s most important British patron, Clanbrassil had a political career in Britain as well as Ireland, sitting as MP for Helston in Cornwall.

Clanbrassil had been returned for the constituency of Helston in 1768 on the interest of Francis, 2nd Lord Godolphin whose first wife, Lady Barbara Bentinck, was a sister of Clanbrassil’s mother. Clanbrassil was forced to make way in 1774 for Francis Godolphin Osborne, Marquess of Carmarthen and later 5th Duke of Leeds, the grandson of Francis, 2nd Earl of Godolphin. Helston returned two MPs for the Godolphin interest and in 1774 the second was Francis Owen. Owen was himself a member of the Godolphin family, his mother, Mary, was Francis, 2nd Lord Godolphin’s sister, making Clanbrassil’s mother Owen’s aunt by marriage. The two MPs for Helston, Clanbrassil and Owen, both therefore sat to Liotard within months of each other and it is likely that Clanbrassil introduced Owen to Liotard.

As to the model for Owen’s portrait, Liotard seems to have had Van Dyck in mind. Owen is shown with his right hand on his hip and left hand pointing down in a distinctive gesture. This formation is borrowed from Van Dyck’s portrait of Nicolaes van der Borght in reverse. Liotard is unlikely to have known the portrait itself, which was in Antwerp, but probably knew the engraving by Cornelis Vermeulen engraved in reverse in 1703. Vermeulen’s print not only provides the model for Owen’s left hand and lace cuff, but it also provides the design of his doublet, with bows and buttons, the ruff and even the fall of the cloak; Liotard has followed the highlights in Vermeulen’s depiction of van der Borght’s cloak precisely. The source for Owen’s pose has not previously been noted and it offers a new perspective on Liotard’s inventive use of prints. 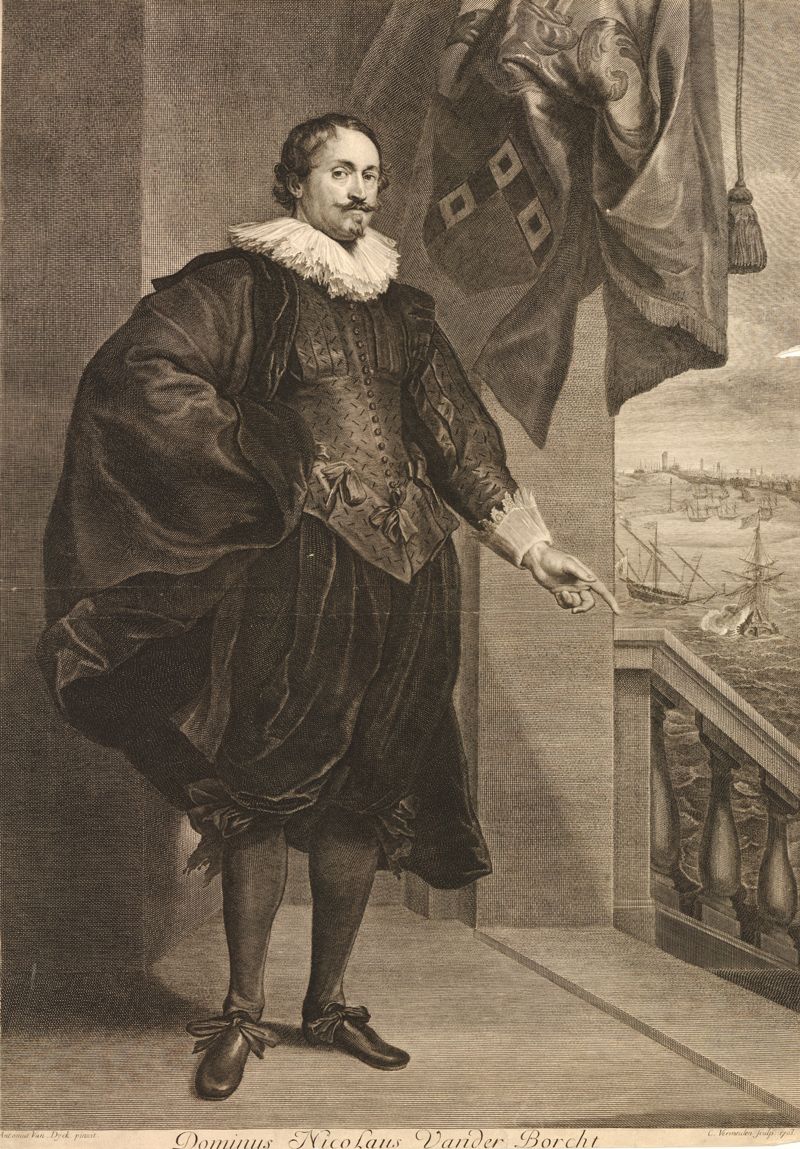 Shortly after the portrait was delivered, and before Owen could have a chance to take up his seat in parliament, he was killed by the fall of a bridge over which he was riding. The portrait passed to his sister, Margaret, who married Owen Ormsby in 1777 and remained with their descendants until 2017. Despite being exhibited in Cardiff in 1948, it remained in comparative obscurity until published by Roethlisberger and Loche in 2008.