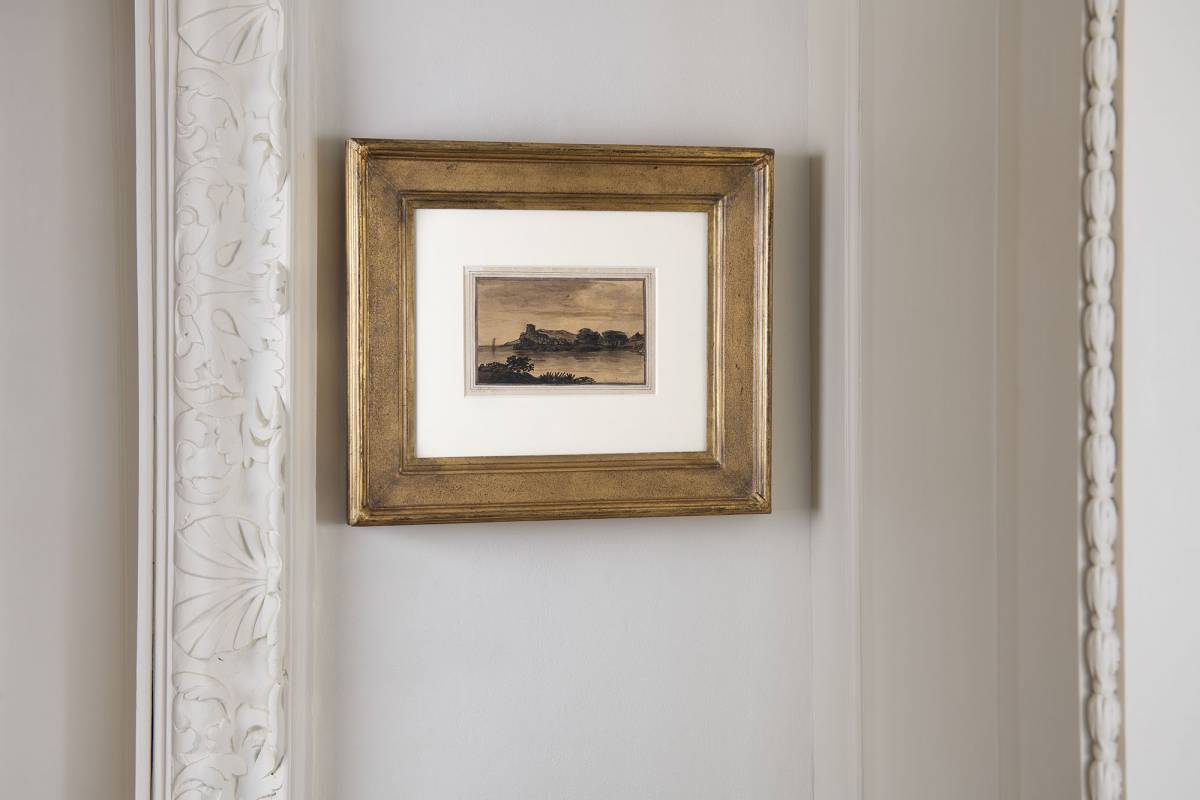 This boldly worked ink drawing was made by Alexander Cozens according to the rules he adumbrated in his ‘New Method’. A successful drawing master and landscape painter, Cozens provided a system whereby apparently accidental ‘blots’ were developed into highly refined classical landscapes. Aimed at amateurs, the ‘New Method’ codified much of the intellectual underpinning of professional painters of the period, such as Thomas Gainsborough.[1] In the present beautifully worked drawing, Cozens has developed an initial blot drawing with the brush to produce a complex and highly structured landscape. The drawing, which was laid down by Cozens on his distinctive, wash-lined mount, is carefully signed both on the sheet and on the mount.

Alexander Cozens's first drawing manual was published in 1759: An Essay to Facilitate the Inventing of Landskips, Intended for Students in the Art.[2] In the two-page explanatory essay he began with a passage from the 1724 English edition of Leonardo da Vinci's Treatise on Painting, which described how invention of composition might be assisted by looking at accidents of nature, such as old walls covered with dirt or streaked stones. Cozens explained that a happy accident with an adept pupil had led him to improve upon Leonardo by creating those imperfect forms on purpose with some degree of design, and then using them as the basis for landscape compositions. These ‘rude black Sketches’ or ‘blots’ were drawn swiftly with a brush dipped in Indian ink, from which hints were taken for the outline of a landscape drawn on a clean piece of post paper laid on top. In A New Method he explained that ‘an artificial blot is a production of chance, with a small degree of design’ and should be embarked on only after the practitioners had possessed their minds ‘strongly with the subject’. He defines the ‘true blot’ as ‘an assemblage of dark shapes or masses made with ink upon a piece of paper, and likewise of light ones produced by the paper being left blank.’[3] He provided eight pairs of blots and outline landscapes drawn from them as examples of the eight styles of composition, which he listed in the essay.

Cozens’s ‘blot’ technique was fully evolved by the 1750s, but he did not explain it in detail until the publication of A New Method of Assisting the Invention in Drawing Original Compositions of Landscape in 1786. It is clear the drawing is derived from a blot, the simple areas of wash have been elaborated by the use of a brush, the method for the creation of such studies Cozens labelled as: ‘a Sketch from a Blot with a Hair Pencil, as a Preparation for a Finished Drawing.’ The small sheet also shows evidence of the use of a read pen – in the tree in the vegetation in the foreground - and it is clear that he regarded it as a successful development, because the drawing was carefully mounted, inscribed and signed by Cozens himself.

Preserved in excellent condition, this small, intense study provides powerful evidence of the systematic approach to landscape drawing which Cozens developed towards the end of his career. Fluidly worked in rich, Indian ink this concentrated study points to both the eighteenth-century fascination with the rational world of classification and the emotional potential of the irrational accident.