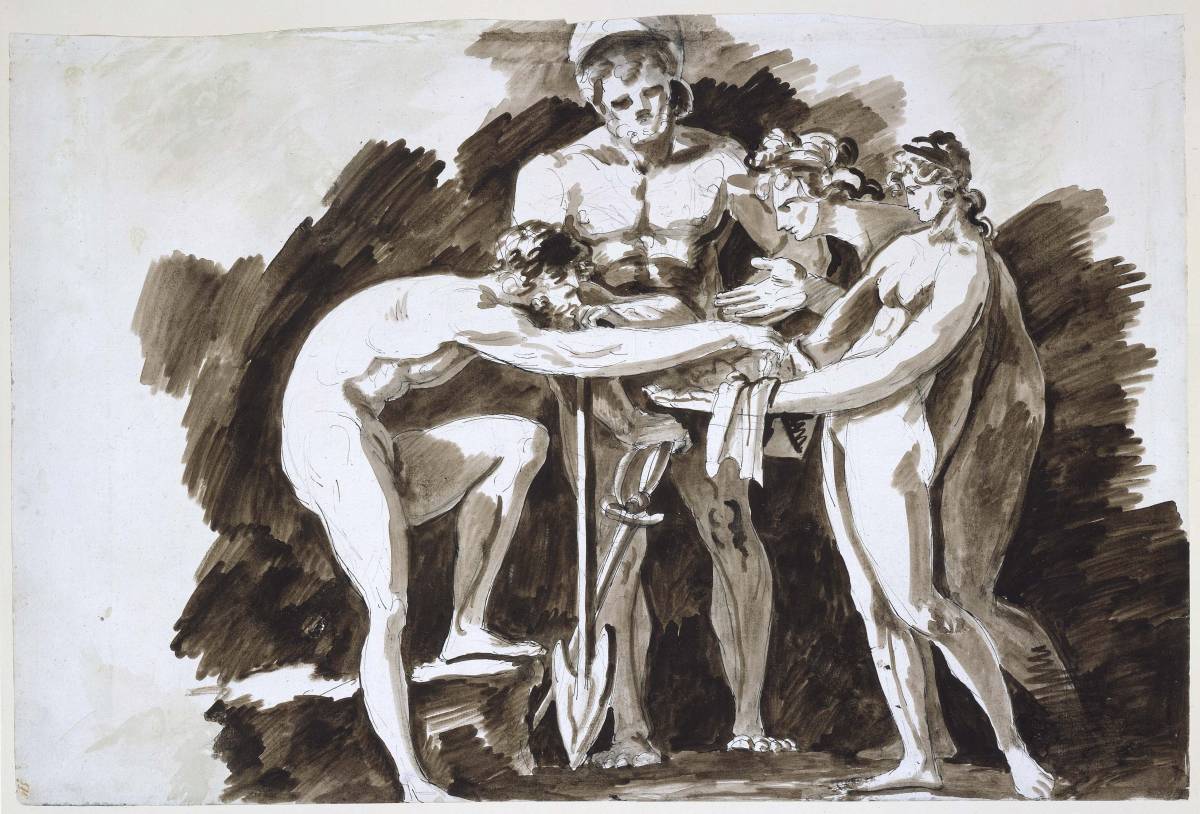 This drawing is a sheet from an album made in Rome in the late 1770s. The album has stimulated periodic debate amongst scholars over the last forty years and the drawings have been variously attributed to James Jefferys and Prince Hoare. Executed in a distinctive manner, they are now recogniSed as exemplary of the violent imagination of British neo-classicism and widely regarded as some of the most graphically advanced works made in late eighteenth-century Europe.

This drawing belongs to a group, which comprise some twenty large sheets and a similar number of smaller sheets, which have been known since they were extracted from an album and exhibited by Roland, Browse and Delbanco in 1949. Made in Rome and demonstrating a close interest in sculpture as well as Italian printmaking, they seem to have been drawn by a member of the international circle of artists who worked close to the Swiss painter Henry Fuseli. Various attempts have been made to identify the hand, who was christened by Roland, Browse and Delbanco ‘The Master of the Giants’ on account of the colossal, heroic figures with attenuated limbs which characterise the majority of the sheets. The most convincing attribution was made by Nancy Pressly, who noted the similarity of some of the works formerly contained in the Roland, Browse and Delbanco album with the surviving works of the British history painter James Jefferys.[1]

Jefferys arrived in Rome in 1775, having received a scholarship from the Society of Dilettanti to practice as a history painter; a series of his historical studies survive in the Royal Academy of Arts, which along with a signed drawing in Maidstone Library, were used by Pressly as evidence for his authorship of the album. Whilst some of the identified drawings show obvious stylistic affinities with Jefferys’ work, others, including this newly rediscovered sheet do not. Jefferys’ pen and ink drawings tend to be richly hatched with a mass of vertical lines, the forms described in a geometric mesh, with only the major areas of shadow being worked in wash. By contrast the present sheet is completely lacking in hatched pen lines, the forms and features being strongly modelled in wash, with a distinctive, curved pen and ink line used to describe the outlines and contours of the figures. This sheet therefore raises the possibility that more than one hand was responsible for the contents of the album.

In the early 1950s both the collector Leonard Duke and the great Fuseli scholar, Frederick Antal, suggested that the sheets might be the work of the painter and sculptor Prince Hoare. This is an attribution which deserves greater consideration, particularly as the present drawing corresponds closely to Hoare’s surviving work. Hoare arrived in Rome in 1776 and quickly established himself amongst artistic circles in the city, he is recorded living in the Strada Felice along with William Pars, Alexander Day and James Nevay. Hoare became particularly close friends with James Northcote, who recorded their frequent trips to draw in the Sistine Chapel.[2] Both Hoare and Northcote were friends and followers of Henry Fuseli. Fuseli arrived in Rome in 1770 and shortly afterwards began to produce highly inventive interpretations of literary subjects. In common with the sculptors Johan Tobias Sergel and Thomas Banks, Fuseli found in the prescribed diet of Raphael and Michelangelo, not classical harmony but vast, swollen heroic bodies engaged in violent actions, ingredients he recast to form a distinctive visual language. It was a language adopted by a large number of young painters and sculptors then studying in Rome.

Both Northcote and Hoare copied a number of Fuseli’s Roman sheets – Hoare’s drawing after The Death of Duke Humphrey of Gloucester survives in the British Museum and a copy of one of Fuseli’s five-point sketches is preserved at Yale – and both began producing compositions in a similar style. The geographic proximity of the painters, their personal intimacy and stylistic similarities has caused difficulties in working out questions of attribution for later scholars. We are afforded an idea of Hoare’s work from an autograph sketchbook from his Grand Tour consisting of over a hundred studies, principally of famous antique sculptures and old master paintings, preserved in the Victoria and Albert Museum, London. These drawings offer further support for the attribution of the present sheet, since the handling of wash and expressive exaggeration of hands are similar in both. Whilst there is little to link Hoare and Jefferys, it must be a possibility that they both contributed to the album, perhaps along with Northcote and others in Rome in the Summer of 1779.

This fluidly worked sheet ranks as one of the grandest of the drawings from the Master of the Giants Album. As with so many of Fuseli’s boldest drawings, the present sheet shows grand, muscular figures in action. The taut physique of the bearded figure in the centre captures the dramatically overblown qualities of late Roman sculpture which Fuseli so admired. As with so many of Fuseli’s drawings, the literary source of the sheet is not immediately apparent. Although all the figures are naked, it may well be a depiction of a Shakespearean subject. William Pressly has identified many of the subjects depicted in the Roland, Browse and Delbanco album as being from English literature and Shakespeare in particular. The scene appears to show a scene at a graveside, the figure seen in profile on the left is apparently being presented with a severed head, held in a cloth by the female figure on the right. The presence of a spade in the centre of the image confirms that this is either a burial or exhumation. The most obvious source from Shakespeare is the gravedigger scene from Hamlet (Act V, scene 1), although the iconography does not quite fit the text. It is possible that the scene shows another scene altogether, such as King Herod being presented with the head of John the Baptist. The ambiguity of the subject-matter lies at the heart of the appeal of many of the sheets in the Master of the Giants Album, whatever the precise source, it is used by Hoare to create a dynamic image which allows him to play with a complex group of highly sculptural figures. Hoare revels in the license to distort, exaggerate and stylise showing the figure in profile on the left with impossibly long limbs and the second female figure on the right with a dramatically over-sized hand. It is in these grandly exaggerated figures we find the essence of the British response to the prescribed Grand Tour diet of the antique and high Renaissance classicism which would fuel the creativity of such artists as William Blake in the following generation. 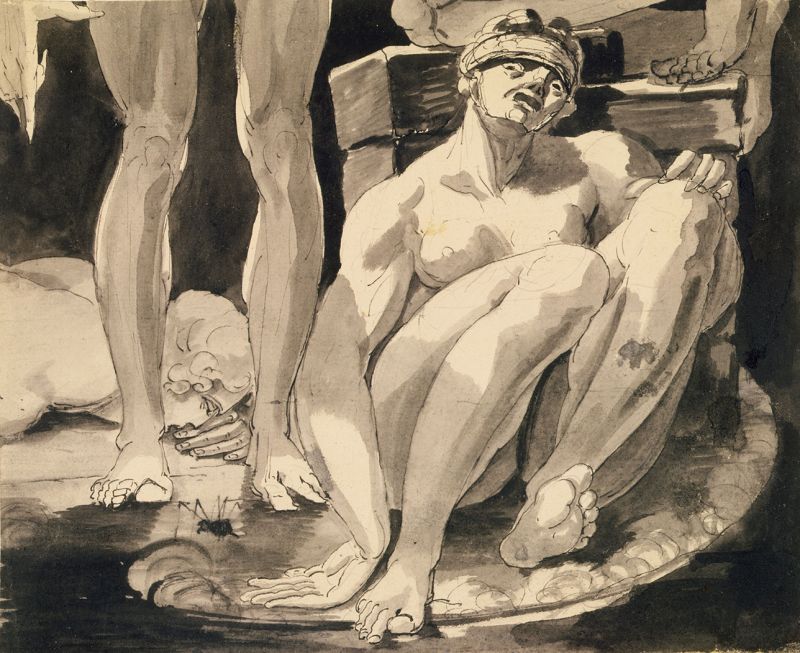