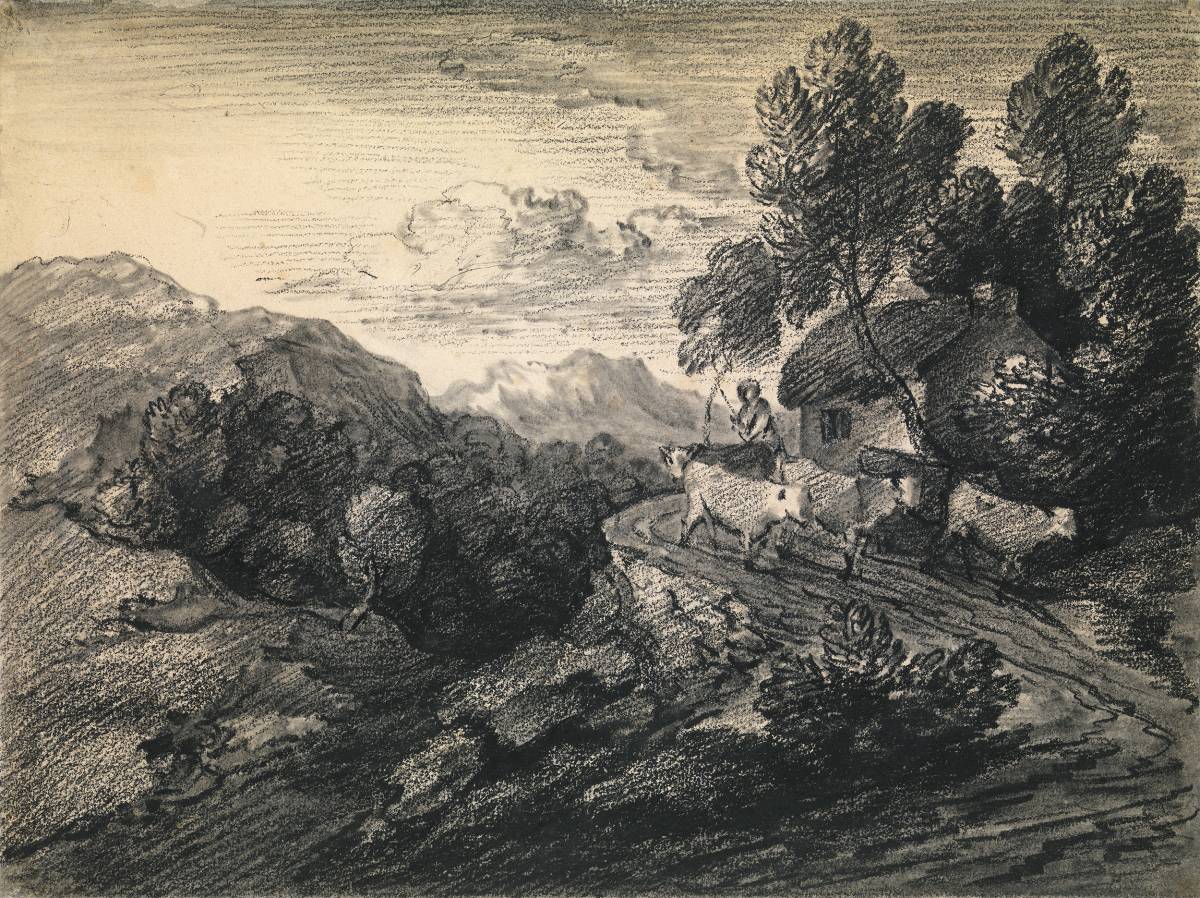 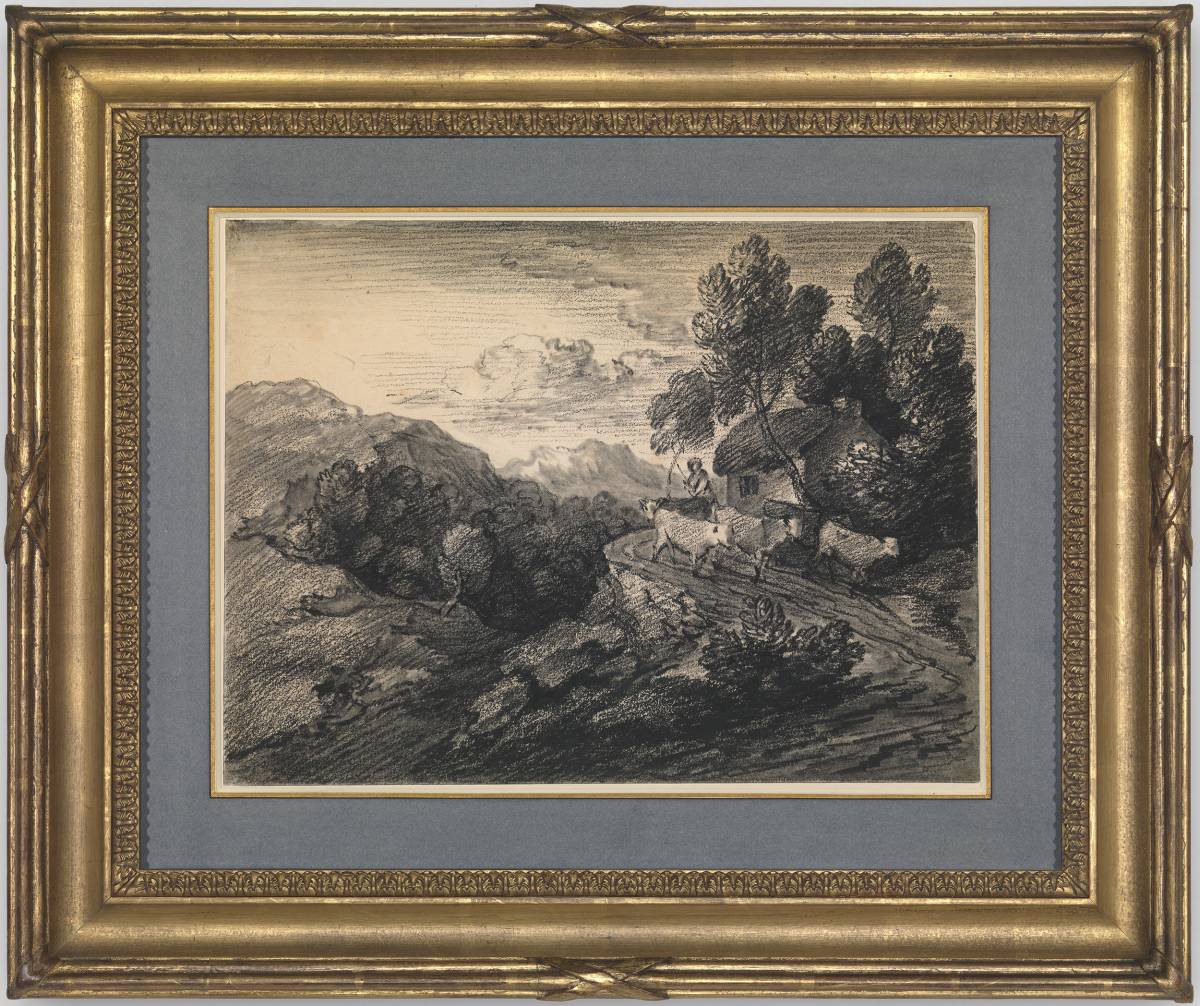 This is one of the finest landscape drawings Thomas Gainsborough made during his maturity; it stands as one of the purest statements of his ideas about composition, technique and the status of drawing within his own art.

Unusually amongst Gainsborough’s landscape drawings the present sheet had a public life in Gainsborough’s own lifetime having been printed in aquatint, in reverse, by Thomas Rowlandson in Imitations of Modern Drawings. Preserved in outstanding condition, the sheet has an unbroken provenance from the great eighteenth-century collector Charles Lambert and then in the collections of the banker and collector William Esdaile before being acquired by the dukes of Devonshire and remained in the Cavendish family at Holker Hall until sold in 1994. 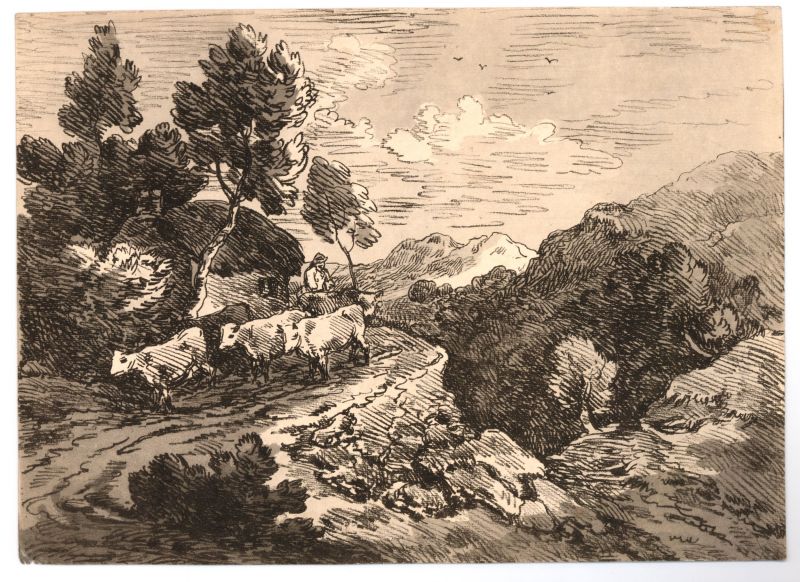 The present sheet perfectly encapsulates these qualities: Gainsborough has simply used black chalk on wove paper to create a composition of ‘stony bank’, ‘a few trees’ and ‘distant hills’. The sheet is part of a body of drawings Gainsborough made, which were highly prized by contemporary collectors, presumably precisely because they evoked an emotional response, characterised by Edwards as ‘a certain degree of solemnity.’

The idealised composition is partly inspired by the work of Gaspard Dughet, whose landscapes would have been familiar to Gainsborough and his contemporaries both in the original and through the medium of engraving.[2] Dughet, known throughout the eighteenth century as Gaspard Poussin, offered Gainsborough a vocabulary of forms and most importantly compositional devices for his own works. Dughet’s pictures frequently contained serpentine tracks, often with a flock of sheep or herd of cows with a solitary herdsman or shepherd, framed by trees, with groups of rustic buildings in the middle-distance and hills on the horizon. The present drawing is a precise distillation of these Gaspardesque features. It is not a direct copy, nor does it directly quote from Dughet’s works, but it approximates the ‘machinery’ of his works.

Our drawing demonstrates Gainsborough’s sophisticated refining of features learnt from Dughet. Gainsborough is consciously engaged in the action of imitation. To an eighteenth-century audience, this was not a negative process, but an intellectual and creative activity that placed the artist on a level with the model he was imitating. In Johnson’s words, imitation was: ‘a method of translating looser than paraphrase, in which modern examples and illustrations are used for ancient, or domestick for foreign.’ Comparing our drawing to a sequence of related sheets gives a sense of this visual process of imitation. A sheet Gainsborough gave to Richard French and now in Melbourne is tellingly inscribed: ‘original chalk drawing by Gainsboro…after the style of Gaspar Poussin.’[3] Here then is an undigested essay in Dughet’s style. The drawing is close to the kind of composition that Dughet was famous for: a serpentine track is visible on the right, a solitary shepherd is seated in the middle-distance observing his flock in the valley below, beyond him is a complex of vaguely antique buildings and distant mountains. A sheet in the Whitworth Art Gallery, Manchester shows Gainsborough’s elaboration of this model. The antique buildings have been eliminated and the landscape is more discernibly British, but the winding track and a herd of cattle with their attendant herdsman have been introduced. This sheet, and its replica, form the framework for Gainsborough’s final imitation. In our drawing the landscape takes on a distinctly British character completing the process of imitation described by Johnson, the translation of the foreign to ‘domestick’, the herdsman and his cattle still traverse the serpentine track, but in so doing they pass a distinctly British thatched cottage. In these three sheets it is possible to view Gainsborough’s process of refinement, playing with Gaspardesque features to produce different iterations of the same composition. Varying the precise forms, fall of light and precise combination of the same group of features, Gainsborough produced four distinct drawings each ‘after the style of Gaspar Poussin.’

Gainsborough was working in a market driven by a desire for old master drawings. There is growing evidence that drawings such as this were viewed as sophisticated essays on earlier old master drawings and that they directly appealed to those collectors who also acquired earlier works. It is telling that the first two owners of the present drawing were both major connoisseurs and collectors of old master drawings. Charles Lambert owned a celebrated group of landscape drawings by Claude and William Esdaile was a considerable collector of landscape drawings by seventeenth-century Dutch draughtsman, including an important group of Rembrandt drawings.

It was not simply the formal elements of the composition that collectors appreciated, it was Gainsborough’s technical virtuosity. Edwards again offered a subtle account of Gainsborough at work.

‘A process rather capricious, truly deserving the epithet bestowed upon them by a witty lady, who called them moppings. Many of these were in black and white, which colours were applied in the following manner: a small bit of sponge tied to a bit of stick, served as a pencil for the shadows, and a small lump of whiting, held by a pair of tea-tongs was the instrument by which the high lights were applied; beside these there were others in black and white chalks, India ink… with these various materials he struck out a vast number of bold, free sketches of landscape and cattle, all of which have a most captivating effect to the eye of an artist, or connoisseur of real taste.’[4]

In the present sheet, Gainsborough created perhaps his boldest landscape with cattle using just black chalk on wove paper. Wove was a new method of paper manufacture it was first used in Britain for book printing in the 1770s and it provided a much stronger paper than the traditional laid papers. The chain lines in laid paper show as ridges on the surface and demonstrate that the paper is of varying thickness and therefore inherently weaker. Gainsborough was amongst the first artists to realise the potential of wove ‘unlined’ paper and it enabled him to use stump as a basis for his design. Stump is black chalk that is then smudged with rolled up cardboard or a leather pad. The effect, though similar to grey wash, provides additional texture and more solid tones. In this drawing the basis is stump and then to add detail, Gainsborough has built up the forms with brief but precise dashes of black chalk. It is worth looking at two details to gauge the economy of drawing. The sky consists of just fifteen parallel lines of chalk, while the figure and cattle are finished with little more than five or six strokes of black chalk.

Many of Gainsborough’s surviving drawings from this period all feature a similar group of components, rearranged to form new compositions. To achieve these ‘free sketches’ Gainsborough developed a visual short-hand, particularly in his handling of trees, figures and cattle; the latter often appearing in an almost abstract reduction of shapes and lines. This virtuosic simplicity contributes to the powerful aesthetic of the sheet. Contemporary theories of aesthetic were exploring the potential of both the accidental line and judicious obscurity. Gainsborough deliberately leaves elements of the composition undeveloped, almost unfinished. Edmund Burke writing in his 1757 Philosophical Enquiry into the Origin of Our Ideas of the Sublime, for example, specifically explained the appeal of certain types of landscape painting:

‘in painting a judicious obscurity in some things contributes to the effect of the picture; because the images in paintings are exactly similar to those in nature; and in nature dark, confused, uncertain images have a greater power on the fancy to form grander passions than those have which are more clear and determined.’[5]

In the present sheet, one might point to the mass of lines building up the wooded valley, or the lines of the path itself, which are consciously obscure. This obscurity in turn explains contemporary responses to Gainsborough’s late landscape drawings, particularly the ‘solemnity’ of Edwards.

Our drawing has a most distinguished and complete provenance from Charles Lambert and William Esdaile.  When J.T. Smith visited Esdaile’s house at Clapham he recorded that he was particularly excited by the group of Gainsborough drawings many of which he had seen before ‘in possession of the artist Colonel Hamilton, Mr Nassau, and Mr. Lambert’.[6] It was purchased at the Esdaile sale by a member of the Cavendish family (possibly initially for the family collections at Chatsworth), in whose possession it remained until 1994. Until its sale in 1994 this striking black chalk drawing was one among a group of five sheets probably collected by William Cavendish for Holker Hall in Cumbria. He was later to become the 7th Duke of Devonshire. This is the finest drawing from the group. This remarkable drawing, in exceptional condition, has the strength of design modelled on an old master and the unerring certainty of line that shows Gainsborough at the height of his powers.