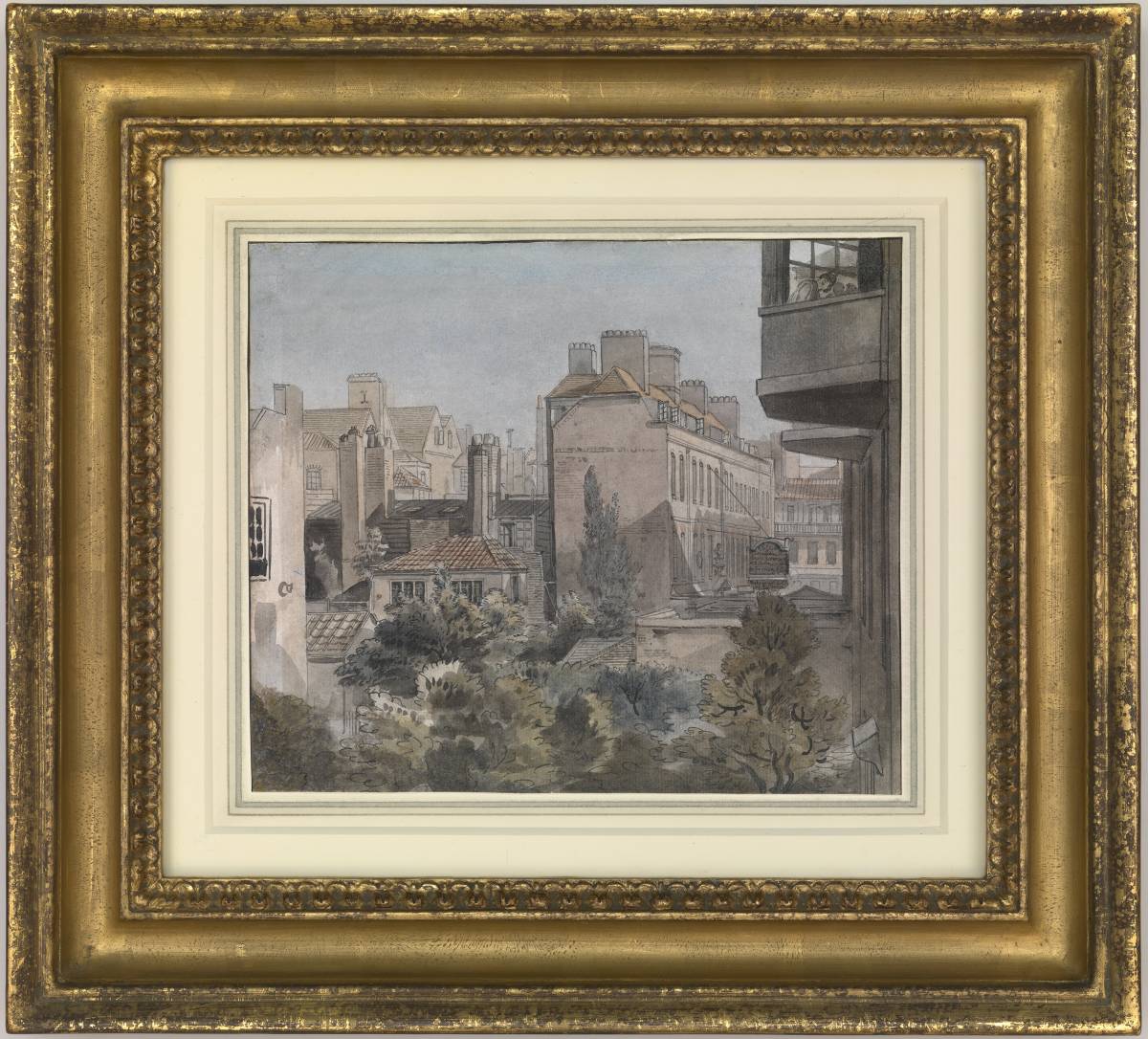 This remarkable watercolour by Thomas Sandby gives an unprecedented view of the heart of London’s artistic quarter in the middle of the eighteenth century. Made from the back window of a house on the west side of St Martin’s Lane, Sandby’s view shows the complex mass of buildings running behind St Martin’s Lane, many of them home to the workshops of prominent artists and craftsman. Identifiable on the right of the image is the building occupied by the bookseller John Noble, Sandby has included his shop sign, a bust of Dryden, placed over his door and a trade sign advertising his circulating library. In the projecting bay-window to the right of the composition, a man can be seen at work giving an air of quiet industry to the composition.

St Martin’s Lane and its surrounding streets and courts housed an enormous number of studios and workshops, along with the eponymous academy which had been established in 1720. Situated in Russell’s Meeting House, a former Presbyterian chapel in St Peter’s Court, the St Martin’s Lane Academy flourished from 1735 under Hogarth’s leadership, offering a place for artists and craftsman to study from life models. Sandby’s view shows a series of well-lit attics and top-lit room, suggesting a warren of creative activity. In the window on the right a man can, perhaps, be seen at work. This building, with the two bay windows, seems to be on the North Eastern corner of St Martin’s Court and St Martin’s Lane, at approximately no.89 St Martin’s Lane. It is possible that this was the house occupied by the engraver John Pine until his death in 1756 and then by his son, the painter Robert Edge Pine. John Pine and Sandby had collaborated on a print of the East prospect of Nottingham published in 1751. The Pine’s house was next door to Slaughter’s the famous coffee house, which by this date played host to scientific meetings attended by amongst others Daniel Solander, Joseph Banks, John Hunter and Captain Cook.

This quiet view shows the sun illuminating a range of buildings – including Noble’s bookshop and circulating library – on the western side of St Martin’s Court. St Martin’s Court was really two streets, one a dog-leg running from Castle Street (now Charing Cross Road) which then intersected an alley which ran all the way from St Martin’s Lane through to Castle Street. John Noble’s circulating library was one of only four in London at this date, when hard up, James Boswell recorded in his Journal that he ‘recollected that I had left a guinea of security at Noble’s circulating Library. I went & told him that he should put confidence in me so got it back. This was a most welcome guest to my pocket & communicated spirit to my heart. But, alas, of short duration was this state of opulence.’[1] Fascinatingly John Noble is listed as the retailer of Joshua Kirby’s Dr Brook Taylor’s Method of Perspective Made Easy a book published in 1754 with a frontispiece by William Hogarth, which pre-empted a publication on perspective by Thomas Sandby himself. It has been suggested that it was the anticipated appearance of Kirby’s book which partly explains Paul Sandby’s vicious satirical attacks on Hogarth which were published in 1753.[2]

Thomas Sandby was a Nottingham born architect and draughtsman, the elder brother of the landscape painter Paul Sandby, he was an acute observer of London producing a number of spectacular topographical views of city streets. In 1764 Thomas Sandby became steward to William Augustus, Duke of Cumberland and also acted as deputy ranger of Windsor Great Park. Despite being based at Windsor, Sandby remained active in the artistic world of London; he served on the committee of the newly formed Society of Artists in 1759, and in 1768 was a founder member of the Royal Academy, of which he was appointed the first professor of architecture. He would therefore have known the area around St Martin’s Lane intimately.

Sandby’s watercolour is somewhat different in character from his depiction of the arches of The Piazza in Covent Garden now in the British Museum. The loosely handled washes give this topographical view a more informal quality. The lack of detail in the handling of the foliage and the dramatic shadows suggest Sandby was making a personal record of a familiar view, rather than preparing a finished drawing to be engraved. As such, this beautifully preserved watercolour, offers a strikingly original view of a famous, but rarely depicted corner of eighteenth-century London. 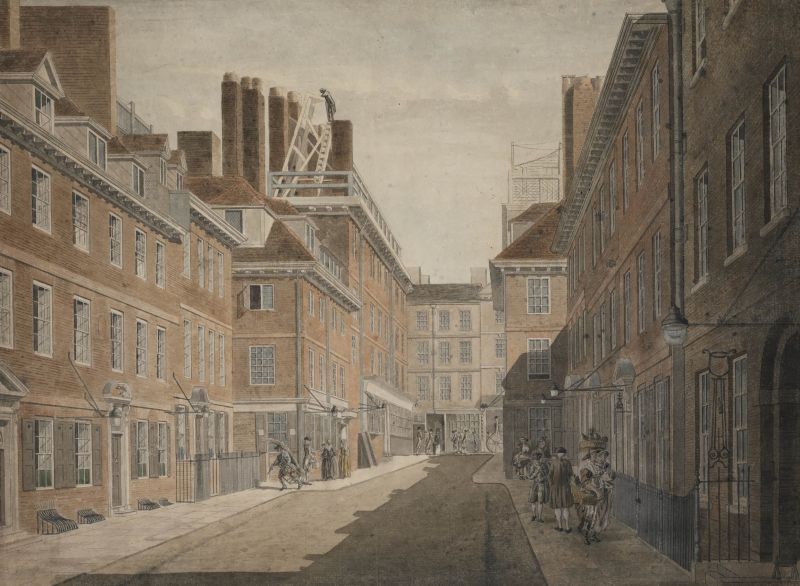