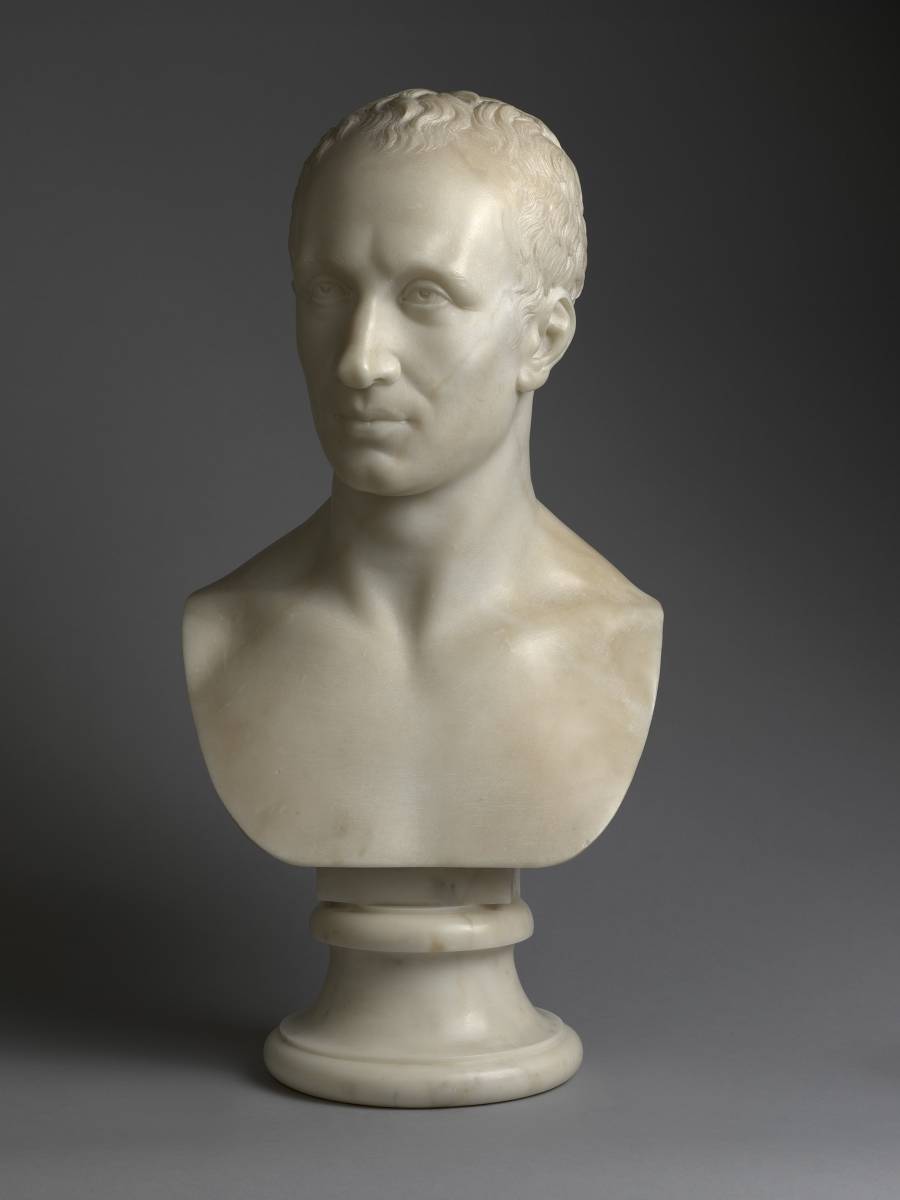 This striking, beautifully carved bust is signed and dated by Antonio d’Este 1810, the year that he was elected a member of the Accademia di San Luca in Rome. D’Este was Antonio Canova’s most important collaborator and greatest disciple, devoting the latter half of his career to managing Canova’s workshop.

Like Canova, d’Este’s career combined antiquarianism in the form of the restoration of antiquities with an innovative approach to neo-classicism: d’Este produced a series of antique-inspired sculptures that consciously developed Canova’s aesthetic. D’Este’s work with antiquities saw him manufacture several spectacular groups giving neo-classical features to the remains of classical marbles; in this way he was the heir to the work of Bartolomeo Cavaceppi. But whereas Cavaceppi operated solely as a commercial restorer, d’Este became Conservatore of the Vatican museums and in 1815 director, as well as a highly respected sculptor in his own right. This wonderfully preserved bust demonstrates d’Este’s powers as a portraitist and his sensitive adaptation of antique forms for modern portraiture.

D’Este was born in Venice where he trained in the studio of Giuseppe Bernardi, known as Il Torretti. It was in Bernardi’s studio that he met the younger Antonio Canova, beginning a friendship and professional collaboration that endured for the rest of their lives. In October 1773 d’Este accompanied Canova to Possagno, where he assisted in the creation of Canova’s first great sculptural group, his statue of Eurydice now in the Museo Correr, Venice. D’Este arrived in Rome in 1775 where he entered the studio of Ferdinando Lisandroni; at about the same date he is recorded working with Massiliamo Laboureur and his fellow Venetian Antonio Canova.[1] In 1787 d’Este set-up his own studio near the Church of S. Ignazio, next to palazzo Gabrielli-Borromeo. D’Este became a major restorer and dealer in antiquities selling sculpture to some of the most important collectors of the day including Thomas Hope and his brothers and Henry Blundell. D’Este sold Blundell marbles from a range of sources, from both the Villa Mattei and villa d’Este collections as well as from contemporary excavations. These heavily restored antiques were joined by several pieces entirely of d’Este’s own invention, the bust of Claudius according to Blundell ‘found in some ruins near the Palatine hill’ was manufactured along with its pair, a bust of Domitian, in the workshop at San Ignazio. Visconti, in his third volume dedicated to the Pio-Clementino, mentions the presence of a Statue of Anchyrrhoe in the studio of the ‘eminent and accurate sculptors’ which they sold to Blundell.[2] In partnership with Giovanni Pierantoni, d’Este supplied several important sculptures to Thomas and Henry Hope, including the Statue of Antinous now in the Lady Lever Art Gallery, Port Sunlight. from 1783 d’Este worked at the Vatican Museums, restoring amongst other antiquities the Mattei Faun for 2.500 scudi and the L’Apollo con Giacintoand in 1805 he completed the arrangement of the Museo Chiaramonti.[3]

In 1790, at Canova’s suggestion, d’Este produced a spectacular copy of the Apollo Belvedere for Marcello Bacciarelli now in the Lazieski Palace in Warsaw. Thomas Hope commissioned a grand sculpture of an eagle from d’Este which was prominently displayed in both Duchess Street and latterly at The Deepdene. D’Este’s professional career became increasingly subordinate to that of Canova for whom he acted as studio manager, collaborator and amanuensis. As was noted in d’Este’s biography of Canova, d’Este assumed responsibility for running Canova’s studio in Rome: ‘giacchè non più si trattava di semplice direzione e consiglio, sibbene dovea prestarvisi a tutt’uomo, e negligentare i propri interessi.’[4] D’Este visited Naples in 1795 to direct the installation of Canova’s Venus and Adonis in a garden pavilioned constructed by its patron Francesco Maria Berio, Marchese di Salza. D’Este acted as Canova’s agent brokering the commission from Prince Onorato Gaetani d’Aragona for the Hercules and Lichas now in the Galleria Nazionale d’Arte Moderna, Rome. Among other tasks, he had to spend time in Carrara assessing and selecting the marble blocks that Canova was to carve back in Rome.

In 1799 d’Este gave up his studio near S. Ignazio using instead ‘un piccolo locale nel vicolo sterrato dell’Orsoline’ working principally with Canova in his Roman workshop. As a result d’Este is principally known as a portraitist; indeed, he himself wrote in 1807 to Pier Antonio Meneghelli claiming that he was pursuing the ‘way of portraiture’ considering it: ‘the least difficult part of art, which is demonstrated by all ages, being the first born and the last to die.’ D’Este made busts of a range of important international sitters from artistic friends such as Giovanni Volpato to celebrated statesman such as Sir John Acton, Prime Minister of Naples under King Ferdinand IV.[5] In 1795 he had executed two busts of Canova, one of which, in the form of a herm was engraved by Pietro Fontana as the frontispiece to Faustino Tadini’s Le sculture e le pitture di Antonio Canova. The bust treats Canova in a severely classical manner, d’Este prominently signed the bust on the side of the herm adding a deliberately archaicising inscription: ‘A. D. ESTE VENET. AMICO F. ROMA. MDCCXCV’. The inscription demonstrates d’Este’s knowledge of antique Roman script and points to his own habit of embellishing the antiquities he restored with false inscriptions. Several of the cinerary urns d’Este supplied to Henry Blundell from the Mattei collection, for example, were enhanced in the same convincingly antique script with text borrowed from published antiquities.[6] But what makes d’Este’s bust particularly telling is his addition of a small profile self-portrait carved in relief next to his signature. On the basis of this profile, the present bust has also been convincingly identified as a self-portrait of d’Este.

The present bust is a confident essay in Canova’s portrait style. Carved from outstanding statuary marble, the surface, unlike d’Este’s herm of Canova is preserved in spectacular condition. The verso is inscribed in d’Este’s characteristic, archaising script: ANTONIUS ∙ D ESTE E ∙ ROMAE ∙ ANN ∙ MDCCCX’, making the bust fifteen years later in date. The portrait consequently shows an older man. The grand, classical torso supported on a simple stepped socle recalls the monumental heads Canova was producing around 1810, particularly his monumental treatment of Napoleon in the colossal bust at Chatsworth. D’Este shows the head similarly turned to the right and applies a similar degree of classical idealisation, encapsulated by the straight nose, muscular torso and purposeful expression. But D’Este’s interest in the antique was perhaps more actual than ideal and as a restorer his knowledge more practically based than Canova’s, a fact suggested by his careful carving of the hair, which acknowledges the sinuous relief of 1st century Roman portrait busts. This bust was made in 1810, the year d’Este was elected a member of the prestigious Accademia di San Luca in Rome and may have been a commemoration of his election. Physiologically the bust can be compared to the portrait of d’Este by Andrea Pozzi at the Accademia. The strong, flat-topped nose, dimpled chin and high forehead are all the same, whilst the terracotta bust in the background could even be read as a depiction of a preparatory model of our bust. In its commanding synthesis of Canova’s monumental vocabulary and interest in antique models, this penetrating portrait perfectly captures d’Este’s role as one of the great figures of early nineteenth-century sculpture. 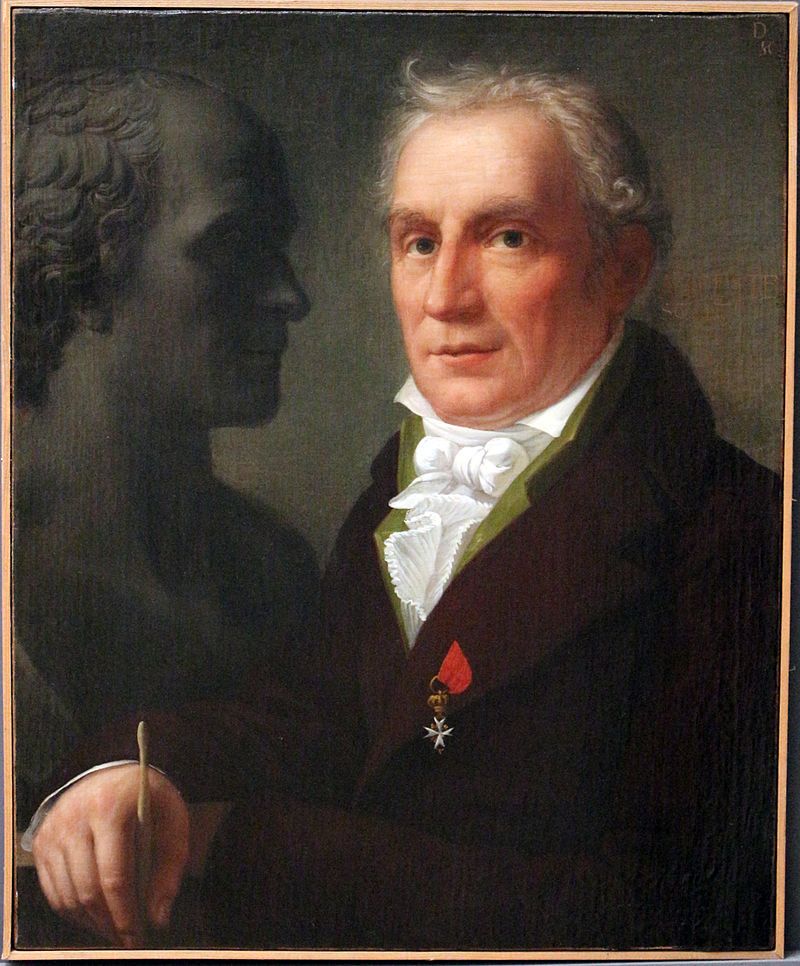