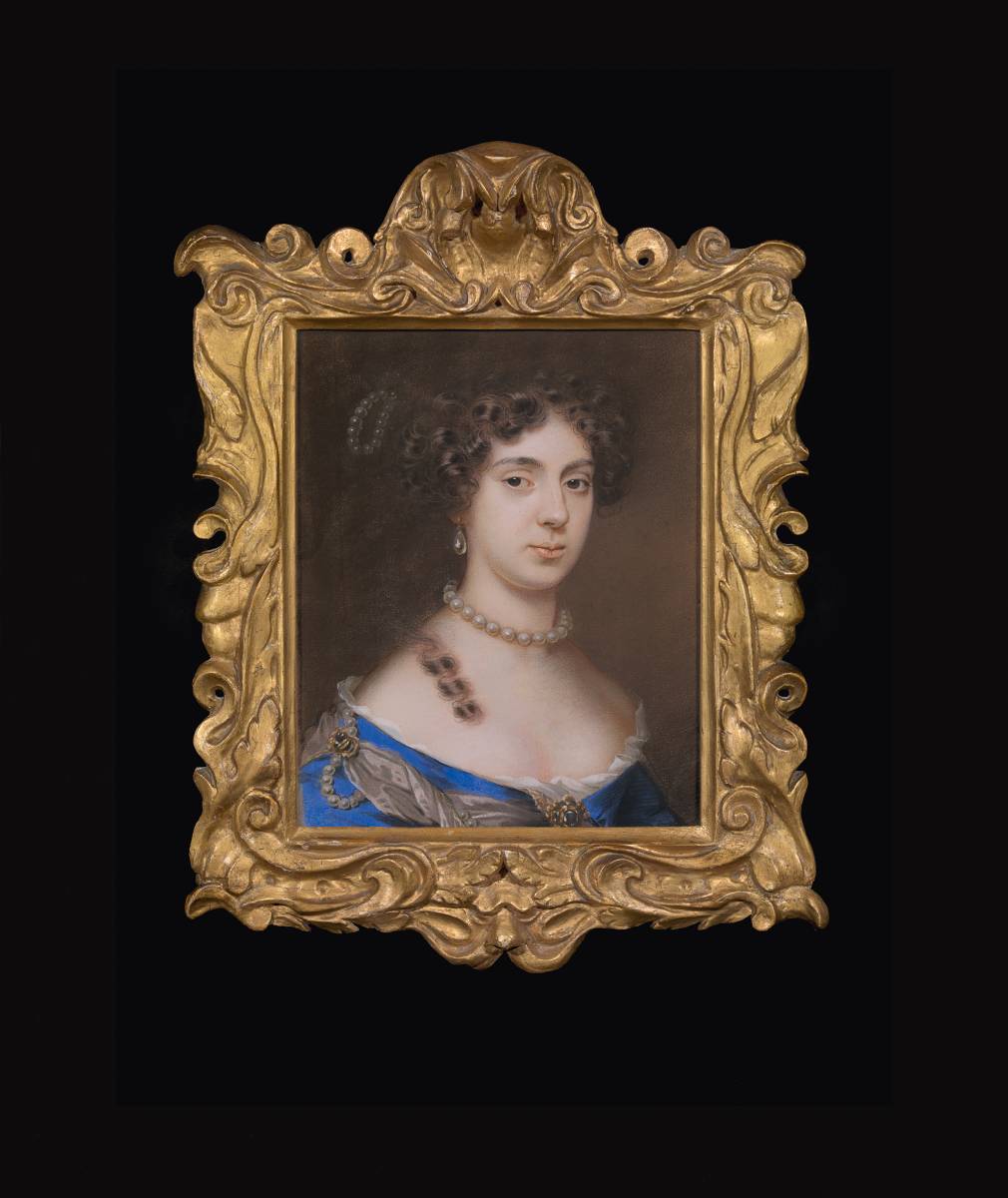 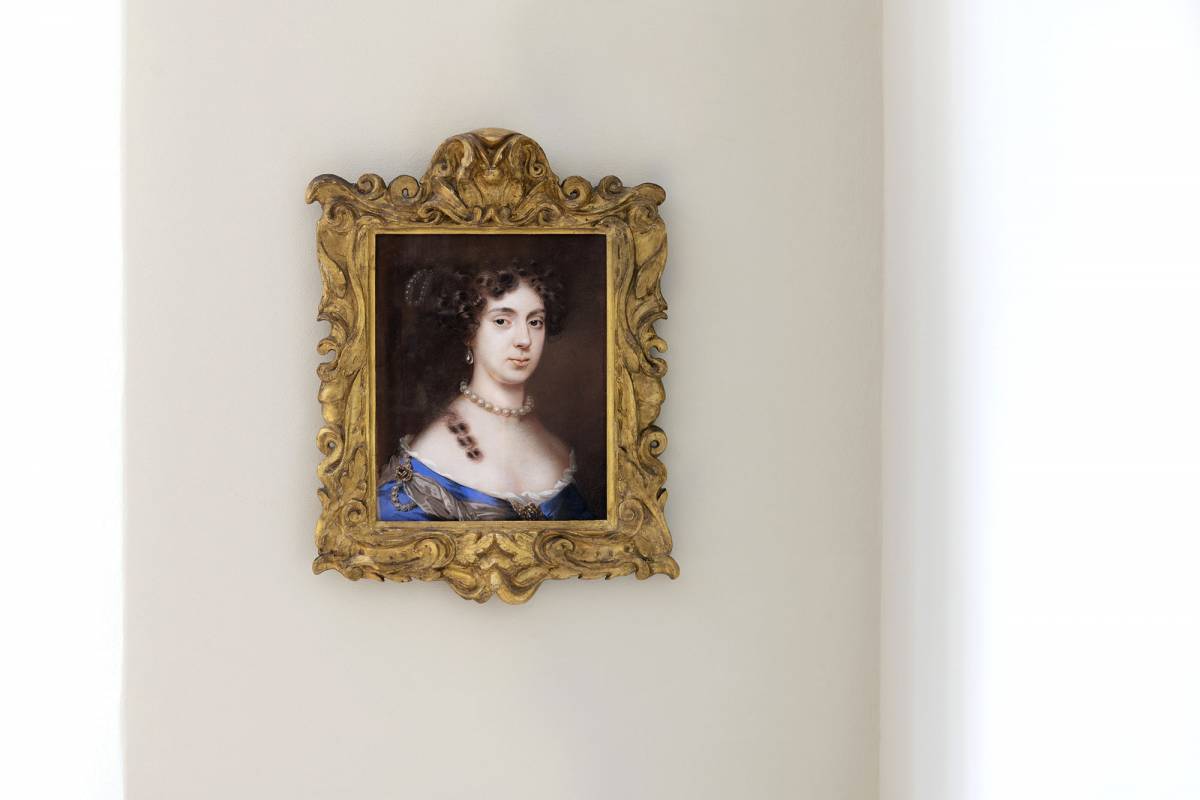 This dazzling Restoration portrait demonstrates Edmund Ashfield’s exceptional virtuosity as a pastellist. Preserved in immaculate condition and housed in its original Sunderland-type frame this portrait belongs to a small but significant group of pastel portraits Ashfield completed in the 1670s. Bainbrigg Buckeridge described Ashfield as a ‘gentleman well descended’ in his ‘Essay Towards and English Scholl of Painters’ of 1706 and the evidence is that Ashfield was born into a gentry family.[1] His grandfather, Sir Edmond Ashfield of Chesham, was the dedicatee of Henry Peacham’s treatise on drawing, Graphice, published in 1634. Several early commentators noted Ashfield’s innovative use of pastel and Ashfield is credited with transforming the medium, producing a sequence of luminous portraits which conveyed a strikingly new enamelled effect. Ashfield’s sitters included some of the most significant figures in Restoration London from John Maitland, 1st Duke of Lauderdale secretary for Scottish affairs to Charles II’s daughter, Charlotte Jemima FitzRoy. This exquisite portrait is signed and dated 1674 and depicts Amphilis Tichborne at the time of her marriage to Richard Broughton.

According to Buckeridge, Ashfield trained with the portrait painter John Michael Wright. Whilst Ashfield’s work betrays little stylistic affinity with the work of Wright, both men appear to have practiced as Catholics. As Neil Jeffares has pointed out, Ashfield’s early career was supported by a series of prominent Royalist – and Catholic – families including Amphilis Broughton, whose father, Sir Henry Tichborne had successfully defended Drogheda during a four-month siege in the Irish Rebellion and had, in consequence been appointed Lord Justice of Ireland by Charles I.[2] Whilst there is evidence Ashfield worked in oil, he is most celebrated for his innovative use of pastel.

The antiquary Thomas Hearne praised Ashfield in 1709 as having ‘a Genius for painting, especially for Craons’, while Buckeridge noted that he was the first to increase the number and variety of tints in pastel, using them to paint in imitation of oils ‘with equal force and beauty.’[3] Most of his known works date from between 1673 and 1676, and according to Buckeridge he practiced with ‘deserved applause’, charging as much as £10 a head for his portraits.

Ashfield seems to have taught the Irish portrait painter Garret Morphy and the pastellist Edward Luttrell. Luttrell explained in his Epitome of Painting of 1683 how Ashfield freed pastel from its role as a preparatory medium for the making of engraved portraits and ‘brought it to a perfection’, so that it came to be valued in its own right. Luttrell notes that before Ashfield, pastellists worked on grey paper with two or three colours as well as red or black chalk, and used the uncovered paper to indicate middle tonal range. At the start of his career, Ashfield used gouache in some draperies but turned against this technique to work in pure pastel. Luttrell concludes that ‘those admirable pictures… of the King and most to the nobility of this Land’ by Ashfield will endure: ‘as Monuments of his Ingenuity.’ The small group of pastel portraits by Ashfield which survive testify to his exceptional ability with the medium. This portrait of Amphilis Tichborne is executed on buff coloured paper and precisely worked in a complex palette of pastels. Ashfield has revelled in applying a subtle range of flesh tones to create a porcelain smoothness to the sitters complexion, small traces of gouache have been added to the costume to achieve the vivid, rich blue of the dress, whilst touches of white highlight have been added to the pearls, jewels and sitter’s lips to achieve a dazzling luminosity. Ashfield has used sharpened pastels to delineate the sitter’s eyebrows and complex coiffure, the single ringlet falling over the sitter’s shoulder is beautifully delineated and seems to have been a motif he enjoyed, as it appears in other of Ashfield’s works.

Executed on a diminutive scale and revelling in the iridescent quality imparted by the pastels fresh, refractive surface and amplified by being housed in a carved giltwood frame and seen under glass, it is clear Ashfield was appealing to the late seventeenth century love of luxury. Housed in an intimate, domestic space, this precious portrait exemplified contemporary taste for precious objects and may well have been housed in a cabinet of miniatures. Neil Jeffares has suggested that Ashfield may have been related to the Mrs Mary Ashfield who is recorded in 1671 supplying Sunderland-type frames to the Guildhall. Perhaps Ashfield’s wife, Mary Ashfield is extraordinary for being recorded as a frame supplier in her own right.[4] It has been suggested that Mary Ashfield provided the Sunderland frame on the current portrait, which is identical in profile to one on Ashfield’s portrait of Sir James Oxenden. The Ashfields were, therefore, able to supply an exceptional luxury product for the Restoration art market of which this spectacular portrait is the finest surviving example. 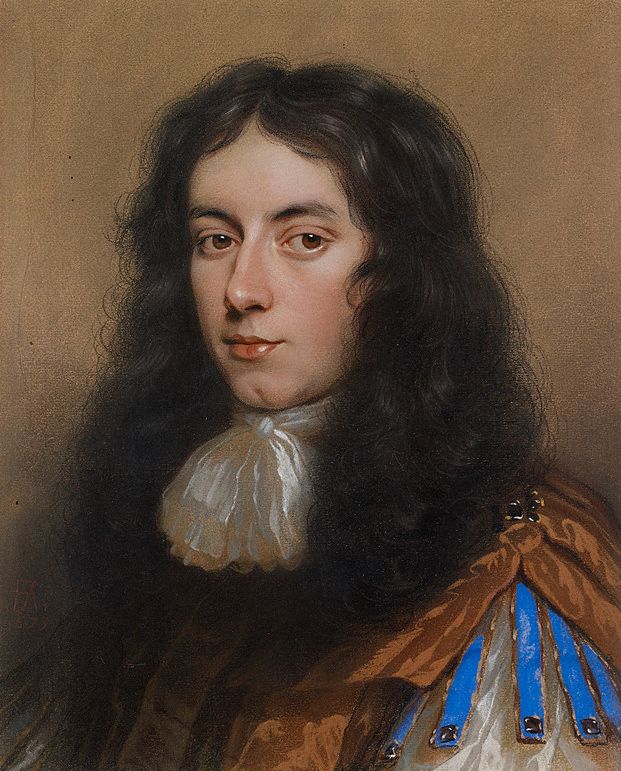