This grandly worked drawing was made by John Hamilton Mortimer in preparation for his celebrated series of engravings depicting twelve characters from Shakespeare which were exhibited at the Society of Artists in 1775. This was the major graphic project of Mortimer’s life; he enlisted the celebrated actor David Garrick to manage the subscription and dedicated the plates to the new President of the Royal Academy, Sir Joshua Reynolds.

The engravings themselves represented a major shift in the visual treatment of Shakespeare: rather than showing dramatic scenes from plays, Mortimer created evocative heads that capture the characters and in one case, the Poet from A Midsummer Night’s Dream, the personification of imagery in the text, rather than an actual member of the cast. Enormously popular following their publication in 1776, the prints were reissued by Thomas Palser in 1812 and 1816, but only six of the original drawings were identified by John Sunderland, making the rediscovery of the present sheet hugely significant. Preserved in outstanding condition, this drawing offers remarkable evidence for the process Mortimer used to make his etchings as well as underlining his spectacularly assured draughtsmanship.

Mortimer’s twelve drawings were exhibited together at the Society of Artists in 1775 and represent the last great artistic project of his life. Articled initially to the portrait painter Thomas Hudson, Mortimer left his apprenticeship early to work with the radical history painter and portraitist Robert Edge Pine. Trained as a portraitist, Mortimer had ambitions to pursue history painting. In 1759 the Society for the Encouragement of Arts, Manufactures, and Commerce began to offer premiums for English (and later British) history painting. Mortimer won second prize in 1763 and in 1764 he won the first prize for St Paul Preaching to the Ancient Britons now in the Guildhall, High Wycombe, Buckinghamshire. Mortimer continued to explore subjects from British history, completing a remarkable sequence of proto-romantic machines which he exhibited at the Society of Artists, an organisation to which he was devoted. Mortimer was active in setting up the Society's academy of drawing and painting in Maiden Lane, Covent Garden, in 1769. He was made vice-president in 1770 and was president in 1774–5.

In the early 1770s Mortimer turned to more disturbing subject matter, such as scenes of witchcraft, monsters, and, in particular, banditti or bandit scenes, which came to be considered his speciality. Influenced by the etchings of the seventeenth-century artist Salvator Rosa, Mortimer's banditti subjects, often in narrative series, were frequently drawn and etched, either by himself or by engravers such as Robert Blyth, the drawings being exhibited as finished works at the Society of Artists. His most successful graphic project were the twelve drawings he made of heads from Shakespeare and the etchings he published after the drawings.

Thanks to surviving correspondence that Mortimer was keen to etch and publish in a limited edition the drawings himself. For this he enlisted the help of David Garrick. In a letter to Mrs Montagu of 27 March 1775, Garrick wrote:

‘the next favour I had to solicit was Your name, which I more Glory in than if Possesd. & to be added to ye. most noble list I have got for a very ingenious Man who has undertaken 6 Etchings from the principal Characters of Shakespeare. I have sent you a Sample of the work, which I must beg you to return to day or tomorrow – without your permission I have plac’d you at the head of my List, & Everybody agrees to the propriety of such a Leader. Should you meet with any choice Spirits, whose names may be easily got, they will not discredit themselves, & do great Service to a most ingenious man.’[1]

This places Mortimer’s project importantly at the heart of a major reassessment of Shakespeare’s works around 1770. Elizabeth Montagu had published An Essay on the Writings and Genius of Shakespear in 1769. This work was the result of several years of study of both drama and criticism. Full of nationalistic pride, the Essay defended Shakespeare against the attacks of foreign critics such as Voltaire, comparing him with classical Greek and more modern French dramatists, none of whom had all of his virtues. Another particular target was Samuel Johnson, whose Preface to Shakespeare had appeared in 1765. Montagu argued that 'he should have said more or have said nothing'; in concentrating on the historical context in which the plays were written and their subsequent treatment by editors and critics, he had failed to engage with the texts of Shakespeare's plays and to use them to argue for Shakespeare's superiority as a dramatist. The Essay sought to remedy what Montagu argued was Johnson's neglect of Shakespeare's 'dramatic genius'. Mortimer had already fired a number of salvos in this debate, in 1765 Mortimer had drawn the frontispiece for Evan Lloyd’s satirical poem The Reviewers’ Cave which specifically attacked both Samuel Johnson and William Warburton’s edition of Shakespeare. In 1776 Mortimer produced a drawing of Literary Characters Assembled around the Medallion of Shakespeare for John Kenyon which again satirised Johnson. 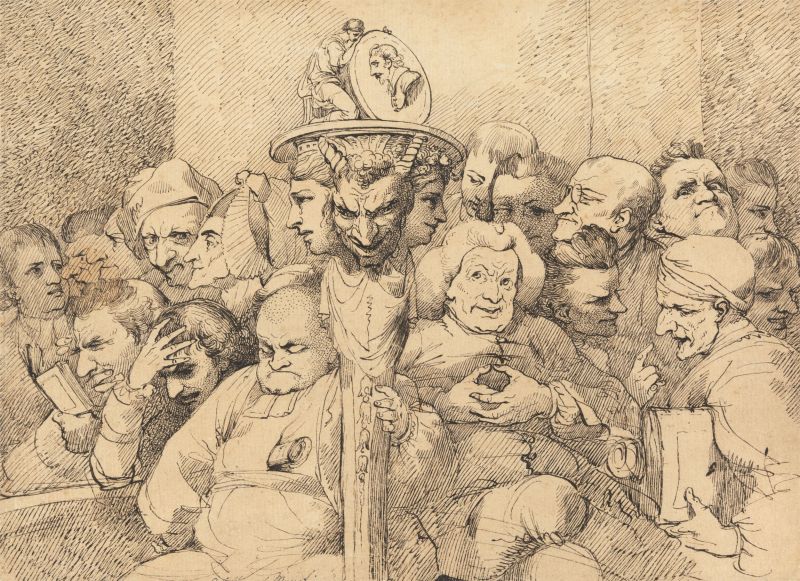 It was in their conception, as John Sunderland observed, that Mortimer’s Shakespearean Heads are a quite original contribution to the illustration of Shakespeare in the eighteenth century, being distant from both book illustrations of the period and from theatrical conversation pieces.[2] The drawings do not show contemporary actors en role in Shakespeare’s plays, but Mortimer’s own conception of the character derived from the text of the play. Thus, this penetrating drawing depicts the character of Bardolph, a soldier and thief who appears as a member of Falstaff’s retinue in Henry IV parts I and II, The Merry Wives of Windsor and Henry V, famed for his bulbous, red nose. Shakespeare consistently cites Bardolph’s physiognomic excesses as evidence of his ferocity, dissolution and questionable moral stance. Prince Hal draws attention to his ‘blush’d extempore’ adding that his has ‘fire and sword on [his] side’, Bardolph himself points out that his face compares with ‘meteors…[and] exhalations’. Falstaff in several sustained passages continues the fire-related allusions christening Bardolph ‘the Knight of the Burning Lamp’, whilst another character describes him as an ‘arrant malmsey-nose knave.’ Mortimer attempts to capture the complexity of Bardolph’s character, presenting him as a part dissolute, drink sozzled member of Falstaff’s retinue and brave, loyal soldier.

Mortimer's delicate but taut draughtsmanship emphasises Bardolph’s bulbous nose, whilst showing Bardolph’s dextrous hand clasping his pike. Rendered with a mass of fine lines and hatched shading the drawing very deliberately anticipates the etched lines of the print. The technique is particularly bold and demonstrates Mortimer’s awareness of the drawings of seventeenth-century Italian painters such as Guercino and Salvator Rosa. The grotesque quality of Bardolph’s features particularly recall the brown ink and wash caricatures by Guercino, several of which were published by Arthur Pond in the 1740s. Guercino was master of using the profile format, derived from antiquity, to add to the comic effect of his grotesque heads, something Mortimer captures in his depiction of Bardolph. Whilst the drawing appears close to the etching, there are a number of significant differences which raises the interesting question of the relationship between the exhibited sheets and the finished plates. The sheet is preserved in exceptional condition and unusually survives on an eighteenth-century mount.