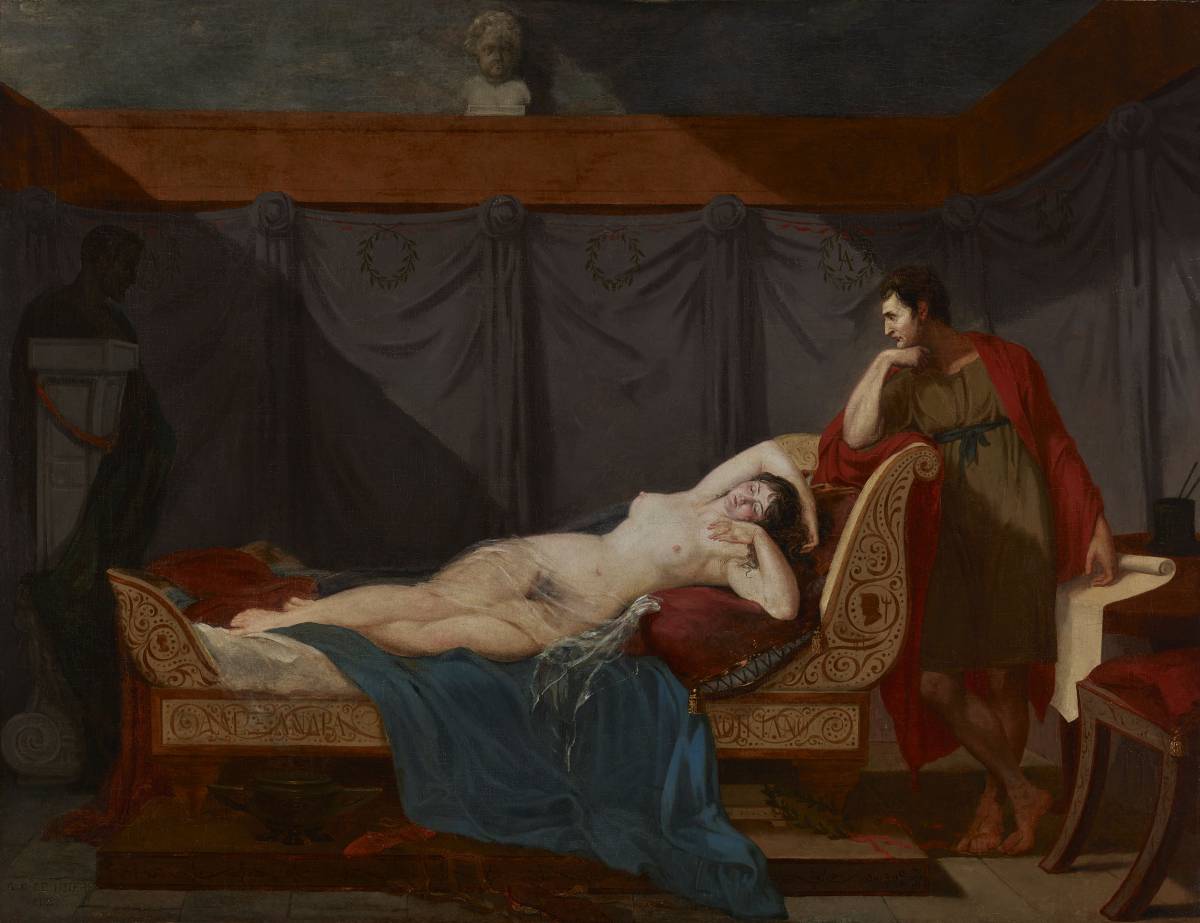 This exceptional image of Napoleon’s brother, Lucien Bonaparte, Prince of Canino and his mistress Alexandrine de Bleschamp is one of the most unexpectedly intimate and erotically charged portraits painted in Revolutionary France.

It was painted in around 1802 by Guillaume Lethière, Lucien Bonaparte’s protégé, who had been born on the Caribbean Island of Guadeloupe, the son of a white government official and a freed black slave. Trained in Rouen, Paris and Rome, Lethière absorbed influences from a range of artists from Grabriel François Doyen to Jacques Louis David and his work is correspondingly considered to sit at the heart of a complex international network of neoclassicism. At first sight, Lethière has created a composition that appears to emanate from the modish repertoire of David and his followers: the frieze-like composition appears to show a figure from Roman literature contemplating the nude form of Venus. The details of the interior resemble a fantasy of Republic French neoclassicism: a fabric lined chamber furnished with an antique couch, busts, incense burner and chair. But Lethière’s painting contains a series of clues which unlock its startling iconography: he adds the names of Alexandrine and Lucien, in Greek to the couch and their initials to the wall hangings. Lethière accompanied Lucien on his diplomatic mission to Spain in 1800 where they were afforded a rare sight of Francisco Goya’s exceptional depiction of a modern naked woman, the Nude Maja, which then belonged to Spain’s Prime Minister Manuel de Godoy. Lethière’s depiction of Lucien and his mistress painted in 1802 is therefore an exceptional contemporary response to Goya’s bold image. But unlike Goya’s anonymous model, here Lethière shows Alexandrine Jouberthon, naked, save for a wisp of diaphanous drapery, a conceit which serves to accentuate her pubic hair. The Roman figure contemplating her nakedness, shown in severe profile, is Lucien himself and the smiling bust high above them is recognisable as a self-portrait of Lethière.

Lethière had travelled to France at the age of fourteen to train as a painter; initially at the Academy in Rouen and in the studio of Jean Baptiste Descamps, Lethière moved to Paris and enrolled at the Académie Royale, studying under Grabriel François Doyen and in July 1782 he won a first-class medal at the Académie. Lethière competed for the Prix de Rome in 1784, 1785 and 1786 and despite losing, was awarded a Roman pension remaining in Italy until 1791. Lethière had an apparently conventional career achieving success under successive regimes; being made director of the French Academy in Rome from 1807 until 1816, he was appointed a member of the Légion d’honneur and Institut de France in 1818 and professor of the École des Beaux-Arts in 1819. But there is considerable evidence to suggest that this success came despite contemporary prejudice about his racial origins. Lethière was born in the French colony of Guadeloupe, the son of a French royal official Pierre Guillon and a black slave named Marie-Françoise ‘dite’ Pepayë. His conflicted origins are in evidence in his name Lethière – or sometimes Le Thiers – refers to his status as ‘the third born’ he was only acknowledged by his father and permitted to use the family name of Guillon aged forty. He was considered by contemporaries to be mixed-race. As Darcy Grimaldo Grigsby has observed, Lethière was identified as: ‘a ‘man of color’ or a sang-mêlé (mixed-blood) and also as a colonial or creole: a man, in other words, marked by racial difference as well as by birth in the colonies.’[1] Like others with colonial backgrounds in late eighteenth-century Paris, Lethière was an enthusiastic revolutionary: he visited David in prison, and painted in 1799 a remarkable revolutionary canvas The Fatherland in Danger. Contemporary sources call him ‘le mulâtre’ (the mulatto) and he was nicknamed ‘l’Américain’ by fellow artists, a name that acknowledged both his republicanism and his ethnicity, the Caribbean being geographically situated on the continent of America.

Lethière’s political fervour recommended him to the young Lucien Bonaparte, who, had been instrumental in overthrowing the Directory and having his elder brother, Napoleon, elected First Consul. Made Minister of the Interior and from 1800 ambassador to the court of Charles IV of Spain, Lethière became Lucien’s art advisor travelling with him to Madrid. In Spain he helped Lucien form his exceptional group of old masters, including pursuing the purchase of a collection of exceptional Venetian paintings which had belonged to Sir Richard Worsley, British Resident in Venice which had been captured on their way back to Britain.[2] Despite diplomatic success in Madrid, relations between Lucien and Napoleon cooled and Lucien took the decision in 1802 to retire from public life. The same year he met the beautiful Alexandrine de Bleschamp Jouberthon at a house party hosted by the historian Alexandre de Laborde at Méréville near Paris. According to newly discovered manuscript drafts of Lucien’s memoirs, he fell in love with her on sight. News of the death of Alexandrine’s husband on the Caribbean island of Saint-Domingue (modern-day Haiti) enabled him to declare his love. In part because of Napoleon’s dynastic ambitions for Lucien, they decided to keep their affair secret. Lucien acquired a splendid Hôtel particulier in Paris, the Hôtel de Brienne, on the Place du Corps Lègislatif (now the home of the Ministry of Defence) installing Alexandrine in an adjacent building. Lucien had a secret tunnel constructed to join their apartments which he called the ‘Souterrain conjugal’, it connected the rooms which housed Lucien’s growing collection of paintings with Alexandrine’s private rooms.

Lethière’s painting was almost certainly painted for this intimate space at the Hôtel de Brienne. We know that another work by Lethière was hanging in the public rooms of Hôtel de Brienne, now lost, its appearance is known from an engraving. Entitled Sleeping Venus, it showed a naked female figure in an identical pose to Alexandrine in our portrait, but the composition is more overtly mythological, without the erotic presence of a male viewer. Noga Arikha and Marcello Simonetta have suggested that this was the equivalent of Godoy’s Clothed Maja the public facing work, whilst the present picture remained concealed, just as Godoy kept the Naked Maja behind closed doors. Our portrait is an extraordinarily bold composition. The naked Alexandrine is shown reclining on a couch, the conceit indebted to Goya’s Nude Maja, whilst the pose is derived from the Roman sculpture of the Sleeping Ariadne in the Vatican. Lethière covers the couch on which Alexandrine sleeps with arabesque designs and inscribed, in Greek, with the lovers’ names. A further detail showing a man’s head, in profile, with a trident has been suggested, by Arikha and Simonetta, to allude to an episode between Lucien and Napoleon which took place shortly before Lucien began his affair. Lucien and his elder brother Joseph were arguing with the First Consul, whilst he was in his bath. In a moment of anger, Napoleon shifted position and drenched Joseph Bonaparte, Lucien retorting with lines from the Aeneid about Neptune unleashing the fury of the ocean’s waters against the winds. Arikha and Simonetta have further identified the bust on the left of the painting as depicting Napoleon, whilst the bust on the ledge high above the composition is convincingly identified as a self-portrait of Lethière, his distinctive, frizzy hair identifiable from other known portraits.

Shortly after this portrait was completed Lucien and Alexandrine, by then pregnant with their first child, the eminent American naturalist, Charles, went into self-imposed exile in Rome. In Italy Lucien devoted his life to art and archaeology becoming a hugely important figure in the excavation, restoration and publication of Greek vases (Lucien uncovered over 2000 from the Etruscan town of Vulci). The later history of this painting is unclear, it was not included in the sale of Lucien’s collection in London in 1816 and remained largely unknown to scholars. It is only very recently that the importance of the painting has been appreciated with its inclusion in the major exhibition at Ajaccio Lucien Bonapatre: un Homme Libre in 2010 and the publication by Arikha and Simonetta of a book on Lucien and Alexandrine.