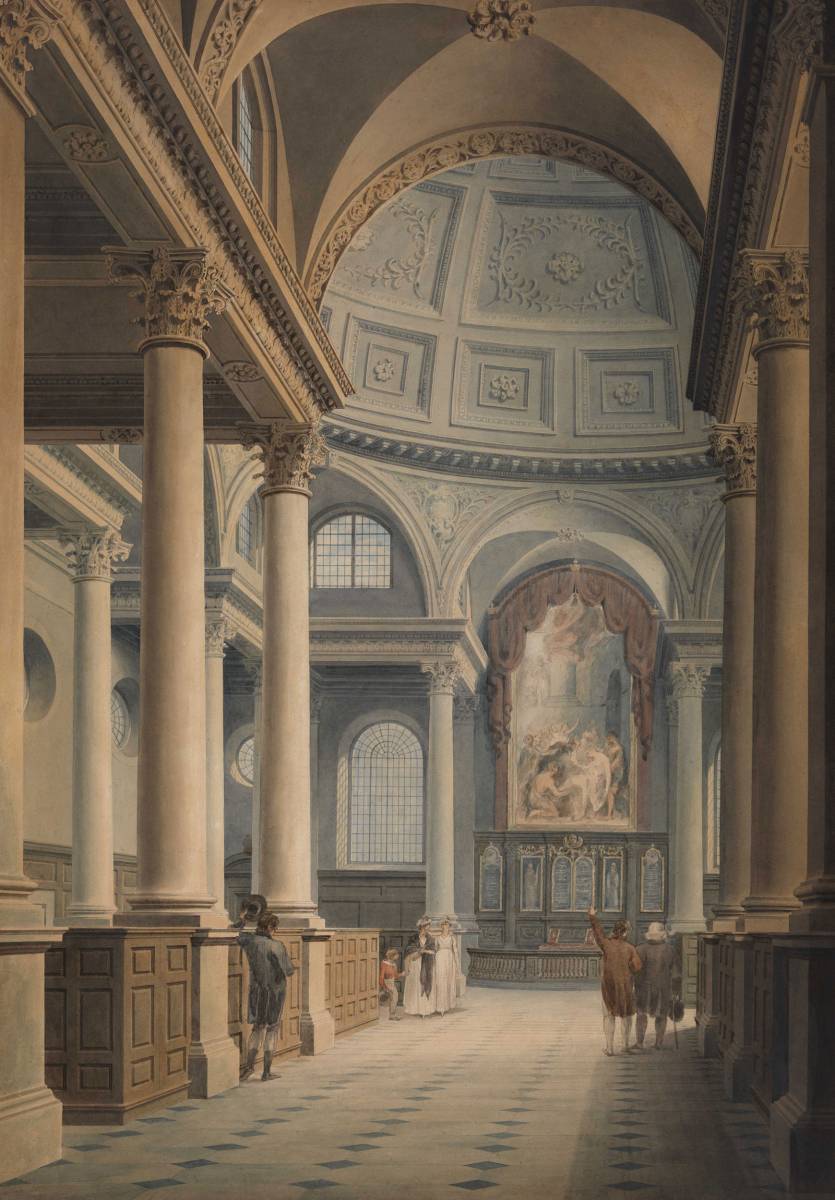 The Walbrook was a stream running across London from the City Wall near Moorfields to the Thames and there has been a place of worship on the present site since the Romans built a temple to Mithras. The Great Fire of London in 1666 destroyed the 15th century church, and the building recorded in the present watercolour, was designed by Sir Christopher Wren and built between 1672 and 1680. Reflecting the theology of his day, Wren designed and built auditory churches – where no member of the congregation would be more than thirty feet from the proceedings.  St Stephen’s is regarded as one of his finest  church interiors, with the sixty-three foot high dome centred over a square of twelve columns  based on his original design for St Paul’s.

Malton shows elegantly dressed figures strolling in the nave.  Some of the visitors are admiring Benjamin West's altarpiece Devout men taking the body of St. Stephen. West’s painting was exhibited at the Royal Academy in 1776 (96), before being installed in the church later in the year.  The painting depicts the aftermath of the first Christian martyrdom as described in the Acts of the Apostles, rather than the stoning of St Stephen or his death, although versions of both subjects are recorded in the early lists of West’s works.  West accepted the modest sum of £150 for the commission, regarding the painting rather as a gift, which would lead to further commissions.  Indeed, as a result of the success of the picture at the Royal Academy, West was asked to paint altarpieces for Trinity College, Cambridge, and Winchester Cathedral.  The shape of the canvas was dictated by the size of the main east window of St Stephen’s, where the painting was originally hung.  In 1852 the painting was moved to its present position on the north wall, where the doorway with portico intended by Wren, was blocked up because of the stench of the Stocks Market, the principal market at the time.

Thomas Malton was the son of Thomas Malton Snr (1726-1801) an architectural theoretician, draughtsman and writer on geometry.  He studied architecture for three years under James Gandon before entering the Royal Academy Schools in 1773, winning silver and gold medals for architecture.  He was in Bath in 1780 and briefly joined his father who had moved to Dublin in 1785.  Between 1773 and 1803 Malton exhibited 128 works at the Royal Academy including designs and perspective views of streets and buildings in London, Oxford and Cambridge, as well as various country mansions. He gave drawing classes from his home in Long Acre and among his pupils were both Girtin and Turner.  Malton found the young Turner’s style too imaginative for precise architectural draughtsmanship, although Turner remarked later in life: But my real master, you know, was Tom Malton (W Thornbury, The life of J M W Turner, 1897, p 26-7). Malton was also an accomplished painter of theatrical scenery he worked at times for the Drury Lane Theatre and Covent Garden.

It was a snub from the Royal Academy, when he was deemed as merely a draughtsman of buildings, but not an architect, that prompted Malton to embark on his most ambitious and important work, A Picturesque Tour through the Cities of London and Westminster, published 1792-1801 for which he supplied one hundred views of which the present subject was one such example.

Following his death in 1804, the Gentleman’s Magazine described his as an ingenious and much-respected artist.  His drawings were sold at Christie’s, along with a pianoforte by Beck  and the original design for the drop curtain at the opening of the present Theatre, Drury Lane.  The drawings and engravings sold well and the piano and a view of the Adelphi were bought by the Adam brothers.

Malton exhibited a work entitled St Stephen’s, Walbrook (no. 1050) at the Royal Academy in 1802, which is possibly this watercolour, although the aquatint of the subject was published some five years earlier, in 1798.  This highly-accomplished watercolour has, until its recent re-emergence, been misattributed to Augustus Charles Pugin, and the image only known from the aquatint.