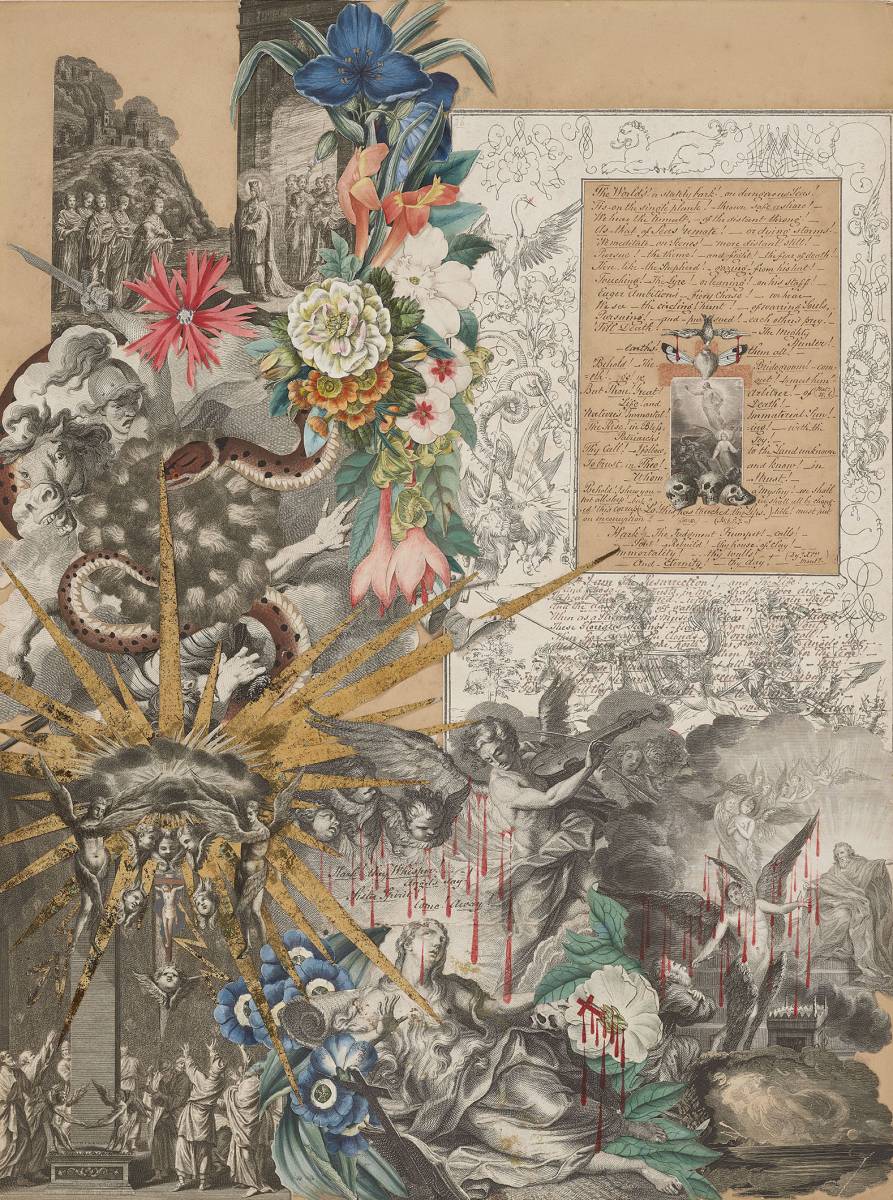 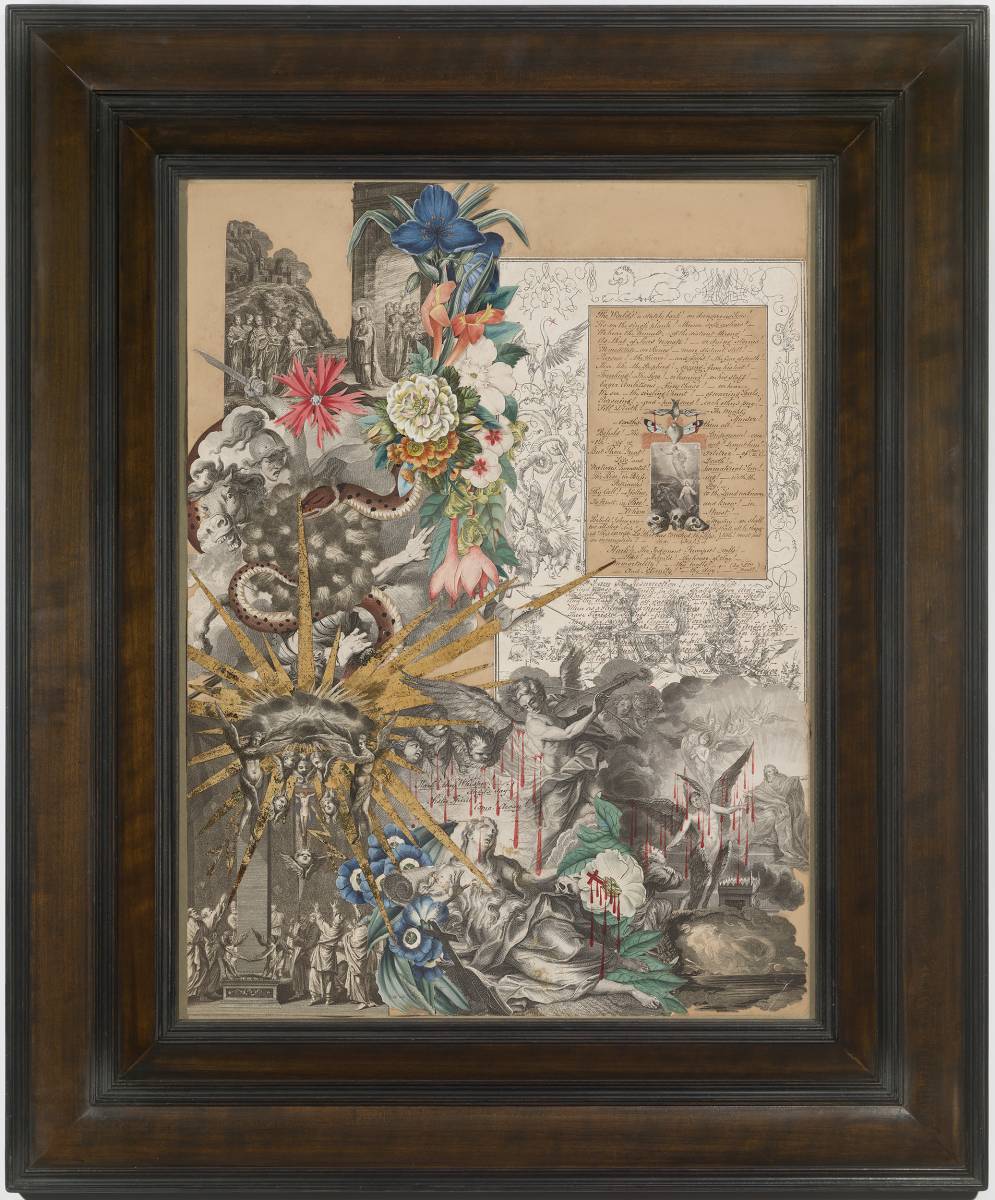 These extraordinary and almost hallucinatory collages were made by John Bingley Garland, a successful merchant, pioneer Canadian politician, public servant and mysterious ‘outsider’ artist. Garland is responsible for one of the most ambitious and remarkable sets of collages produced during the nineteenth century, the so-called ‘Victorian Blood Book’ a manuscript formerly in the collection of Evelyn Waugh and now in the Harry Ransom Center at the University of Texas at Austin.[1] Garland developed a technique of combining cut-outs from architectural and old master prints with natural history engravings, passages of scripture, decoupaged papers and ink crosses of various forms into bold and bizarre images which he then elaborately and copiously decorated with drips of blood in red ink. It is the addition of the blood which transforms these eclectic collages from the Victorian common place book to proto-surrealist works of extraordinary power, in turn, they transform Garland from a Victorian merchant and colonial administrator to one of the most remarkable ‘outsider’ artists of nineteenth-century Britain. 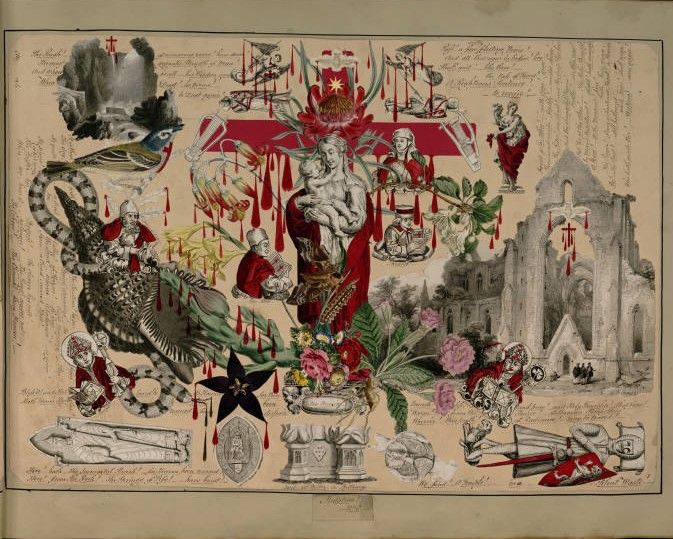 John Bingley Garland
A leaf from the Victorian Blood Book
Collage of engravings with gouache
and gold paint with extensive inscriptions in pen and ink on buff backing paper
Harry Ransom Center, The University of Texas at Austin (Evelyn Waugh Collection)

John Bingley Garland was the son of George Garland Snr, the head of a well­ established family firm, Garland and Son of Poole, Dorset, engaged in the fish trade with Newfoundland. John Bingley Garland was sent out to Trinity, Newfoundland, to manage the family's business interests, where he became a Justice of the Peace and erected a church, St Pauls, in the town. He returned to England in 1821 and served as Mayor of Poole in 1824 and 1830 With his brother, George, he inherited the family trade in imported salted cod after the death of their father. He went out again, with his wife and children, to Newfoundland in 1832, entering politics, becoming the first Speaker of the Newfoundland Parliament. He returned to England in 1834 and ran the family firm until his death, in 1875, at Stone Cottage, Wimborne, Dorset, at the age of 83. A mention in J.B.Garland's will of 'all the mythological  paintings  in the Library  purchased  by  me  in Italy', is the sole indication that he had any artistic interests. 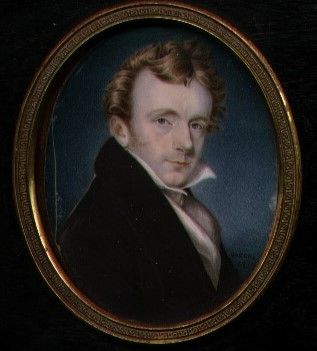 Nothing in Garland’s biography prepares us for the strange collages he created in the decades after his return to England. Garland’s most ambitious surviving artistic project was the large album acquired by Evelyn Waugh in the 1950s. It contains forty-one collage pages in a landscape format, made up from engravings carefully cut out from early nineteenth-century illustrated books, heightened with gouache and gold paper. Drops of blood in red India ink and extensive religious commentary have been added to the images, many of which are drawn from the natural world (flowers, birds, animals and reptiles, especially snakes), while others appear to be taken from luxurious books about religion and travel. Waugh's Blood Book bears an inscription from John Bingley Garland to his daughter Amy, dated 1 September 1854: 'A legacy left in his lifetime for her future examination by her affectionate father'. The album was probably intended as a wedding present. The first page of the book includes a table of contents under the heading of 'Durenstein! ', the Austrian castle in which Richard the Lionheart was held captive, and the theme of many of the plates are the spiritual battles Christians encounter on the road to Salvation.

There is evidence that, for Garland, these were objects of great emotional significance, made to communicate his deeply felt religious convictions. As Freya Gowrley has observed: ‘the emotional and affective qualities of collage made during this period are amongst its defining features.’[2] Few practitioners were as explicit in their emotions than Garland. A large collage by Garland, of engravings and photographs heightened with gouache, but without Garland's characteristic dripping blood motif, bearing a title taken from a verse in Ecclesiastes (chapter 12, verse 7) 'Or ever the silver cord be loosed Or the golden bowl be broken... ', was with Peter Nahum at the Leicester Galleries. Signed and dated 'J Bingley Garland Stone Cottage 8 Aug 1865 ', it bears a long inscription on the verso, beginning 'For Agnes Arthur nee Crawford - presented by John Bingley Garland as the work of his fingers in his seventy-fourth year and as a remembrance of Auld Lang Syne in the years 1805 and 1806', followed by an extensive quote from The Feast of Life, a lugubrious poem by L. E. Landon. Garland’s annotations were specifically designed to inform the complex iconography of collaged and drawn elements.

The four large-scale collages described here were the most impressive from a group acquired by the dealer and collector Christopher Gibbs in 1990 from the collection of Peter Burne-Jones. Gibbs sold several from the group but retained these four as the most compelling examples and they remained at his set in Albany until 2019. The four sheets represent particularly dextrous examples of image making, Garland has combined carefully collaged old master engravings, prints after antiquities and coloured prints of natural history specimens with gold paper, ink inscriptions and his characteristic drops of red India ink blood. The composite images Garland constructs are far more sophisticated than those in Waugh’s ‘Blood Book’. On each page, Garland has been careful to create intense, Baroque compositions, drawing from multiple sources to produce a cohesive design.

The first collage quotes a passage from Edward Young’s Night Thoughts (‘The world’s a stately bark, on dangerous seas with pleasure seen, but boarded at our peril). The text is contained in a discreet box on the right of the page with the concentration of collaged elements on the left and beneath, working in a similar way to the illumination in a manuscript Book of Hours; indeed, Garland has actually set the text in an engraved page of marginal drawings from Durer’s Prayer book of Emperor Maximillian. Garland shows the crucified Christ emanating from a burst of gold paper and supported by a series of collaged cherub head, below the apostles stand awed and Mary Magdalene lies prone, surrounded by enormous coloured blooms, one with a red crucifix for a stamen, dripping blood. Above a coloured serpent emerges from a cluster of botanical prints. Throughout the composition Garland includes unsettling details, showing, for example blood dripping from the wings of the holy dove onto the sacred heart, which is, itself born aloft by a pair of butterfly wings cut from a natural history publication. The second collage follows the same format. Garland places his text, taken from Samuel Taylor Coleridge’s Religious Musings in a sheet of Durer’s marginal drawings and surrounds it with a complex composition, including shells, caterpillars and a fragment of a print after Pompeo Batoni’s Penitent Magdalene.

The third collage displays a sense of horror vacui, the densely covered surface unified by long, pendulous drops of blood running down the collaged elements. Garland inscribes text from John Keble’s The Christian Year and includes a profusion of prints of both Christian and pagan subjects: Mithras and the bull, Aesculapius, Stonehenge, along with Jacob wrestling the angel and the virgin enthroned. At the centre Christ emerges from an egg, born aloft by an eagle and encircled by a serpent, a bunch of flowers and grapes exploding behind him. The fourth collage is the most polychromic: Garland having used a large section of saturated blue paint. Flowers and shells form an elaborate border and once again large and profuse drops of red Indian ink blood drip from the crucifixes shown as the stamen of the flowers.

Garland’s exceptional collages emerge from the fashion for decoupage that was hugely popular in Victorian Britain. Further research may well reveal that Garland combined old master prints with specially printed 'scraps' of the kind that could be purchased to fill the scrapbooks. The many nineteenth-century scrapbooks that survive attest to the craze for 'scrapbooking', while the elaborate Victorian photograph albums and visitor's books, where collages of photographs are set into often whimsical and amusing watercolour settings point to the wide-spread popularity of the activity. But whilst Garland’s work comes out of this tradition, the potency of his images raise broader questions about his intentions as an artist and the more specific meaning of his collages. Garland apparently had no formal training or artistic pretensions and yet he produced a sequence of visually arresting designs using collage that effectively anticipated the use of the medium into the twentieth century.

The Victorian parlour hobby of collage was later to inspire artists in the twentieth century, from the searing mock propaganda of the German John Heartfield, to the Surrealist confections of Max Ernst and Sir Roland Penrose. Collage has played a central role in Post-War art, notably with Richard Rauschenberg in America, and the Pop artists Richard Hamilton and Peter Blake in Britain. The 'Blood Collages' of John Bingley Garland are, in their delicacy, and sophistication, in their use of images cut from expensive illustrated books, and with their mysterious watercolour and manuscript embellishments, far removed from the nursery screens and parlour scrapbooks of Victorian Britain. They are remarkable and thought-provoking works of art, and as such worthy of further research and serious study.