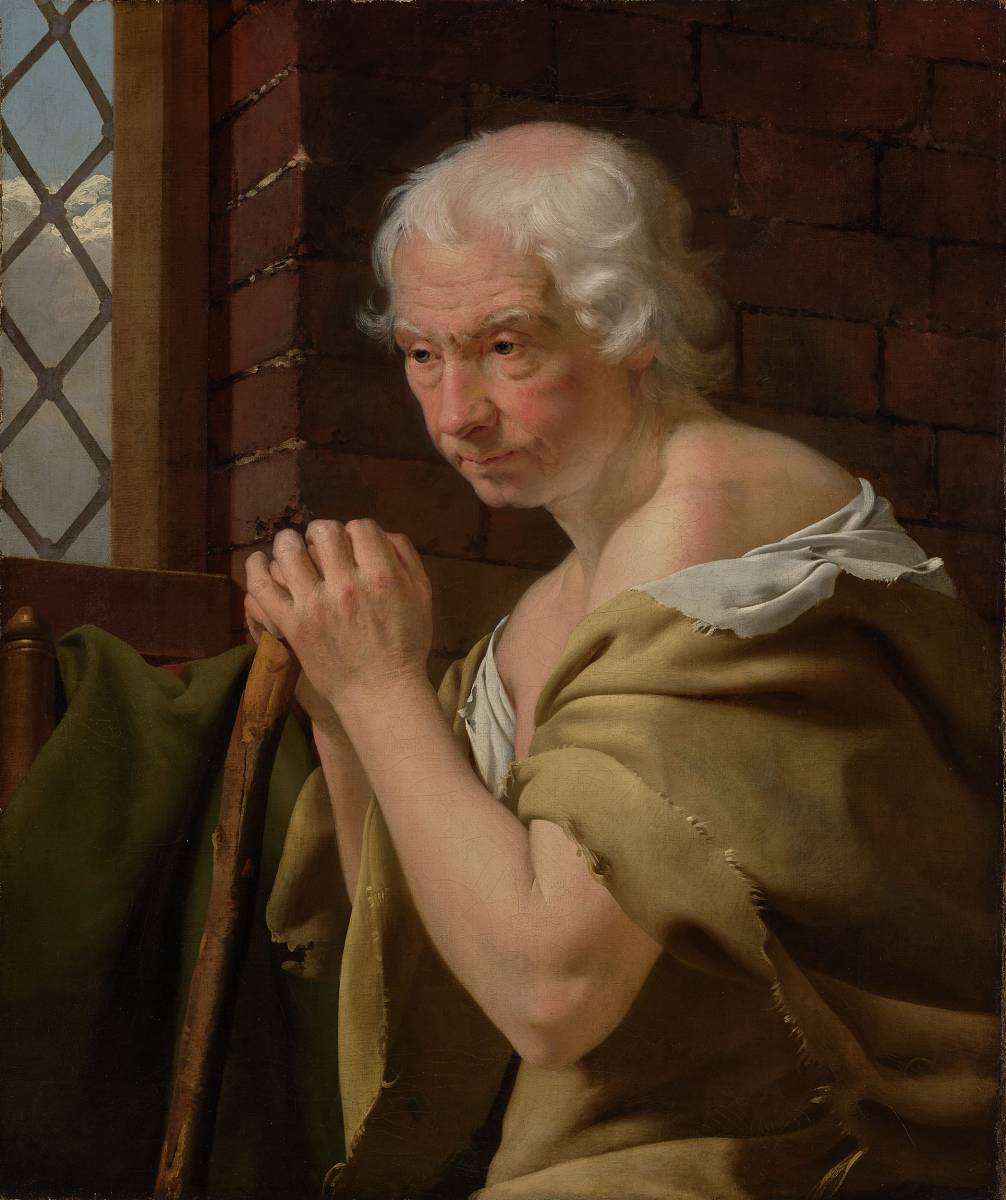 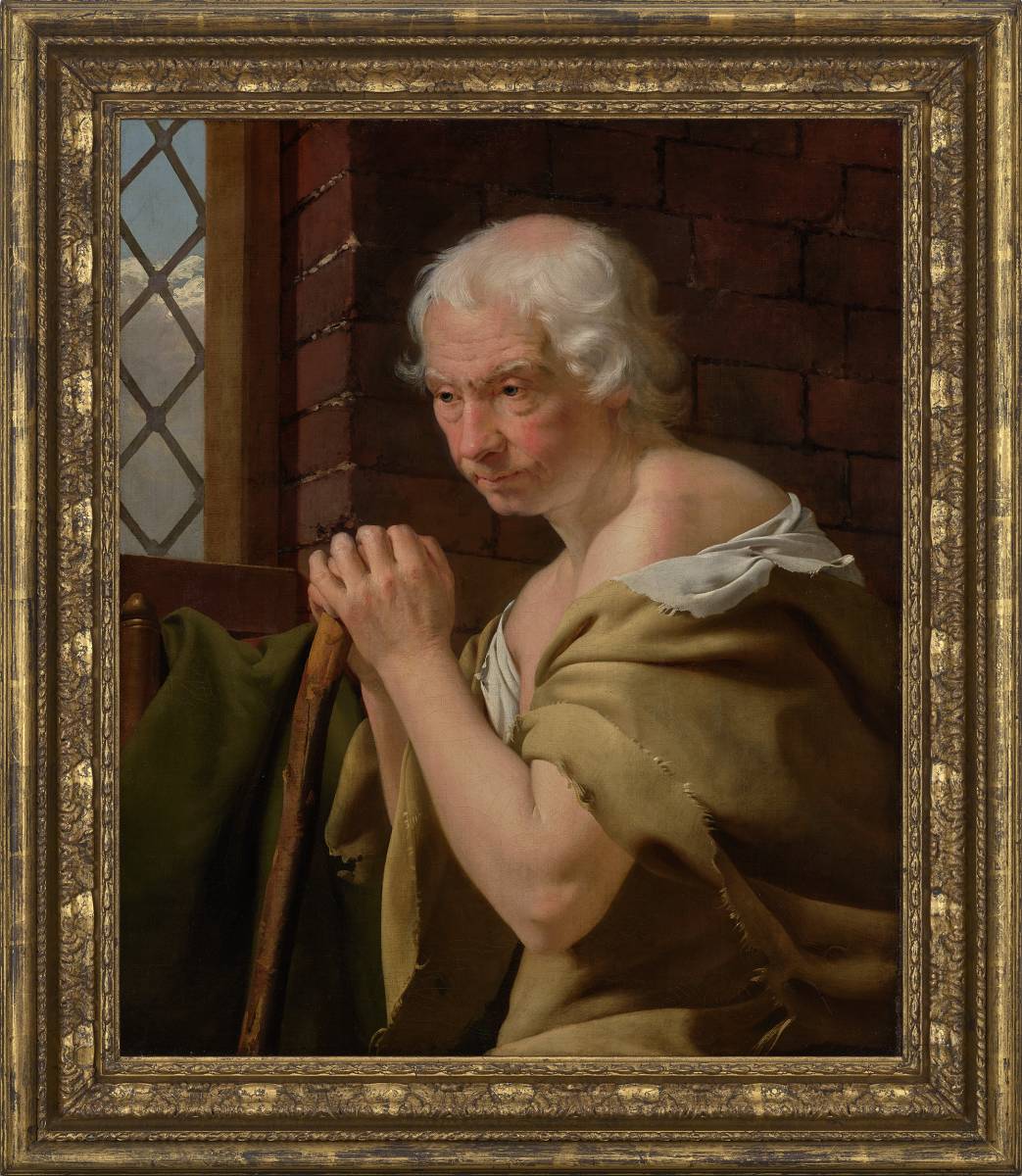 This painting by Joseph Wright of Derby is an exciting recent discovery, first published by Matthew Craske in his 2020 book Joseph Wright of Derby: Painter of Darkness, it has been identified as one of a series of depictions of old men Wright made whilst he was working on his 1769 painting The Hermit now in the Derby Museum and Art Gallery.[1]

This exceptional canvas was therefore painted in Liverpool whilst Wright was working on his great sequence of candlelight compositions. It was whilst based in Liverpool that Wright conceived and painted his two versions of An Academy by Lamplight (Yale Center for British Art, New Haven and Private Collection) and The Blacksmith’s Shop (Yale Center for British Art and Derby Museums and Art Gallery), as well as the pair of paintings depicting Two Boys Inflating a Bladder (The Getty, Los Angeles, formerly with Lowell Libson & Jonny Yarker Ltd.) and Two Girls Decorating a Cat (Kenwood House, London). Wright was fascinated by studying old men, he produced numerous paintings and drawings of elderly models as well as conceiving a group of significant subject-pictures which feature old men as the central character. These paintings which include The Old Man and Death (Wadsworth Atheneum Museum, Hartford), The Captive from Sterne (Vancouver Art Gallery) and The Hermit (Derby Museum and Art Gallery) all centre on depicting old men contemplating their own mortality and point to Wright’s place as one of the greatest philosopher-painters of the eighteenth century. 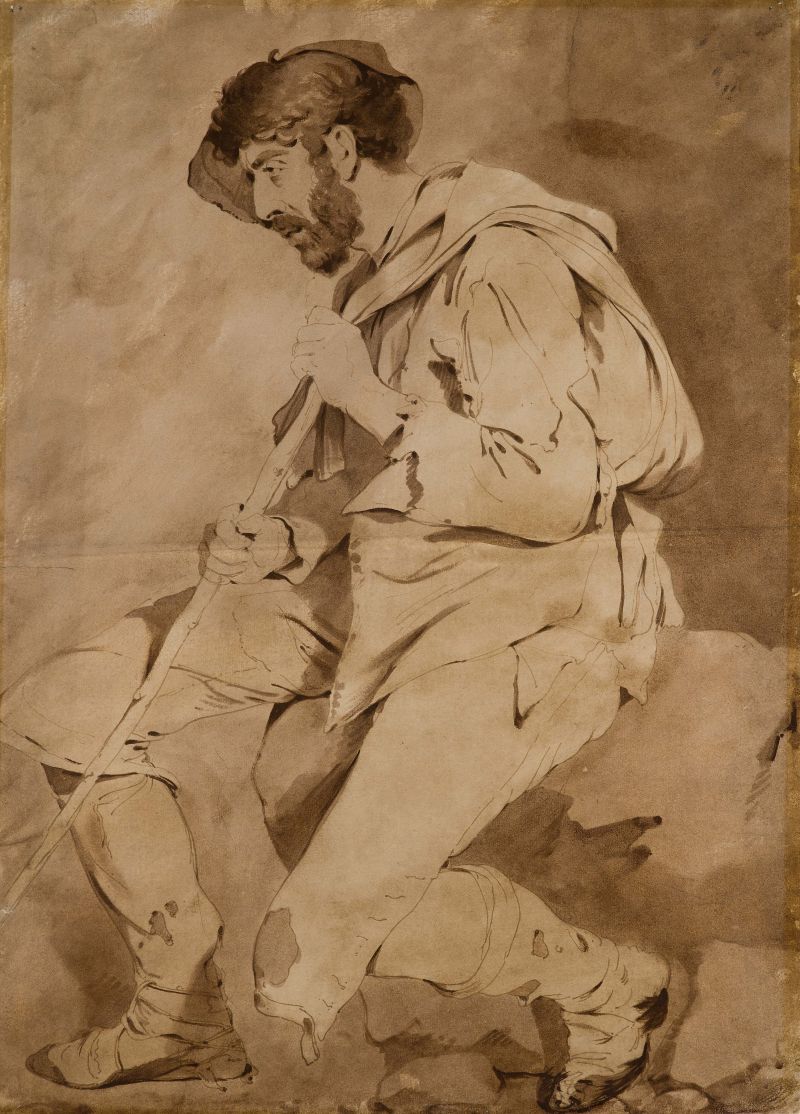 Joseph Wright of Derby was born into a professional family in Derby, he was trained under Thomas Hudson as a portraitist in London. In 1753 Wright returned to Derby, in common with other painters of the period, preferring to establish a reputation as a portrait painter in his hometown before attempting to compete in London. Wright was evidently ambitious, engaging with many of the mechanisms for the promotion of art in the middle of the eighteenth century; he sent paintings to the new exhibiting societies, worked with engravers to try and promote his paintings and in 1768 moved to Liverpool in pursuit of new clientele.

Wright’s great sequence of candlelight paintings are notable for their inclusion of identifiable models. The first of these, Three Persons Viewing the Gladiator by Candle-Light, painted in 1765 almost certainly shows Peter Perez Burdett, Wright’s sometime portrait sitter, model, artistic adviser and debtor, along with Wright himself and an old man traditionally identified as John Wilson, the resident of an almshouse in Derby. There is plenty of contemporary evidence to suggest that Wright sought older models for his works.The first entry in Wright’s surviving Account Book preserved in the National Portrait Gallery, London records: ‘John Fletcher of Osmaston an old balded headed Man.’ Fletcher, from the small village of Osmaston, 12 miles from Derby, presumably agreed to sit to Wright. Later in the 1770s Wright made a series of powerful oil studies of a striking, bearded man with long white hair and aquiline profile. A drawing of the same model now in the Morgan Library and Museum, New York identifies the sitter as ‘John Staveley who came from Hertfordshire with Mr French and sat to Mr Wright in the character of the old man and his ass in the Sentimental Journey.’ Staveley appears in Wright’s account book as the sitter in a number of completed works and scholars have long identified him as the model in some of Wright’s most ambitious historical works. 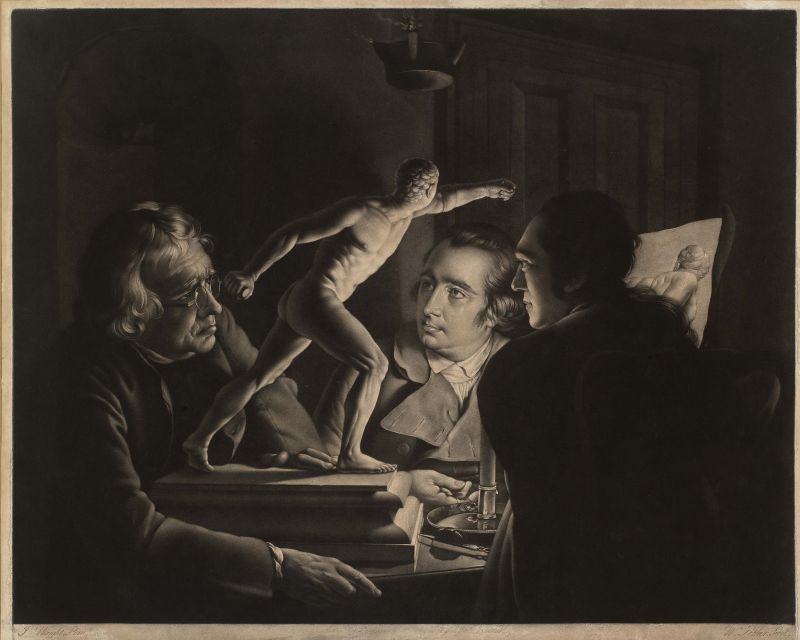 It is probable that John Fletcher and Staveley were labourers. The practice of employing working men as models was extremely fashionable in London around 1769. Joshua Reynolds encountered a man: ‘exerting himself in the laborious employment of thumping down stones in the street; and observing not only the grand and majestic traits of his countenance, but the dignity of his muscular figure, took him out of a situation to which his strength was by no means equal, clothed, fed, and had him, first as a model in his own painting room, then introduced him as a subject for the students of the Royal Academy.’[2] This was the model George White who formed the basis for a series of Reynolds’s most esteemed historical compositions, including Ugolino and his Children. Reynolds’s paintings, were frequently, in effect, portraits, showing White in various poses, their status as subject pictures suggested by his costume and Reynolds’s titles: Resignation, Pope Pavarius, The Captive. Through Reynolds White modelled for Benjamin West, Johan Zoffany and the sculptor John Bacon who all produced similarly historicised portraits.

The ubiquity of White as a model in London is partly explained by the apparent difficulty of finding suitable models. The Scottish painter David Allen wrote to Gavin Hamilton noting ‘we rarely see in this country a countenance like that of a Franciscan, or an Italian beggar, so full of character and expression, and so useful to the study of History-Painting.’ It appears that Wright, operating outside London, faired better. Just as Reynolds did, Wright posed his models as historical and literary figures as well as generic types. Staveley was posed as The Captive from Laurence Sterne’s Sentimental Journey and another model appears in a painting with the somewhat ambiguous title: The Hermit. Showing an elderly man in a lamplit cave, Wright’s first nocturnal landscape and one of the most ambitious paintings he made in Liverpool in 1769. Matthew Craske has recently suggested that the present painting was made by Wright whilst he was working on The Hermit. Writing in his recent book, Joseph Wright of Derby: Painter of Darkness, Craske discusses a painting by Wright of an old man from the Arkwright collection and then addresses our painting:

‘Another study of this sort has come to light. A similar model, if not the same one, is shown stooping forward, seemingly lost in reflection. He is set against a crumbling brick wall, painted in the technique of representing ruin that Wright first employed in his great conversation portrait of Burdett and his wife, Hannah (1765)…It is, thus likely to be another study of a dishevelled, stooped, old man that was made in preparation for The Hermit.’[3]

Shown leaning on a rough wooden staff, dressed in frayed sackcloth, Wright poses his vigorous old model in a simple interior. The ‘crumbling brick wall’, as Craske observes, was a motif Wright had first explored in his double portrait of Peter Perez Burdett and his Wife, Hannah, now in the Národní Galerie, Prague; aged bricks, mortar and flaking render would go on to form a vital backdrop for a succession of Wright’s most ambitious nocturnal works, from the Farrier’s Shop, Dale Abbey of 1770 to Old Man and Death of 1773 and The Captive from Sterne of 1774. The brick backdrop does impart a sense of constriction, possibly even incarceration. The light source is evidently moonlight glimpsed through a leaded window. The painting therefore contains all the ingredients of Wright’s more famous depictions of beggars: the vigorous old man, dressed in rags, staff in hand in a mood of contemplation, set in a moonlit interior.

Craske is surely correct in suggesting a date of 1769. The lushly painted canvas is entirely consistent with Wright’s technique on the eve of his departure for Italy. The luminous flesh tones, the lines of white paint used to suggest the white hair and the delight in capturing the frayed edge of the fabric all find their parallels in Wright’s works of the period. Perhaps most compelling is the palette, the hot underpainting of the flesh is identical to Wright’s Liverpool period portraiture. It is possible that the model in our painting appears in one other work by Wright from this period: The Old Man and Death of 1773. Comparing the physiognomy of the two sitters – the slightly bulging eyes, with their clear blue colouring, the pronounced, strait nose and wispy white hair hanging below the ear are all consistent – the only difference is the stubbly beard that the model wears in The Old Man and Death.

When our painting appeared on the market in 1999 the unlined canvas was inscribed on the reverse: ‘W. Tate F.S.A’. It was suggested that the painting had been made by Joseph Wright of Derby’s friend and pupil William Tate. In Liverpool Wright lodged with Richard Tate, whose brother, William became one of his best-known pupils and a lifelong friend. Wright’s encouragement of Tate included encouraging him to exhibit works at the Society of Artists in London and even campaigning for his election as a Fellow in 1773. The inscription on the reverse of our painting and the fact that Tate exhibited a work entitled ‘An old man’ at the Society of Artists in 1771 has always prompted the attribution to Tate. But, as Craske recently pointed out, the inscription: ‘is probably an indication of ownership, rather than authorship. A very fine work of art, this is superior to anything that survives by Tate and cannot be something made by the latter after a couple of years of instruction.’[4] It is, therefore, a very remarkable rediscovery of a subject-painting painted by Joseph Wright of Derby at the height of his powers. 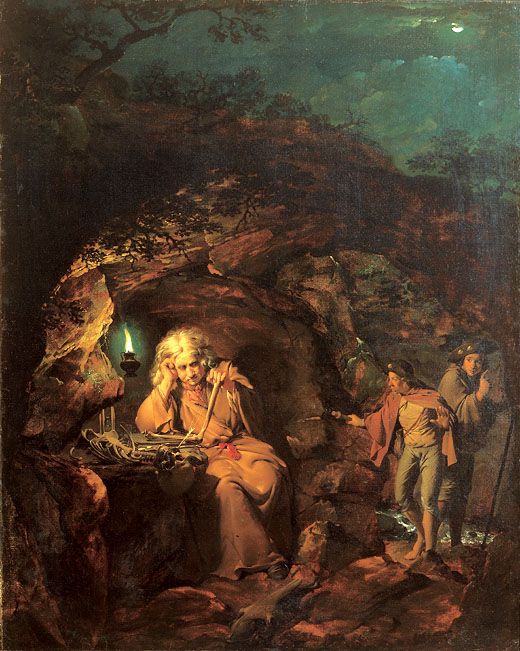 We are very grateful to Dr Martin Postle for confirming the attribution of this painting on first-hand inspection; it is to be included in his forthcoming catalogue raisonné of the works of Joseph Wright of Derby.