This fluid landscape was painted by Richard Wilson in the first phase of his career, showing a scene on the River Severn close to Wilson’s native Wales. In the 1740s Wilson was one of the foremost landscape painters in Britain. In 1746 Wilson contributed two landscape roundels to the Foundling Hospital, joining works by William Hogarth, Thomas Gainsborough and Thomas Hudson. The present panoramic view belongs to a small group of rococo topographical landscapes that Wilson made before he travelled to Italy in 1751, they show in embryo all the characteristics which would make Wilson one of the most significant figures in British landscape painting in the eighteenth century.

Richard Wilson was born in mid-Wales, into a well-connected gentry family. In 1729 he went to train in London with the portrait painter Thomas Wright. It was as a portraitist that Wilson first practiced, although by the mid-1740s he was turning increasingly to landscape. In 1744 Wilson completed a grand, panoramic view of Westminster Bridge (Tate Gallery, London). The painting, which shows the new Westminster Bridge under construction, is a light filled cityscape, much in the manner of contemporary Venetian painters such as Canaletto. Although the latter did not arrive in London until 1746, his works were familiar in Britain and Wilson’s bright palette and careful composition suggest he was aware of Canaletto’s work, down to the boat in the foreground, which has the look of a Venetian gondola. As David Solkin has pointed out Wilson’s landscapes of the 1740s are characteristic products of the English rococo, as such they show the profound influence of not only Italian art, but French painters, who Wilson would undoubtedly have encountered at the first St Martin’s Lane Academy.[1]

The present painting shares the same pastel palette and creamy texture of paint with Westminster Bridge and other early landscapes. In another painting of the same period Caernarvon Castle, now in the Detroit Institute of Arts, Wilson shows an artist at work recording the great fortification on the River Seiont in northwest Wales. As many commentators have pointed out, Wilson has transformed the castle from a substantial architectural structure to a picturesque ruin, altering details to fit a compositional format derived from the classical works of Claude and Gaspard Dughet. The pastoral message of such landscapes has been much discussed, it is clear Wilson was invested in producing canvases which showed a contented, orderly Britain for his patrician patrons. The present painting shows a leisurely river scene, a seated figure in the foreground is shown fishing, identifiable as a gentleman in a tricorn hat, this painting celebrates angling for sport, rather than subsistence. The flat, sun-drenched landscape captures the bend in a large river, crossed by a five arch stone bridge in the middle distance, with a town shown on the horizon. The precise location has not been definitively identified, although the suggestion that it depicts the River Severn at Atcham in Shropshire with Shrewsbury in the distance seems highly likely. Shrewsbury would have been a major stop for Wilson on any journeys he took to stay with his family in North Wales and Cheshire. 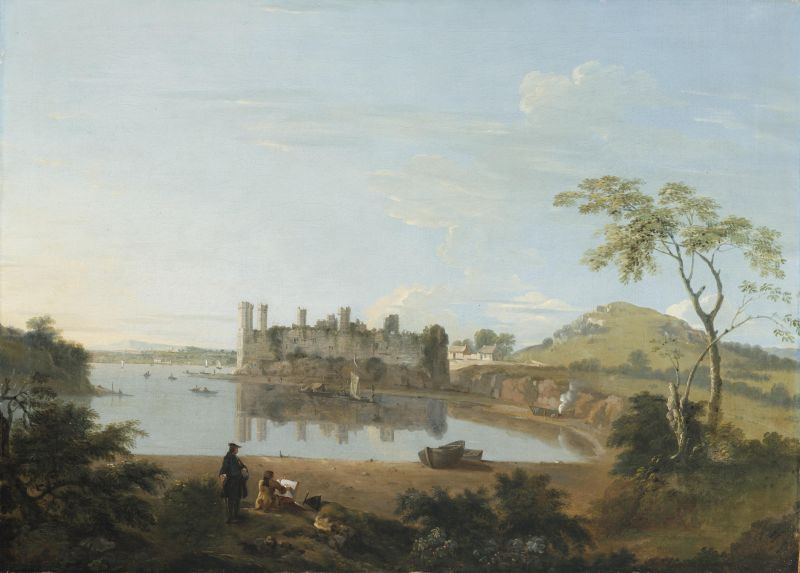 Painted with remarkable brio, Wilson has used a thickly loaded brush pushing the paint to the edge of each stroke to form thick ridges of impasto. Nowhere is this more evident than in the breezy sky and rapidly worked copse of trees. Technically this painting is close to works by Thomas Gainsborough of the same date, Wilson would certainly have known Gainsborough’s work and the comparison is suggestive. Whilst there is no eighteenth-century provenance for the painting, it is notable that the first recorded owner was the great grandson of Francis Beckford, brother of William ‘Alderman’ Beckford and uncle of William Beckford, both of whom owned works by Wilson.[2]