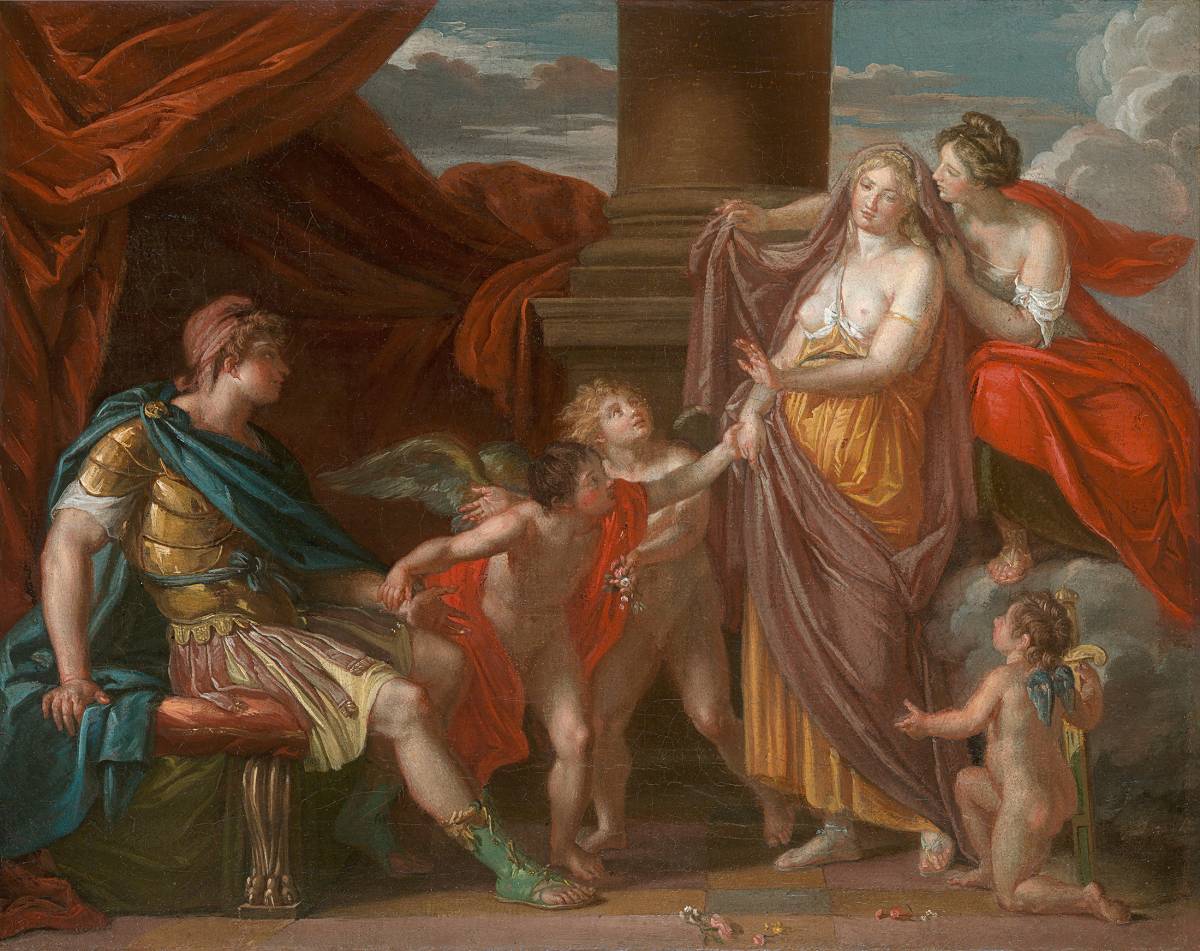 This beautifully painted oil sketch was made in preparation for a large-scale painting of the same subject now in the Musée du Louvre, Paris. The sketch may well have been made in 1777 when Hamilton was working on a possible commission from William Petty, 2nd Earl of Shelburne and later 1st Marquess of Lansdowne to ‘paint the story of Paris and Helen’ for a room at Lansdowne House.[1]

Gavin Hamilton maintained a reputation of the highest order during his lifetime, and his peers thought him a crucial pioneer of the vigorous and noble classicising mode forged in mid-century-Rome. He arrived in Rome in 1748, and chose to enter the studio of Agostino Masucci, the principal champion of the long-standing classical tradition in Roman art, leading back through Carlo Maratti to Raphael. The young artist initially painted portraits for British Grand Tourists, but the economic support of his affluent family allowed him to concentrate on history painting, the most noble but invariably the least lucrative genre of painting. While in Rome Hamilton fell under the sway of the antique, fostered in the 1750s by influential visits to Herculaneum and personal contact with Robert Adam and Johann Joachim Winckelmann. His university education (in Glasgow) unusual among eighteenth-century artists, enhanced his ability to pursue history painting through a thorough knowledge of classical literature, and his 1761 acceptance into the Accademia di S. Luca attests to his prominence amongst the international community of artists in Rome. Hamilton’s first successful historical composition was painted in 1760, Achilles Lamenting the Death of Patroclus, now in the National Galleries of Scotland, Edinburgh.  This was the first in a sequence of large-scale depictions of scenes from the Iliad. The finished works are notable for their restrained palette, stoic expressions and frieze-like compositions which announced a new epic dimension in European painting. The stern Homeric subjects moreover placed the artist at the forefront of the movement to return to the most archaic classical sources. Hamilton had the sequence engraved from 1764 by Domenico Cunego. As a result, his compositions were widely disseminated and artists as diverse as Jacques-Louis David and John Trumbull were able to draw repeatedly on his ideas.

One of Hamilton’s earliest works was a depiction of Venus Presenting Helen to Paris commissioned in Rome by Nathaniel Curzon, 1st Lord Scarsdale in 1756. The painting cost £200 and remains at Kedleston Hall, Derbyshire. The scene is taken from the Iliad and shows Venus, accompanied by Cupid, bringing Helen to Paris, the son of Priam, king of Troy remains seated. Hamilton returned to the subject in the 1770s when he was working on a commission for a sequence of paintings for Lord Shelburne. By this date Hamilton was not only a leading neo-classical painter, he was the foremost excavator and dealer in antiquities in Rome. Hamilton catered to a number of sophisticated and voracious collectors in London. Chief amongst them was Lord Shelburne, who was in the midst of remodelling his London house and planning a gallery to receive his growing collection of antique marbles. Hamilton offered help with sourcing an architect and tried to persuade Shelburne to reserve a space to be decorated with a cycle of paintings by Hamilton himself.

The cycle is first mentioned in 1772: ‘I have at last got the drawing of your gallery and the small room where it was proposed to paint the story of Paris and Helen. I am perfectly satisfied with both, and hope they will meet with your Lordship’s approbation, and that no time may be lost I shall send them rolled up in a small case three days hence by the Milan post directed to your Lordship.’[2] Hamilton may have been being optimistic at this point, because in 1777 the tone is a little more speculative, writing to inform Shelburne that: ‘My great plan in life are those six small pictures representing the story of Paris and Helen. I had already begun them, and could wish they fell into your Lordship’s hands, as my view will be more honour than interest. They will be engraved by Volpato.’ In 1780 he was still at work, commenting in a letter to Thomas Pitt that ‘I can not help every now and then to take in hand my favourite enterprise of six small pictures representing the story of Paris. I have made sketches of all the different subjects, excepting the death of Achilles, which perhaps is one of the most interesting. I wish you was here to give me a little friendly advice.’[3]

Guillaume Faroult has recently identified this small oil sketch with one of the ‘six small pictures’ begun for Shelburne.[4] It seems certain that this oil was made as part of the scheme, whether it is a modello – one of the ‘sketches’ mentioned by Hamilton in his letter to Pitt -  or even a reduced compositional study made for the engraver Giovanni Volpato is less clear. The easy confidence of this painting, the precision and intricate detail – in areas, such as the highlights on Paris’s costume and flowers scattered across the foreground– suggests that this is a finished work, rather than an oil sketch. Hamilton did make a large-scale version of the present composition, the painting that was recently acquired by the Louvre. It is fair to say that the change in scale resulted in the loss of some of the vitality and drama of the present small-scale work.

Preparatory works are exceptionally rare in Hamilton’s oeuvre, there are almost no known drawings. This makes this beautifully fluid, small-scale modello of particular importance. Despite its scale, it perfectly captures Hamilton’s complex vision. The basic composition derives from seventeenth-century depictions of the Continence of Scipio, with the seated Paris taking the place of Scipio and the reluctant Helen, the Carthaginian captive. Hamilton’s staging retains an air of the Baroque, using the central cupid to act out the narrative of the scene, he is shown taking the hand of the seated Paris and hand of the chaste Venus, who is, in turn, being revealed by Venus, who seated on a billowing cloud. The composition differs significantly from Hamilton’s earlier depiction of the same subject at Kedleston. The upright composition has been more successfully treated in landscape, enabling the figures to be more clearly articulated and giving a frieze-like quality which adds to the neo-classical feel of the work. Preserved in fine condition, this small painting demonstrates Hamilton’s skill as a technician. 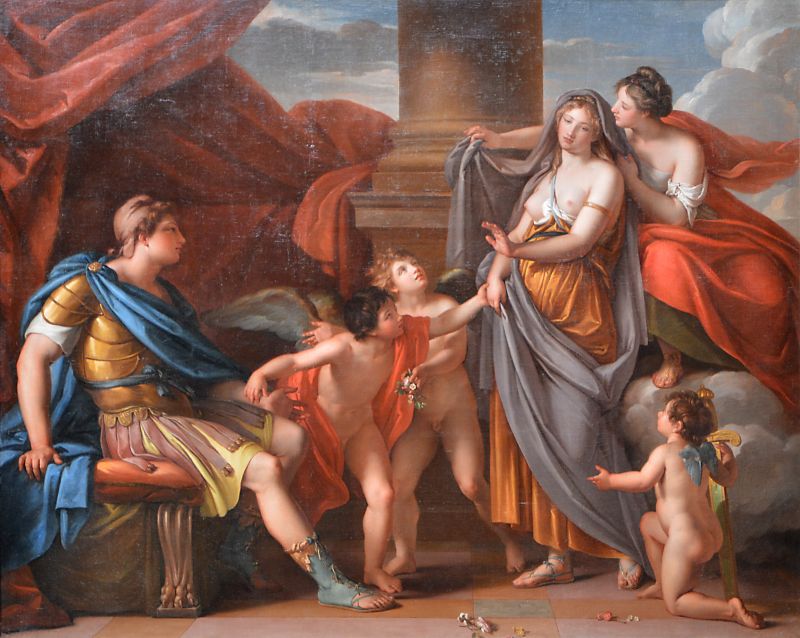