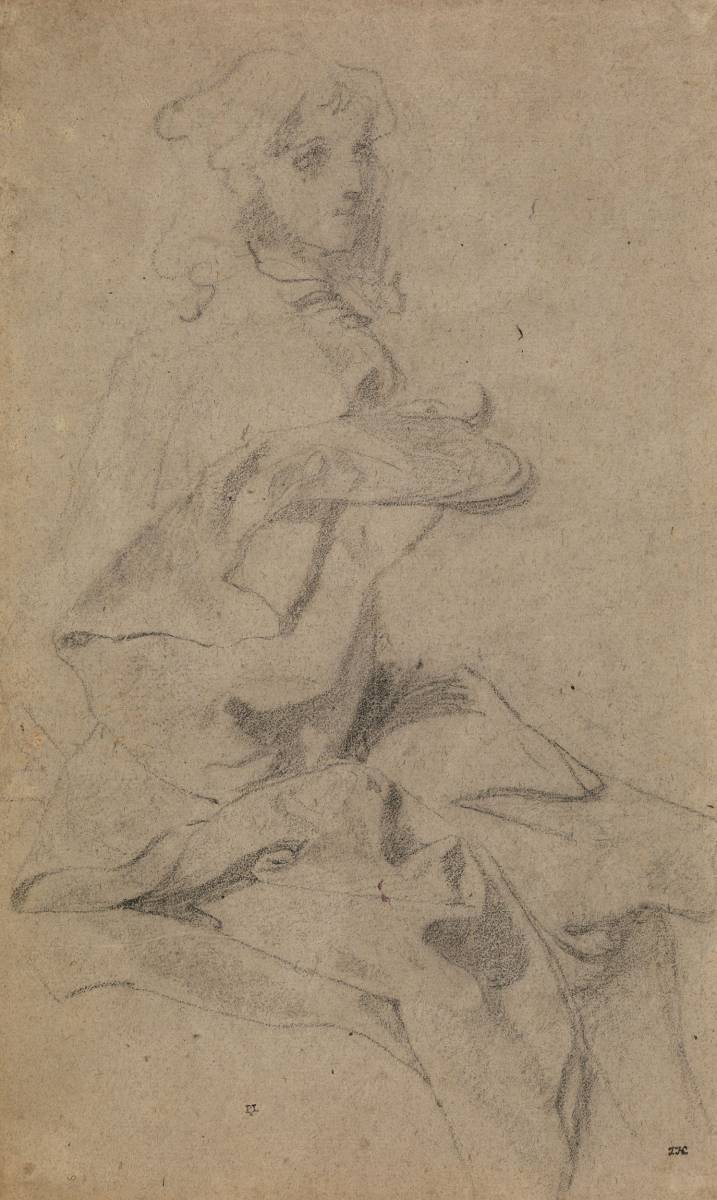 It was Lely's practice to dead colour the portrait on the canvas and then to pause in order to work out the fall of the drapery by making a sketch on paper. In 1674, for example, when Lely was painting Charles Beale junior, Beale's father noted that Lely 'took a drawing upon paper after an Indian gown which he had put on his back, in order to the finishing the drapery of it.' The sketch here shows Lely thinking about the appearance of drapery. There is a similar study, for the figure of Lord Cornbury in the double portrait from the Clarendon collection, which is at the Fondation Custodia which Oliver Millar dated to the early 1660s.

The drapery was the main point of interest in the drawing for Lely, and therefore the most highly developed part of the sketch. This explains both the cursory treatment of the face and the slightly ambiguous drawing of the figure. The sheet cannot immediately be related to any surviving portrait by Lely. Whilst the identity of this sitter is unknown, he was clearly youthful and we could also speculate that it was an artist, since the backwards look over the right shoulder was a pose made famous by Van Dyck's self-portraiture, such as in the example engraved by Lucas Vorsterman for Icones Principum Viorum. This is also the posture adopted by Lely's pupil John Greenhill for his self-portrait now at Dulwich Picture Gallery which has been dated to the early 1660s when he was a student in Lely's studio. Greenhill was probably also aware of Robert Walker's widely copied self-portrait of c. 1645 in the Royal Collection in which he holds a drawing, much as Greenhill does. Ingamells has suggested that Greenhill is holding the portrait drawing that Lely made of him, c. 1662, which is now in the British Museum. Indeed, given the close similarity of Lely's pose with Greenhill's self-portrait, it is tempting to associate Lely's drapery study with Greenhill's work. This might also explain the ambiguity in the sketch for it appears that Greenhill's self-portrait was originally a three-quarter canvas – i.e. a portrait of the sitter's head and torso - but two further strips of canvas were added which had the effect of converting it to a half- length – i.e. showing the sitter down to the knee. Ingamells has suggested that Greenhill decided to enlarge his self-portrait, by adopting a seated pose and adding a long flowing sash draped over his right shoulder, perhaps to mask difficulties in the shoulder which has been drawn somewhat too forward of the body. Perhaps Lely drew this sketch in an attempt to help Greenhill resolve the challenge of adapting his self-portrait, by roughly sketching a half length portrait of a youth - reflecting the original state of Greenhill's self-portrait - and then below it elaborating an arrangement of drapery, to mimic the process that Greenhill was himself attempting in expanding the painting.