In 1787 Reynolds wrote to his friend and patron, Charles Manners, 4th Duke of Rutland: ‘the greatest news relating to virtu is Alderman Boydel’s scheme of having pictures of the most interesting scenes of Shakespeare, by which all the painters and engravers find engagements for eight or ten years; he wished me to do eight pictures, but I have engaged only for one. He has insisted on me taking earnest money, and to my great surprise left upon my table five hundred pounds – to have as much more as I shall demand.’[1] Boydell’s Shakespeare Gallery was one of the most elaborate schemes for the promotion of contemporary art undertaken during the eighteenth century and given his celebrity, as the founding President of the Royal Academy and leading theoretician on painting, Reynolds’s involvement was clearly crucial for its success. Reynolds chose as his ‘one’ canvas a subject from Macbeth, for which the present sheet is the first recorded study. 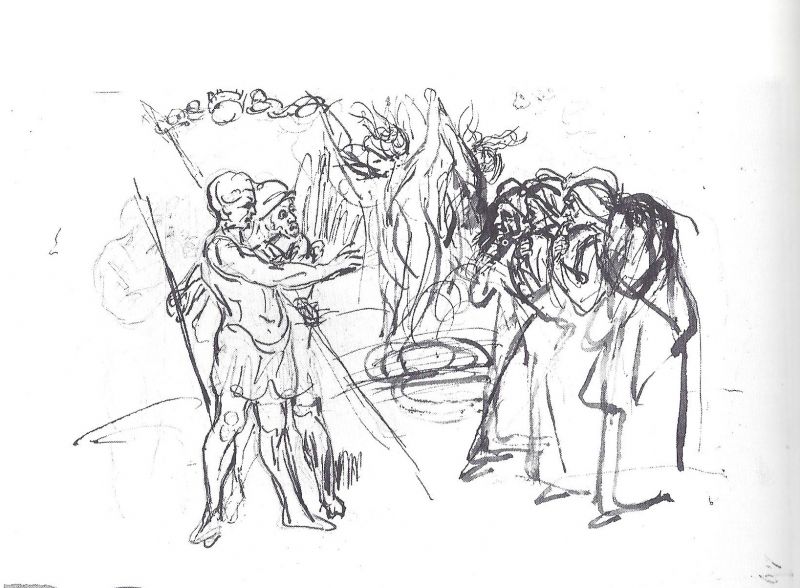 Contemporary newspapers reported that Reynolds had chosen ‘the Pit of Acheron’ as his subject, this was the setting of Act 4, Scene 1, in which Macbeth visits the witches to have confirmation of their prophecies and they summon horrid apparitions to allay his fears. Reynolds was clearly enthralled by the opportunity to depict the supernatural machinery introduced by Shakespeare: thunder, a cavern, witches round a cauldron conjuring apparitions at the demand of Macbeth. The scale of the canvas Reynolds was given by Boydell, recorded in his Pocket Book as ‘Cloth 8f. 6 high / 12 f. – long’, combined with the prestige of the commission probably prompted Reynolds to produce a number of ink sketches of the composition before beginning the painting itself. A compositional study survives at the Beinecke Rare Book and Manuscript Library, Yale University showing Macbeth with the witches; the present previously unrecorded and unpublished study clearly precedes the Beinecke sheet being a preliminary idea for the figure of Macbeth, and must be considered the earliest surviving drawing for scheme. 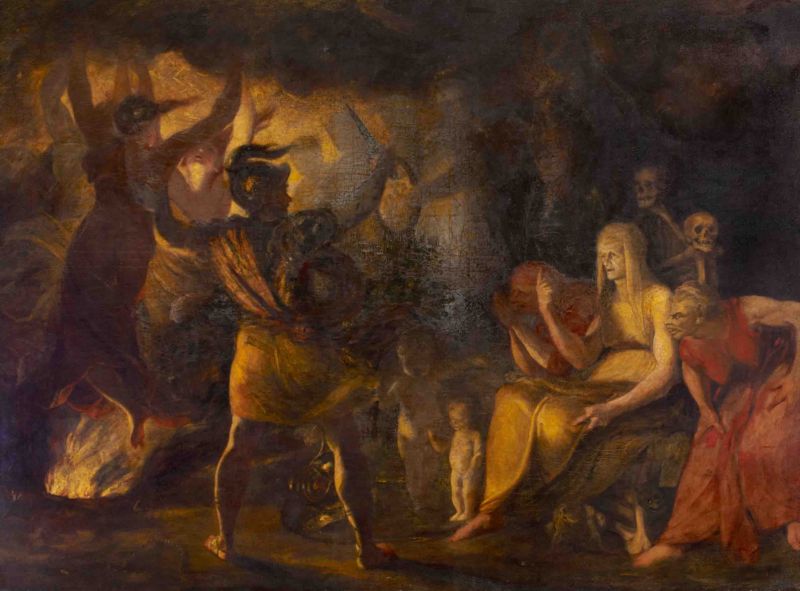 In contrast to the finished painting, now at Petworth House, West Sussex, where Macbeth is shown from behind, clearly fearful of the witches apparitions, Reynolds originally planned him as a heroic, Baroque general, right arm outstretched commandingly silencing the witches. The change in character from triumph to fear suggests the contemporary cultural shift in the reading of Shakespeare. Early in the century producers and critics had been unwilling to integrate the witches with the ‘real’ characters in the play. Consequently, they were presented separately from the main drama, as a divertissement, performing comic dances with broomsticks and singing songs. By the 1780s they were reinstated into the main drama and seen as integral participants.  In painting this shift meant Macbeth was seen as offering episodes which perfectly accorded with Edmund Burke’s definition of the sublime. Painters such as Henry Fuseli, who specialised in capturing scenes of the supernatural, began to depict episodes from the play, including Act 4, Scene 1. Reynolds clearly saw the potential for depicting a savage landscape and all the supernatural paraphernalia of Shakespeare’s text. For the figures he turned to a host of old master sources, including Michelangelo and in the pose of Macbeth, as it was realised in the final painting, according to J.M.W. Turner, Leonardo da Vinci’s Vitruvian Man, although as Martin Postle has pointed out, he is closer to James Barry’s Satan from his etching of Satan Summoning up his Legions. The final painting was the subject of a dispute between Reynolds and Boydell and remained in Reynolds’s studio until his death in 1792 when it was sold, along with this study, at his studio sale. Today Macbeth and the Witches is wholly legible only in Robert Thew’s 1802 engraving, the picture itself having darkened considerably over the past 200 years.

This fluid and confident pen and ink study is an extremely rare example of a figure sketch directly related to one of Reynolds’s most important historical compositions. In its strength, poise and drama it undermines Reynolds’s reputation as a poor draughtsman.

On a pen and ink study of Hecate (Private Collection), also made for Macbeth, there is an inscription, in the same hand as the present sheet, noting: ‘Sir Joshua seldom made any sketches with a pencil, or pen, and when he did so, was usually very careful, to destroy them immediately; such sketches therefore and by chance have been preserved on account of their rarity.’[2] 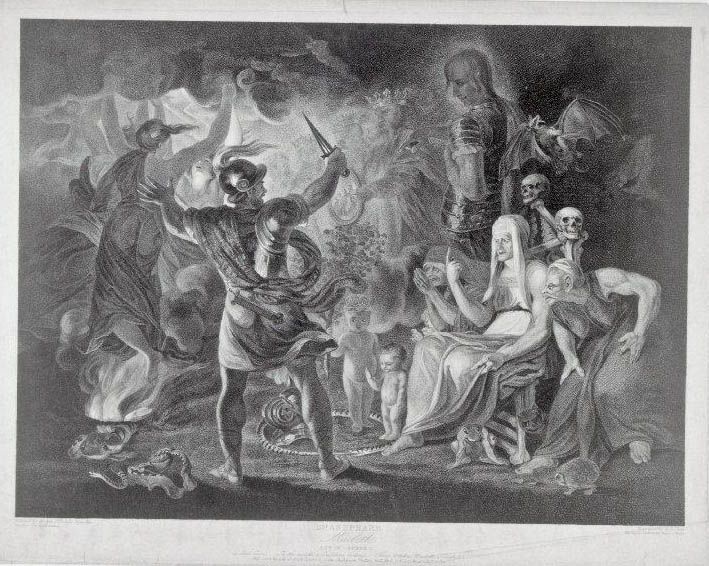