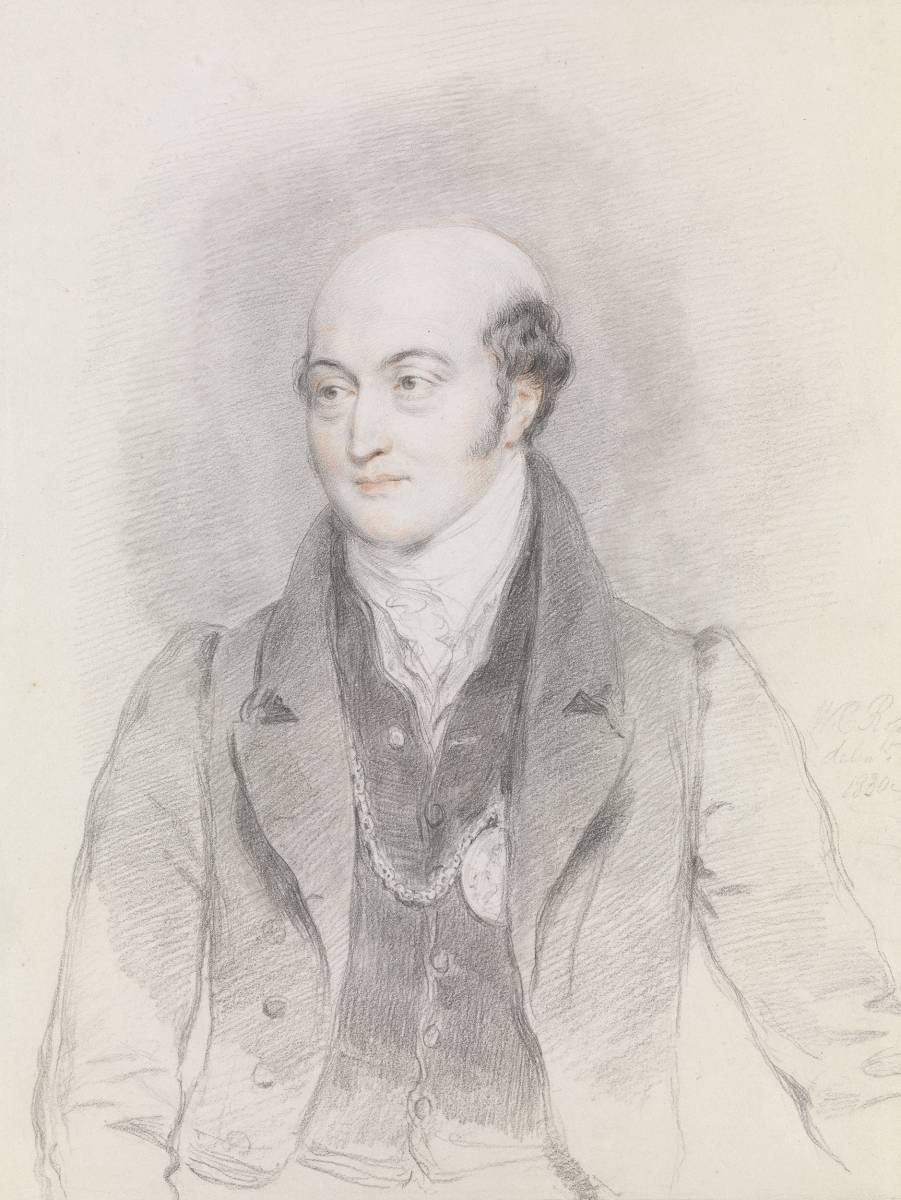 This sensitive chalk portrait of Sir Thomas Lawrence was published three weeks after his death in January 1830. Made by the celebrated miniaturist William Charles Ross at some point during the 1820s, it commemorates Lawrence as President of the Royal Academy, showing him wearing the President’s medallion. Lawrence was elected President of the Academy on the death of Benjamin West in 1820 and remained in post for the rest of his life. Portraits of Lawrence are comparatively rare, he was equivocal about making self-portraits. The unfinished oil of about 1825 now in the collection of the Royal Academy may be the portrait commanded by King George IV, in which he suggested that the artist wear: ‘the costume of his Doctor-of-laws gown’ but not the cap as ‘we shall not recognise you without your bald head.’ By the time Ross made this penetrating study, Lawrence was not only the most celebrated portraitist in Britain, he was the most celebrated painter in Europe with a worldwide reputation.

William Charles Ross was born in London, the son of a Scottish miniaturist. A precocious technician, Ross was, according to Henry Ottley, admitted to the Schools of the Royal Academy at the age of ten where: ‘his careful studies from the antique and living model, built him up in that accuracy of delineation which has always been a distinguished merit of his works.’ Ross took full advantage of the many prizes and premiums being offered by the Royal Academy and Society of Arts. In 1808 he won the silver medal of the Society of Arts for a drawing, The Judgement of Solomon; in 1809 he won the large silver palette for a miniature of Venus and Cupid; in 1810 the silver medal for a drawing, Caractacus before Caesar; in 1811 the silver medal for the drawing Samuel Presented to Eli; in 1816 the Isis medal for a miniature of the twelfth duke of Norfolk, president of the society; and finally, in 1817, the gold medal of the Society of Arts for a large watercolour drawing, The Judgement of Brutus.

Ross's preference for historical subjects at this early stage of his life is quite clear from the subject matter that he chose for his competition pieces, and he may have been influenced in this by his mentor at the Royal Academy Schools, Benjamin West. None the less his decision to pursue portraiture at the expense of historical painting appears to have been made by 1814, when he was apprenticed to the successful miniaturist Andrew Robertson. Although Robertson was also a Scot they probably became acquainted in London, where Robertson ran a flourishing studio in Gerrard Street, Soho. There Ross must have become acquainted with Robertson's innovation—the glossy, highly-finished rectangular cabinet miniature that superseded the slighter, oval miniatures produced by Cosway's generation at the end of the eighteenth century. Ross was quick to make his mark working in this new style and, while still apprenticed to Robertson, in 1825 ‘Sir Thomas Lawrence pronounced Ross the first miniature painter of his day – a recommendation which may be said to have established his fame.’

This beautifully rendered drawing, which recalls Lawrence’s own portraits in black and red chalk, seems likely to be based on studies Ross made from life. Finished in 1830 this drawing was exhibited at the Royal Academy shortly after Lawrence’s death and published as a lithograph by Joseph Dickinson.