We are excited to be showing at TEFAF, which opens next week. As always, we are taking a select group of very beautiful paintings, drawings and sculpture to exhibit. Amongst the highlights is a little-known portrait by the first President of the Royal Academy and the leading portrait painter in eighteenth-century Britain, Sir Joshua Reynolds. Depicting Elizabeth Rolleston and her son Samuel, the painting is preserved in excellent condition, having remained with the family since it was completed.

The portrait was commissioned by the Southampton based merchant, Samuel Rolleston, in 1776 shortly after his marriage to Elizabeth Carr of Newcastle and the birth of their first child, also called Samuel. By 1776 Reynolds had also established a systematic method of determining the attitudes chosen for portraits, keeping a portfolio of engravings after his own and other artists' works from which sitters could choose and adapt poses.  The portrait of Elizabeth Rolleston was based upon a successful pose Reynolds had used to depict Elizabeth, Viscountess Melbourne and her son Peniston Lamb in 1770. It is likely that Samuel Rolleston was shown the engraving of Lady Melbourne made by Thomas Watson which had been published on 10 February 1775, selecting it as an appropriate model for the portrait of his own wife and son. Reynolds was, at this date, experimenting with the relationship between mothers and children, producing a sequence of portraits of patrician sitters and their offspring arranged in complex poses. The pose Reynolds adopts in his portrait of Elizabeth Rolleston is not a precise replication of that used in his portrait of Lady Melbourne, it is a further elaboration; the infant Samuel Rolleston is depicted carefully held by his mother, with his right hand raised, playing with the plait of Elizabeth Rolleston’s hair. The portrait of Elizabeth Rolleston and her son is a hugely sophisticated solution to a compositional problem Reynolds had encountered in attempting to show his female sitters both engaged with their active child and looking at the viewer. 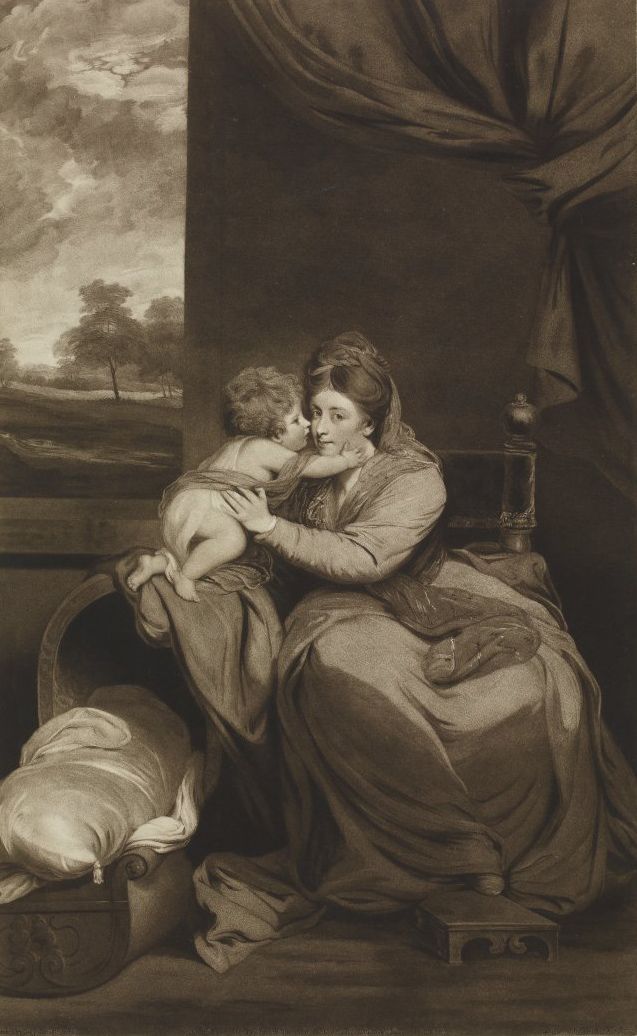 In each of this sequence of grand female portraits, the sitters are shown in loose, classical costume. They can be viewed as a deliberate exercise in what Reynolds referred to in his fifth Discourse of 1772 as the ‘Historical Style’, which endowed the figure with the ‘simplicity of the antique air and attitude’. An effect accentuated by Reynolds’s choice of costume; it was a form of dress Reynolds often adopted in his portraits of aristocratic women, especially during the 1760s and 1770s. In doing so, Reynolds aspired ostensibly to transcend the vagaries of contemporary fashion. Reynolds produced a second sequence of portraits of mothers and children in the 1780s, but rather than continuing to depict them in classical costume, he showed them in modern dress culminating in his dynamic depiction of Georgina, Duchess of Devonshire exhibited at the Royal Academy in 1786.

Reynolds’s Ledgers reveal that Samuel Rolleston senior made two payments for the portrait. The first on July 18, 1775 for 50 guineas. Listed in Reynolds’s surviving Ledger as ‘First Payment’, this follows what we know of Reynolds’s custom of taking a sum on deposit and receiving the balance on completion. Reynolds received the second payment from Rolleston on July 1776 for 55 guineas. This raises the interesting question of precisely how many paintings Rolleston had commissioned. In September 1777 Reynolds wrote to the Liverpool merchant and collector, Daniel Daulby: ‘my prizes – for a head is thirty-five Guineas – As far as the Knees seventy – and for a whole-length one hundred and fifty.’ We would then expect the present portrait, a conventional ‘half-length, to have cost only 70 guineas, rather than the 105 guineas Rolleston paid. The most likely explanation is that Rolleston in fact commissioned two portraits, the present picture and a reduced version, or ¾ size portrait of 35 guineas. Just such a painting exists, having been sold at Sotheby’s, New York January 11, 1996 (lot.213).

The portrait of Elizabeth Rolleston and her son Samuel passed to Samuel Rolleston, who would have an eventful career in Britain’s burgeoning Empire. Appointed to the East India Company’s civil service in Bombay in 1794, en route to India the ship he was travelling on, The Ganges, sank off the Cape of Good Hope and he left an account now in the British Library. The portrait remained with his descendants at Great Pan Manor, Whippingham on the Isle of Wight, unknown to scholars, despite being exhibited in Birmingham in 1931. Boldly painted, beautifully preserved and showing Reynolds’s fascination with depictions of mothers and their children, this is an important addition to Reynolds’s oeuvre.